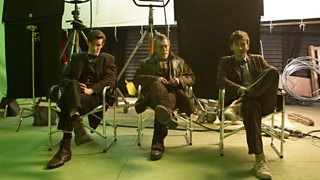 Doctor Who: The Day of the Doctor has scooped a BAFTA Television Award, the win coming in the Radio Times Audience Award category. This means the accolade was voted for by you and we’d like to thank everyone who helped the show’s fiftieth anniversary adventure achieve such special recognition.

It tops off a great few weeks for Doctor Who, triumphing at the BAFTA TV Craft Awards, receiving a number of Hugo nominations along with a nomination for ‘Best of British’ in the Freesat Free TV Awards!

Don’t forget, you can still enjoy many great clips and behind the scenes extras for The Day of the Doctor, and big thanks again for everyone who voted for us!

Frank Skinner to Appear in New Series of Doctor Who

Foxes to Appear in New Series of Doctor Who