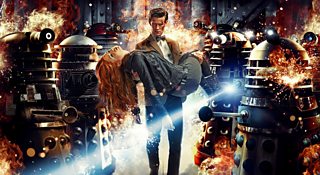 The Doctor and Amy are surrounded by Daleks in the new series of Doctor Who.

Here’s the stunning new image that’s sure to increase levels of anticipation for the new series of Doctor Who!

The image shows Amy Pond being carried by an injured, grim-faced Doctor. They’re both surrounded by Daleks that have been encountered during different eras of the Time Lord’s travels.

A Dalek on the right of the picture does not have any of the vertical grille-like slats that have become a familiar feature, indicating it’s a version the Doctor faced when he first met his oldest enemies on Skaro. And on the left there’s a Special Weapons Dalek, last seen in the 1988 story, Remembrance of the Daleks.

It’s a fiery and exciting sign of what’s to come in the new series!

And don’t forget, you can see the new trailer, right here from 6am today!

The New Trailer and More!

At Long Last, Here It Is: The Series 7 Trail