Jenna Coleman is Leaving Doctor Who 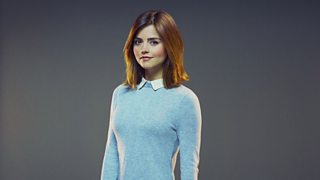 It’s been officially confirmed that Jenna Coleman, who plays Clara Oswald, will leave Doctor Who during the new series which starts tomorrow, Saturday 19 September.

However, it’s not been revealed exactly when Clara leaves and the question many are already asking is how will she part company with the Doctor?

Jenna Coleman made her Doctor Who debut on 1 September, 2012 as Oswin Oswald in Asylum of the Daleks. She returned on Christmas Day of that year, playing Clara and remained with the Eleventh Doctor from the following episode, The Bells of Saint John, onwards. She stayed on board the TARDIS for all of Peter Capaldi’s episodes to date and after filming for the last series finished, Peter commented, ‘Jenna has been absolutely brilliant. I think she’s wonderful in the show, and she’s my favourite companion.’

But Series 9 sees the Impossible Girl’s departure although the how, why and when are all questions we’ll have to watch the new adventures to find out…

Whatever happens, we’ll bring you the inside info first but for the time being we’ll prepare to say goodbye to Clara and good luck to Jenna. We’ll miss them both.

Clara’s best moments!
What’s happening with the Doctor and Clara in the new series?
Why Clara has the BEST life!

Mission DALEK: The Winners… And More!

Ten Reasons why we can’t wait for episode 2…