How 20 years of the web has reshaped our lives

Can you come up with a better title for the series than 'Digital Revolution'?
Stephen Fry certainly hopes so, as he called out to his Twitter followers to join the #bbcnamestorm this morning: 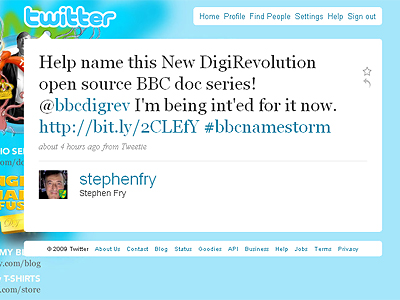 You may have noticed that our website refers to the production as 'Digital Revolution (working title)'. This is because we have yet to decide upon a name for the series that will go out on BBC Two in early 2010.
In the continuing spirit of the open production, we thought we should give our users the opportunity to offer their own opinions as to the name of the series - and join us in a massive, open brainstorm or 'namestorm' for the series. This is a documentary that seeks to chart the course of the 20 years of the World Wide Web and the remarkable changes it has brought to our lives:
So, what would you call the series?

What's wrong with the name Digital Revolution? Well, we don't feel that it sums up the power and excitement of the web. It sounds too much like something that might have begun in the 1940s; too much like a make of electronic stopwatch.
The production team has already come up with some ideas for potential titles, a list of which I've provided below to give you an idea of the ground we have travelled.

Please give us your suggestions for the series title as comments below (or via Twitter to @bbcdigrev using the hash tag #bbcnamestorm) and we'll add them to our list for consideration. We'll regularly update you on the current front runners and favourites to help keep the process moving.
Names that have come close:
.Revolution
The revolution Machine
Only Connect: the Web Revolution
Civilisation Rebooted
Hope, Hype and Hyperlinks
The Revolution Logs On
World Without Walls
A World Connected
The Electric Enlightenment
How the Web Changed the World
Names that haven't:
How the Web was Spun
Clickstream
Generation Web
The Battle for the Web
Wild Wild Web
Spinning the Web
The WWW. Revolution
World Wide Revolution
i-world
Viral
Viral World
The Connected Society
Age of Viral
Exponential
The Day the World went Viral
The Web that spins the World
i-life
Life in the Download
Cyber Reality
Web Heads
All Webbed Up and Nowhere to go
World Wide Web-olution
The New Web Order
Tangled: a new history of the Web
The Revolution will be Hyperlinked
Connections and Chaos
The Crowd Connected
The Power of Connection
World in Overdrive
The World is Out There
Connection, crowds and control.
Raging Web
The Pandora Machine
High Wired
Magic at your Fingertips
Opening the Machine
Keys to the World
Wizards of the Web
Caught in the Web
Paradise Rebooted
You, me and the Machine
Beyond the click
You can see where we've been from the ridiculous to the sublime and back again. Sparking any ideas?
Let the namestorm begin.
PLEASE NOTE: this is not a competition, nor is it a vote. We are looking for suggestions from which the production team will choose a longlist (deadline 15 November 2009). The series producer and executive producer will take a shortlist of six names to BBC Two, and they will choose at least three of these from the longlist of your names. The final decision will be made by the BBC.
Many thanks for your suggestions.
Share this page

The Virtual Revolution looks at how the web is shaping our world. Previously known as Digital Revolution (working title), it has been an open and collaborative production, which asked the web audience to debate programme themes, suggest and send questions for interviewees, watch and comment on interview and graphics clips, and download clips for personal use and re-editing.

You can stay up to date with The Virtual Revolution Blog via these feeds.