McQuaid under the spotlight in cycling's darkest hour

Pat McQuaid, president of world cycling's governing body the UCI, described it as the biggest crisis in cycling's history.

Stripping Lance Armstrong of his seven Tour de France titles and telling him he had no place in cycling, McQuaid nevertheless insisted the sport had a bright future.

But while the UCI may feel it has drawn a line under the affair by rubber stamping the United States Anti Doping Agency's (Usada) incendiary report on Armstrong, McQuaid and the UCI still have some searching questions to answer.

Alongside its verdict on the Usada case, the UCI delivered a bulging pack of rebuttals which attempted to clarify some of the other issues raised in the two-year investigation. 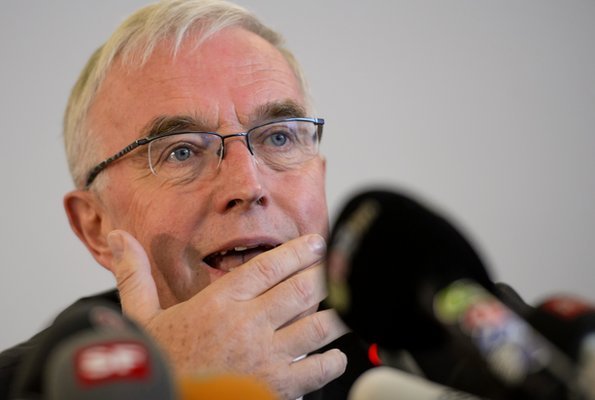 There are still too many questions needing an answer from Pat McQuaid and the UCI. Photo: Getty

Among the hundreds of pages of evidence - mostly gathered from Armstrong's former team-mates - is an alarming claim that Armstrong paid the UCI $100,000 for the fight against anti-doping.

Floyd Landis, a former colleague of Armstrong's who now admits to using drugs, claims this was hush money to cover up a positive test for EPO collected from Armstrong during his victory in the Tour of Switzerland in 2001.

The Usada report details how the head of the Lausanne laboratory which carried out the testing reported a number of samples with suspiciously high levels of EPO. Dr Martial Saugy says when he asked the UCI about the findings, he was told one of the samples belonged to Armstrong but no action was taken as the levels of EPO were not sufficiently high to record a positive test.

The UCI says that was the end of the matter - even though testing procedures now would have deemed the test sufficient to record a positive finding.

Suspicions have been aroused because some time after the suspicious finding, in 2002, Armstrong visited the lab in Lausanne and promised the large donation to the UCI.

The UCI vehemently denies any claims of a cover up and insists the payment of the money - used to buy a blood analysis machine which is now housed at the Wada-accredited laboratory in Lausanne - was unrelated.

But why were the UCI taking money off Armstrong when they knew he had at the very least recorded a suspicious finding for EPO? By the time the money was paid in 2007 there had been countless allegations made in the media about Armstrong.

And how many sports do you know which accept large donations from leading athletes to fund the fight against doping? Even if it is all above board as the UCI claims, it leaves the organisation open to claims of a conflict of interest and poor judgment.

Anne Gripper, a former medical commissioner of the UCI, says Armstrong was so influential that he basically administered the organisation's rules.

McQuaid dismissed Gripper's comments - as you might expect - but it is hard to escape the impression that here was a sporting body completely in thrall to its leading superstar - and biggest revenue generator.

With hindsight, McQuaid says, accepting the money from Armstrong was a mistake. But, incredulous as this might seem, he revealed during Monday's news conference that some leading teams also paid money to the UCI to help finance the battle against drugs. Which teams? And how accountable is this money? What exactly is it used for?

With such blurred lines between regulating the sport and promoting it, it's not hard to see why the UCI is today facing another long battle to save cycling's reputation.