Will London 2012 change Britain for ever?

It has been a genuine privilege to cover the Olympic and Paralympic Games. To witness first hand the many unforgettable sporting moments has been something very special.

But is Britain a different country and London a different city today because of the festival of sport that has just finished? And, more importantly, will it make a lasting impact on us all for years to come, long after the memories have faded?

The successful staging of the Games has given the country a massive confidence boost at a time when there are so many concerns - economic and otherwise - to trouble us.

From the creation of the Olympic Park in a run-down part of east London, to the torch relay and the smooth running of the creaking Victorian transport infrastructure, the Games have been delivered with precision and impressive purpose.

All the anxieties of the preceding seven years - over costs, security and transport - now seem slightly ridiculous. They weren't. We were right to be nervous. Staging the Olympic and Paralympic Games are the biggest undertaking any country can take and do not come cheap at £9bn of public money.

On many occasions, as with the G4S security shambles or the sometimes frustrating ticket sales process, the media were right to be critical. But from the moment Danny Boyle's opening ceremony bounded into life, presenting a vibrant and confident vision of modern Britain, the concerns have melted away. In their place came an intoxicating, mesmerising and very un-British wave of happiness and pride. Even during that five-day wait for Team GB's first gold medal. the smiles and enthusiasm remained undimmed.

I remember that first day of British gold, watching as rowers Helen Glover and Heather Stanning powered to victory at Eton Dorney, accompanied by a wall of noise usually reserved for football grounds. And then to Hampton Court to see a carnival of humanity lining the streets around the old palace as cyclist Bradley Wiggins added Olympic gold to his historic Tour de France victory. The sun was out and it was simply great to be British.

As the gold rush gathered pace, creating new stars and confirming British icons, so the national mood became more and more joyous. Everyone seems to have been touched. In the United Kingdom, 50.2m people - 87% of the population - watched at least 15 minutes of Olympic action.

The Paralympics, too, captivated the country in a way never seen before. Television audiences have been huge - 11m for the opening ceremony and 3.6m for the opening night of athletics - but the fact 2.5m people bought tickets to see disability sport for themselves tells an even greater story.

Who would have thought people would be having water-cooler conversations about an amputee sprinter called Jonnie Peacock, who won 100m gold by beating legendary South African Oscar Pistorius, the pioneering face of Paralympic sport? 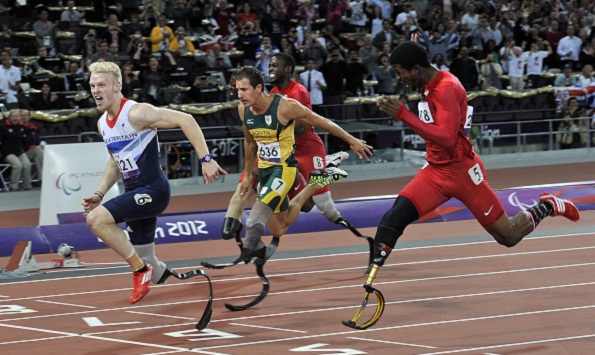 As Lord Sebastian Coe said in his closing address on Sunday, we will never view disability or disability sport in the same way again. London and Britain have taken the Paralympics to a new level, the greatest Games ever according to Sir Philip Craven, the president of the International Paralympic Committee. I asked one minister whether he ever imagined we would be talking on the final Sunday in such celebratory terms. "Never in my wildest dreams," was his reply.

While there was confidence among the organisers that the Games would be a success, they expected many more bumps in the road. There were some issues to deal with - empty seats and, believe it or not, cyber hackers from Iran and the Far East targeting the official London 2012 website - but, as with most problems, they were repelled. For the daily Cobra meetings, normally used to dealing with diplomatic rows, security threats and Heathrow meltdowns, this was the stuff of trivia. For a country with such a poor track record in delivering sporting grand projects, here was one we got right.

Some of this feelgood factor may be superficial, of course. Some of it may be because I have spent the Olympic and Paralympic Games in London and not in Wales or Scotland where the mood may have been very different. But I don't think so. So why was London 2012 such a triumph?

Team GB and ParalympicsGB delivered success in abundance, lighting the touch paper for the party atmosphere that accompanied the events. Britain won 29 golds at the Olympics and 34 at the Paralympics. Although the Paralympians did not finish second in the medal table as planned, they exceeded their medal target of 103 medals overall, ending with 120, 18 more than in 2008.

From Usain Bolt and Michael Phelps to Oscar Pistorius and Alan Oliveira, there were some amazing international moments, too. Sporting federations spoke of the preparations being among the best they have ever encountered, with the village and venues designed to bring the best out of the competitors.

The biggest cheers at the Paralympics closing ceremony were reserved for the 70,000 staff and volunteers, otherwise known as the 'Games Makers'. They deserve every bit of credit. They have given their time freely and made these Games function smoothly.

In so doing, they may have offered us an unexpected legacy from these Games and done more for the Big Society than Prime Minister David Cameron could have ever hoped for. As for the military, their involvement may have been clouded by initial controversy, but their cheery and professional presence made a huge difference and only added to the sense of national occasion.

But these Games were sold on the promise of a legacy. The overwhelming success has created an even greater opportunity. The challenge now for Government and governing bodies is not to drop the ball. Already, clubs and federations are reporting a big spike in interest. I have been told rowing clubs are experiencing an upsurge in interest from teenage girls on the back of the success of Britain's women, while 30,000 people have been trying to join hockey clubs since the close of the Olympics.

The Government's commitment to maintain funding for elite sport at the same level as in the years leading up to London was a significant moment and should allow Britain's athletes a bit of certainty ahead of the 2016 Games in Rio de Janeiro.

But while elite sport is now a well-oiled industry churning out medals every four years, school sport and grass roots participation remain the missing links in the chain. School sport, in particular, is a mess that has suffered damaging cuts at exactly the wrong moment. Ministers and Education Secretary Michael Gove must now rush to put this right while the warm glow of London 2012 is still being felt.

The London organising committee's slogan of 'Inspire a Generation' sounded corny at first, but there have been so many spellbinding moments that young people simply must have been touched by sport. This opportunity must not be wasted and the pride, passion and purpose which made London 2012 such a success must now be applied to delivering proper, lasting change to our sporting culture and infrastructure. As Lord Coe reflected after the last burst of fireworks had lit up London, that job is only just beginning.