Will the Paralympics be able to match the success of the Olympics?

Comparisons will inevitably be drawn in the coming days between the Olympics and Paralympics. The country was so captivated by the 17 magical days of the Olympics that they are clearly going to be a tough act to follow.

But, as Paralympics chief Seb Coe told me on Wednesday, the two events are all part of the same extraordinary summer of sport. They are not in competition with each other and, over the next 11 days people, will be just as amazed by the exploits of Oscar Pistorius, Ellie Simmonds and David Weir as they were by Mo Farah, Usain Bolt and Michael Phelps.

It is worth remembering, however, that London's Paralympics mark a potential turning point for the movement. Not only is there a sense of the Games coming home 64 years after Dr Ludwig Guttmann developed the original concept of disability sport at Stoke Mandeville Hospital, but there is a sense of the Paralympics using the launchpad of London to move into an even brighter future. 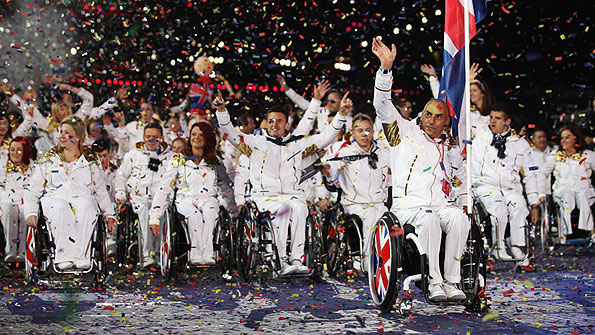 The ticket sales for these Games are quite extraordinary. Locog, the organising committee for both the Olympics and Paralympics, is confident all 2.5m tickets will sell out. Paralympians will be competing in front of crowds unlike any they will have seen before.

Commercially the Games are trying to break new ground. This is the first time an organising committee has run a competitive tender process for the domestic TV rights. This resulted in Channel 4 winning the exclusive rights, breaking the long standing relationship with the BBC. Channel 4 are thought to have paid around £8m or £9m for the rights - far more than the nominal fee the BBC paid for the 2008 Games in Beijing.

The vast majority of that money will be paid straight to the production company which provides the coverage and it is debatable whether Locog will see any profit from this. But this is a nuanced point. The implication from the tender process was that this is now an event that does not need handouts from organising committees or broadcasters because it has genuine media value.

To emphasise the point, these Games are being broadcast in more countries than ever before - over 100 - although it is worth noting the attitude of some of the biggest territories. American broadcaster NBC, the biggest media partner of the Olympics, will show just four highlights shows on network television, with the majority of coverage appearing online.

This is also the first time an organising committee has sold specific sponsorship rights for the Paralympics. The main deal with Sainsbury's is worth about £20m but 15 of the 55 London 2012 backers - including most notably Panasonic and BT - have also paid for extra rights to the Paralympics.

The organising commitee boasts this is the most commercially successful Paralympics in history and while the £30m income is relatively small in comparison to the overall £2bn budget it shows the value of the event is growing.

For the athletes, the profile is increasing, too. Double Paralympic champion Simmonds is plastered all over one building on the edge of the Olympic Park, while there are clearly now greater opportunities for Paralympians in London.

So how will the Paralympics be judged?

There can be no doubts about the public appetite for the Games. But many of the 2.5m ticket holders won't have seen athletes with physical, visual or intellectual impairments. They will not have come across goalball or understand immediately why there are 29 different 100m finals in athletics, or 148 gold medals on offer in swimming. Compare that with the 34 up for grabs at the Olympics.

But, ultimately, the British public understand world-class competition and I have met no-one who is not intrigued and excited by what lies ahead.

As with the Olympics, a lot will depend on whether there are big sporting moments that engage the country and the rest of the world. Home success will be critical, too. The British Paralympics team, known as ParalympicsGB, are aiming for their biggest medal haul yet, targeting 103 and second place in the table.

But the wider mission is to use the spotlight to challenge perceptions of disability. British Prime Minister David Cameron says it is crucial the Paralympics helps change people's views.

There are campaigners, however, who feel uncomfortable about a government championing the Paralympics and disabled sport at the same time as they are overseeing cuts to welfare support for people with disabilities. More than half of disabled people in the UK already live below the poverty line.

Some campaigners actually argue that the Paralympics - a celebration of what extraordinary people can do rather than what they cannot - sets the battle for equality for ordinary people back.

For my part, it is hard to see how the next 11 days can be anything other than a positive influence on the public perception of people who have achieved so much despite disadvantages most cannot begin to understand.

That is not to draw the focus away from the sporting achievement. It is just to emphasise the point that what makes the Paralympics so rich and so distinctive is the combination of amazing sport with incredible stories of human spirit and endeavour.

Even the Olympics struggle to match that.