Turn the clock back five weeks ago and the BBC One late-night bulletin was already leading on the Olympics.

But it wasn't the sort of story we've become used to over the last 16 days of breathtaking sport. The fall out from the G4S security shambles was still playing big and ministers and organisers were scrambling to find a solution.

Re-watching the news from that Sunday night is like being transported to another time.

That's not to say the failure of G4S to recruit and train the required number of security guards wasn't a story. It was. The extra reliance of the military in plugging the gap has been one of the best features of London's Games.

What the story reflected was the heightened anxiety London, the media and the country were feeling as the Olympics approached. After seven years of build-up, the level of international pressure on Britain was intense.

How different it all feels now. From the moment Bradley Wiggins rang that giant bell to start Danny Boyle's wonderfully crafted opening ceremony the fears have melted away amid a joyous celebration. A celebration of sporting achievement, of the country's passion, heritage, and a rarely witnessed can-do culture. It has delivered a project Sebastian Coe called "the most complicated task Britain will ever undertake".

The International Olympic Committee president Jacques Rogge diligently avoids comparing hosts. But tellingly he said today that London had refreshed the Games in many aspects.

His words at the closing ceremony will be eagerly anticipated. But after a fortnight when millions of people have revelled in the drama of the Games, it doesn't feel like the country is hanging on his final assessment. They know these Games have been a triumph.

They have been a triumph first and foremost because of the quality of the sport. 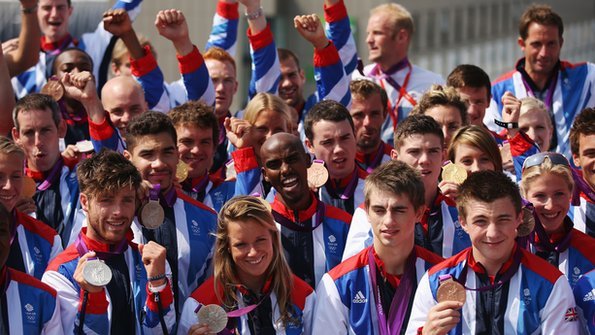 Team GB won a staggering 64 medals, 29 of them gold. The best performance of the modern era and arguably of all time. And to think the Sun splashed on day four with the headline: WANTED: GOLD MEDAL. The request was met again and again as the country drowned in home success.

We all expected the rowers and cyclists to come good but the big question was always going to focus on whether Great Britain could deliver more medals across more sports. The statistic that 16 different sports delivered medals here tells you they did.

Of course, not everything has gone to script for every sport. Swimming missed their medal targets and an internal review is under way - although some senior Olympic figures are asking why performance director Michael Scott was re-appointed before being asked to head up the review into why his team didn't win the five medals they predicted.

There are also bound to be some questions asked about athletics. Mo Farah, Jessica Ennis and Greg Rutherford produced that dazzling, golden 45 minutes in the Olympic Stadium with Farah repeating his exploits in the 5,000m a week later. But there were also some disappointing performances - capped perhaps by the men's sprint relay team dropping the baton again. Head coach Charles Van Commenee missed his own target of eight medals by two.

He said before the Games started he would quit if he didn't meet his own demanding predictions and today he told the BBC he would take a break before deciding his next move. But there is already a gathering campaign to keep him in post. Lord Coe gave an emphatic response, saying he hoped Van Commenee stay until the World Athletics Championships in 2017, which are being held in London.

Other sports such as wrestling, basketball, handball and volleyball may find they are struggling to receive the same level of funding in the run-up to the Rio Games in 2016. Here they qualified because London was staging the Games. That won't happen in Brazil.

But these are quibbles set against a backdrop of incredible success. The overall target set by UK Sport of at least fourth place was smashed with Britain coming third. The challenge now is to ensure funding for elite athletes is maintained so that Britain doesn't experience the post Games drop-off so clearly illustrated by Australia at these Games. There they won 16 gold medals and 58 in total. Twelve years on, it is seven and 35.

Today's announcement by the Prime Minister that funding will be kept at the same level for the last two years of the Olympic cycle is a big boost for sport, even if he may be accused of trying to make political capital out of the feel-good factor created by the Games. In truth this is small change to the Government.

Even if Team GB hadn't done so well, the quality of the big sporting moments might have made up for it. Usain Bolt's double treble, David Rudisha's world record run in the 800m, the Jamaican men and American women's sprint relay performances, Michael Phelps becoming the most decorated Olympian in history, watching USA basketball's dream team in action at the North Greenwich Arena. In all, 44 world records have been set and 117 Olympic records - backing up Coe's claims to provide a Games that would allow the athletes to compete at their best.

But some of the most memorable moments came not in sporting triumph but in the taking part. Double amputee Oscar Pistorius broke new ground just by competing in the Games - the first paralympian to do so on the track - and every one of the 204 countries sent a delegation which included female athletes.

There has been just one positive test for a banned substance since the Games started and, although a big doping scandal can't be ruled out until all the samples are tested, it does seem that drugs will not overshadow these Games.

The disqualification of eight badminton players for trying to fix the result of their matches provided a jolting reminder of sport's less attractive side but despite all the threats from Rogge and other administrators there has been no evidence of corruption or match-fixing involving any athletes.

On the organisational side - London's transport network didn't go into meltdown, for all the fears about security staffing levels there don't appear to have been any major problems, the Olympic park and the venues have been outstanding (and the decision to incorporate the city's many landmarks inspired). The volunteers have been friendly and helpful and the crowds passionate and very, very loud.

Tickets and empty seats are the one blot on the landscape. The sight of rows of unfilled seats in areas reserved for accredited members of the Olympic family - including us the media - played out badly. But to Locog's credit they moved quickly to pull the international sports federations into line and to sell seats that weren't genuinely needed. Any that couldn't be filled were given to members of the military or local school teachers and pupils.

Despite that, the story hit a raw nerve with the public who were so desperate to see history being made at close quarters. Even now fans I have talked to on the javelin train from Stratford to St Pancras, or on the tube, say they wish they could have got to see more. That will always be a factor of any Olympics - supply will never meet demand. But the IOC has got the message about the ticketing system and will review it for the next Games in Rio de Janeiro.

It seems amazing to even be talking about the next Games so soon. Four years ago on the closing day of the Beijing Olympics the rhetoric from London 2012 officials was very cautious, deliberately designed to play down the idea that Britain could even hope to emulate China's Olympics. The shock and awe of it all was just too much. London's would be the budget Games and the question was how on earth do you follow that?

After the last three weeks the question might now be: How can anyone hope to follow London?