Amid all the talk of Great Britain's gold rush, it's been easy to overlook the fierce battle going on at the top of the Olympic medals table.
The United States and China are locked in a struggle for sporting supremacy and with only three days of competition left it's set to go to the wire.

Four years ago in Beijing the world's most populous nation finished first for the first time in history with 51 golds, the US some way behind with 36. Americans hoped this might be a one-off inspired by the Chinese playing host to the Games.

Four years on in London it's clear that hope was in vain. Unlike the rest of the world (and crucially the International Olympic Committee), the US counts overall medals and not golds as the true measure of sporting success. The problem for America is that China are even closing in on that too. 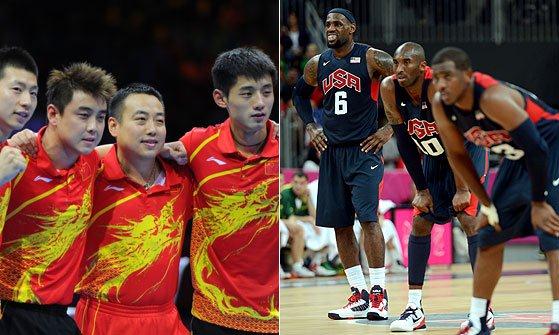 So how have they done it?

There are sports such as table tennis, diving, badminton and gymnastics in which China have always enjoyed success.

But over the last decade and in the run-up to the Beijing Games the country's sports authorities targeted less popular disciplines contested by fewer countries (sound familiar Great Britain?).

Women's weightlifting is a good example of this. Now the aim is to win in the most competitive pursuits - swimming and athletics. Even rowing is on the radar.

What is all the more extraordinary about the contest between China and the US is that it is still relatively young. China didn't compete in the summer Games for three decades following a dispute with the IOC over the political status of Taiwan.

The team only returned in 1984 and in the space of seven Games they have gone from also-rans to the most powerful sporting force on the planet.

China's vast population obviously helps provide a rich seam of talent. But there's more to it than that.

Critics say the uncompromising training regime for young Olympic athletes is too tough. Others, such as the American swimming coach, John Leonard have gone even further, questioning whether emerging new talents such as the double gold medallist Ye Shiwen are too good to be true.

That sniping is as much a reflection of China's past doping scandals as it is a sign of how threatened the US may feel from China's growing sporting presence. It should be stated of course that there is absolutely no evidence to suggest Shiwen has done anything wrong other than swim incredibly fast at a young age.

When another teenager, America's Katie Ledecky beat Rebecca Adlington comfortably in the 800m freestyle there was no nudging and winking in Olympic circles. It was celebrated for what it was - a remarkable performance on the toughest stage of all.

It's in the pool that the United States has enjoyed its biggest successes here.

Michael Phelps and Missy Franklin spearheaded America's dominance as they won an incredible 16 of the 33 golds available. They head the table so far in athletics while the latest incarnation of basketball's dream team are on course to win their 14th Olympic title.

Following their quarter-final victory over Australia on Wednesday night Kobe Bryant, the highest paid player in the NBA, said that finishing top of the medals table at the Olympics was a great source of pride for the country.

He added: "They (China) do well every Olympics and we are just trying to do the best we can to hit the top spot. You take a sense of pride in it. It feels good to feel like your country is well represented and your country has top spot."

After the collapse of the Soviet Union, the United States might have expected to occupy the top spot for decades to come. China's rise means they can no longer take that for granted.