Those empty seats: Is there a solution?

For the members of the public who tried in vain to get Olympic tickets during the various ballots, the sight of empty seats on television after the first full day of competition must be baffling and irritating in the extreme.

London 2012 chairman Sebastian Coe insists it won't be an issue throughout the Games but adds that he totally understands people's frustrations and is working hard to ensure the seats are filled.

So why are there empty seats?

Locog says the seating areas are not for general members of the public or for sponsors but are set aside for accredited members of the so-called Olympic family. This includes International Olympic Committee members and officials, representatives from international sports federations and national Olympic committees, athletes, coaches and team officials and, not forgetting us, the media. 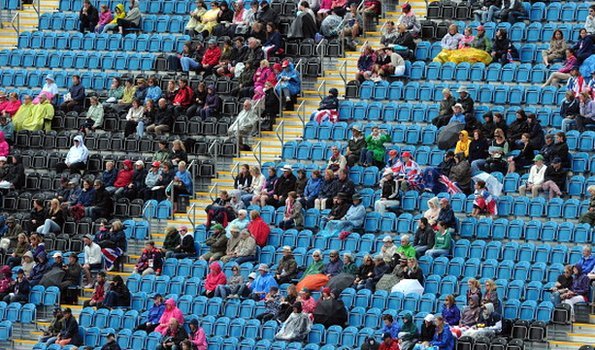 Shots of empty seats being beamed around the world are frustrating for Locog. Photo: AFP

The biggest accredited group - after the media - are the international sports federations and it is understood Lord Coe and Locog will have some frank discussions with the federations about why the seats are not being filled.

And, says Coe, if federations aren't going to take up their allocation then there are plans to ensure they are filled so there are no longer shots of empty banks of seats being beamed around the world.

The difficulty is that even if the federations now say they don't need as many seats, the empty spaces are in specifically accredited areas where tickets can't be sold to members of the public. That restricts Locog's options, although it could potentially reduce the size of the accredited areas and sell some of the tickets - as it did with the gymnastics at the North Greenwich Arena on Saturday.

Giving the seats to pre-accredited groups of teachers and students from east London is one option. Another is to give the seats to off-duty members of the military who are already in the park as part of the huge venue security operation.

But that does not help get more tickets at cheap prices into the hands of ordinary people who felt they missed out.

There are still tickets for events being released regularly on the London 2012 website, and they are being snapped up almost immediately.

What's interesting about all this is that four years ago in Beijing, the Chinese organisers had exactly the same problem. When it became clear that TV images of empty seats were playing badly around the world, they rushed in yellow shirted volunteers to fill them.

No one would begrudge members of the military being rewarded for their commitment to the Olympics by getting to watch a bit of the action. But critics might ask: what's the difference between what the Chinese did and filling empty seats in London with soldiers or local students?

After one day of full competition it seems way too soon to be criticising Locog for the empty seats. The public seating areas do seem to be packed, even though the pictures on TV from gymnastics, beach volleyball, indoor volleyball, canoeing and the tennis at Wimbledon tell a different story.

The sponsors were keen to confirm the empty seats were not their doing, P&G, Visa, McDonald's and Coca-Cola all putting out statements on Sunday making it clear they were filling their allocations with winners of competitions, partners, customers and employees.

But ticketing remains an extremely sensitive area for Locog. And if the empty seats continue into a third or fourth day without being properly resolved, then Coe and Locog may find they need to do more than simply have a few frank conversations with members of the Olympic family.