The disappointment on The Mall was palpable.

In the VIP seats London 2012 chairman Sebastian Coe and Mayor Boris Johnson looked a bit downbeat. The Prime Minister David Cameron, all poised to do celebratory interviews with the media, suddenly became unavailable.

For months now Mark Cavendish and the road race has been built up as the real Olympic opening ceremony.

So to come in 29th was hardly the start Team GB and the organisers wanted.

To criticise Dave Brailsford's British cycling team for not delivering is clearly ridiculous. No other sport has consistently produced like cycling has over the last few years.

But something clearly went wrong for the 'Dream Team' on the 250km circuit.

Part of it was obviously out of their control. As Cavendish said afterwards there are limits to what even Team GB can do.

"There was a group of 22 who got away and we couldn't pull them back," said the 2011 world champion.

"The guys are sat there, they are spent. They have got nothing left in the tank." 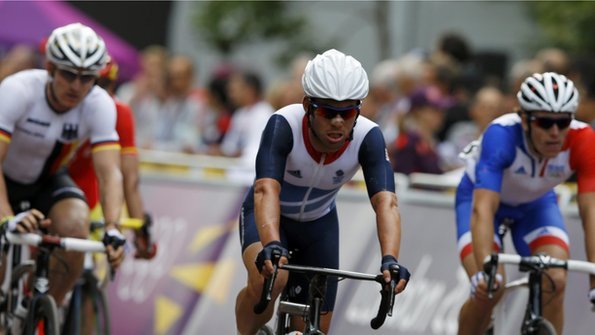 There will also be some who will question why organisers designed a course which seemed to undermine the home team's chances of winning gold on day one.

But perhaps the harder questions will come from those who wonder whether the magnificent Team Sky mission to win the Tour de France has had an impact on the Olympic medal quest.

Brailsford, British cycling's performance director, has insisted that is not the case. I put it to Cavendish after the race and he snapped at me, saying I shouldn't ask stupid questions.

His raw reaction was a sign of just how disappointed he was following the race, which was won by Alexandre Vinokourov of Kazakhstan, a cyclist banned for doping in 2007.

British cycling and London's organisers will not panic - this is top-class sport and nothing is certain. But this weekend is all about building momentum.

The focus will now switch to the women's road race on Sunday with defending Olympic champion Nicole Cooke and Lizzie Armitstead and then in the pool with Rebecca Adlington.

After the triumph of the opening ceremony on Friday, British fans will be hoping they can get the gold rush going.