Fifa reputation on the line

For months now Fifa has been facing a fight to save its reputation amid the drip, drip, drip of corruption allegations.

But none of the claims made so far by Lord Triesman or the media come close to the potentially seismic effects of today's developments.

Never before has a member of the Fifa executive committee levelled such serious allegations against two of fellow members of that committee. For years Fifa has dealt with stones being thrown from outside the tent. Today, for the first time they are coming from inside the organisation.

At this stage we still don't know the exact nature of what Chuck Blazer is alleging. All we know from Fifa's statement is that the allegations include bribery claims. It is not clear whether those bribery claims relate specifically to the two executive committee members being accused - Jack Warner and Mohamed Bin Hammam - or to the two Caribbean Football Union officials also named in the statement, Debbie Minguell and Jason Sylvester. 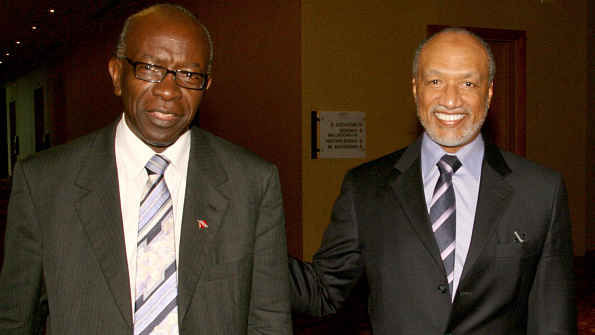 Warner and Bin Hammam have been called to a hearing on 29 May. Photo: AP

But this does seem to be the most significant series of allegations of wrongdoing ever to be levelled at members of Fifa's executive committee.

That they should be aimed at Bin Hammam, just days before he faces Sepp Blatter in the vote for the Fifa presidency, makes the timing even more sensational.

The allegations relate to a meeting Bin Hammam held as part of his election campaign in Trinidad on 10 and 11 May.

The interesting background to this is that while Blatter had already addressed members of the Caribbean, North and Central American Football Confederation earlier in the month, Bin Hammam was unable to do so, having had an application to travel to Miami refused.

Instead Bin Hammam organised his own meeting in Trinidad with the Caribbean Football Union, which makes up 30 of the 35 members of Concacaf in Trinidad.

The question which Fifa's ethics committee is likely to be asked to answer following Blazer's dramatic intervention is who paid the bill for that meeting in Trinidad? And did that potentially break any of Fifa's rules in the election race?

Bin Hammam is understood to be perplexed by the claims and was this afternoon consulting his lawyers. Blazer told the BBC today that he won't expand on what he has told Fifa until after the ethics committee has met on Sunday but one of the most fascinating question for Fifa watchers will be why and how he has turned on Warner, for years his close ally and friend in Concacaf?

Of course, the timing here is crucial. For days, Bin Hammam has been batting away rumours that he was about to pull out of the election race. At one stage the Fifa general secretary Jerome Valcke even had to go on the record denying that he had asked him to pull out.

Even assuming the ethics committee can get to the bottom of all this by Sunday evening, with so many allegations of wrongdoing now swirling around - is it right for Fifa to press ahead with Wednesday's presidential election?