The confidential emails on England's World Cup bid obtained under freedom of information requests by the BBC contain a fascinating insight into the sorts of deals and discussions that were going on in the run-up to last year's vote in Zurich.

And while there is nothing surprising or illicit, perhaps, in the revelation that the bid team were trying to get the Duke of York to use his royal connections with the Emir of Qatar to help them win votes, it is intriguing to see that England were trying to secure a voting alliance with the eventual winners of the race for 2022.

This, of course, is supposed to be against Fifa rules and Spain and Portugal were investigated and eventually let off for forging their own deal with Qatar.

It was the biggest open secret of the simultaneous elections and even Fifa president Sepp Blatter admitted he was powerless to stop executive committee members doing reciprocal voting deals.

It actually did Spain and Portugal little good in the end but the outcome of all this is that Fifa will never run dual bidding contests again. 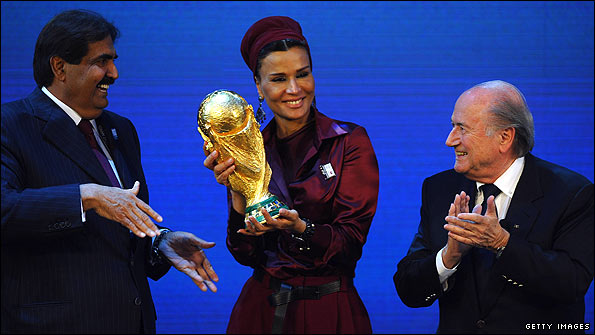 But what these emails show is that while England's bid team may have been accused of naivety and lacking political nous following the humiliation of their first round exit last December, they were in fact trying to do their own back room deals to try and get over the line.

So what was the strategy they came up with?

The emails show how the England bid team had spoken to Mohammed bin Hammam, the head of Asian football and vice president of Fifa, about the best way to secure his vote. This was significant because he carried at least another two Fifa members with him -Thailand's Worawi Makudi and Egypt's Harry Abou Rida.

Bin Hammam explained to England, however, that he would be told how to vote by the Emir of Qatar.

This is confirmed in a number of the emails we have obtained but, in particular in one note, sent by the British Ambassador to Qatar, John Hawkins, on 24 November 2010 to a Government official, Eddie Scanlon, and circulated widely among other civil servants.

It reads: "The Qatari EXCO [executive committee] member, Bin Hammam is KL [Kuala Lumpur] based but has made it clear throughout that he will do what the Emir tells him. I have been telling the FA for over a year thar the Emir's decision will be driven by what he judges is in the best interests of Qatar's 2022 bid."

So, what were the England bid team, the foreign office and the department for UK Trade and Industry (UKTI) trying to do to win that influence with the Emir?

The obvious channel would have been through Prince William, who as president of the FA, is the member of the Royal Family charged with dealing with affairs relating to the national game.

In protocol terms he would have been well placed to speak directly with the Emir and his two sons, one of whom, Sheikh Mohammed, was leading the Qatar World Cup bid.

Instead it was decided to try and use the Duke of York (who was a former president of the FA) which suggests England were trying to secure a voting alliance through Prince Andrew's role as a special representative for trade.

As far back as 31 March last year, an email from Foreign Office official Alan Collins to the chief executive at UKTI, Andrew Cahn, sets out the plan:

"The bid team suggested that the Royal Family might be able to help with promoting the bid.........They were particularly interested in Qatar because of the connection between the Duke of York and the Emir and in the visit the Duke of York will make to Malaysia. On their behalf I spoke to the DOY's office who said that the Duke was willing to help in both places but sought CVs of the Fifa members involved and to know the exact ask.

"The bid team sent me the CV on the Qatar Fifa member and yesterday asked me to speak urgently to the Duke's office to see if he would be willing to travel to Qatar before 23 April to speak to the Emir......In sum the bid team believe that the Emir might be persuaded to back competitors........and want to get him to commit to England before then and thus influence the vote of the Qatar Fifa member. With the Qatar vote might come three other Asia votes."

The email goes on:

"I spoke today to Amanda Thirsk in the Duke's office. She had consulted him. He was keen to help but they believed help by the Royal Family should be co-ordinated through the office of Prince William who is the President of the FA.

"They were not persuaded to get out to Doha before 23 April but the Duke is in the Gulf 4 to 11 May and, although the programme does not at present include Qatar, the Duke would be willing to drop in to see the Emir if the FCO [Foreign Office] agreed.

"This seems a sensible suggestion. He is meeting the Emir's influential wife, Sheikha Mozah, next week in London and is willing to raise the England bid and ask for the Emir's support."

And here is perhaps the crux of the story:

"In conversation the bid team told me that the Russians were signing lots of trade deals with Qatar and that might influence the Emir. The implication is that we should be doing the same."

Now, although Mr Cahn goes on to say that the UK probably didn't have the scope to do trade deals with Qatar to secure the World Cup (although he adds he will take advice on the suggestion) this is fascinating for two reasons.

Firstly it shows the England bid team were encouraging officials to try and secure support in ways beyond the pure technical and footballing arguments contained in their bid. 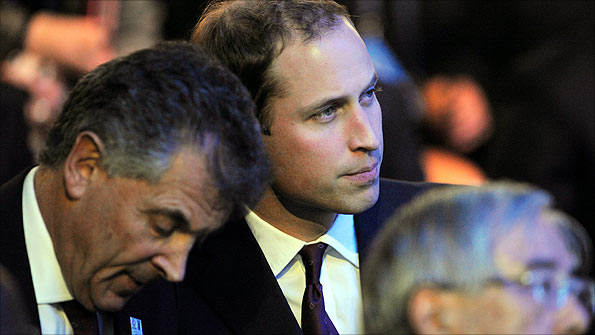 After all the discussions, England only received two votes as Russia won the 2018 bid. Photo: Getty

And secondly, it shows - rightly or wrongly - that there was a view that the Russians were doing trade deals with countries with Fifa members to win the contest for 2018.

This is alluded to elsewhere in the documents, although both UKTI and embassy officials in Qatar reject the idea that Russia is in any way better placed to secure the Emir's support via trade agreements, pointing out the already close links, via a number of British companies, with Qatar.

Shortly afterwards, an email on 13 April from England 2018 official Francesca Orpen to Alan Collins at the Foreign Office and Amanda Thirsk in the Duke of York's office, explains:

"We agree that a phone call from the Duke to the Emir before 23 April would be very helpful subject to what was said in his meeting with Sheikha Mozah last week. However we feel that a meeting between the Duke and Emir (and a small high level bid delegation) would send a strong signal about how seriously we are taking this matter......As a result we would appreciate it if in the phone call the Duke could request a meeting in early May."

The Duke of York's office told the BBC last night that he was approached by the FA but that, in the end, he didn't do any lobbying for the bid.

The state visit to the UK by the Emir on 26-28 October - and a meeting with Prince Charles - was also identified by the FA as a possible opportunity to do a deal. But while a spokesman for the Prince of Wales said a meeting did take place the countries' World Cup bids were not discussed.

The result is that while the FA had identified the need to use the Royal Family to try and win the support of Qatar, they were never able to use Princes Andrew, Charles or even William to get close to securing a deal.

In the meantime the concerns over the Russians were growing. Here, in another email from the British Ambassador John Hawkins, this time to an official called Stephen Townsend, on 23 August, he writes:

"From the commercial perspective the Russians are the most active. And it is the Russians who have been signalled to us consistently by the Qataris as the main threat to England. This was the message from Sheikh Mohammed to me and the Qatari PM made it clear to the Prime Minister that we should be "keeping a close eye on Putin".

Of course, in the end Russian Prime Minister Vladimir Putin called the election right, staying away from Zurich, playing on Fifa's concerns over the English press, and then arriving a few hours after Russia's triumph to bask in the glory as David Cameron was left embarrassed by England's two votes.

Two months earlier, in an email on 27 June, Hawkins writes to Alan Collins:

"On the Russian threat, I don't think I have much to add to what I've reported before (and told the FA direct) ie the Russians are certainly active (as the Qatari PM told the PM earlier this month "keep an eye on Putin"). And they will be using the levers they have, including commercial.

"But the Qatari/Russian relationship is not without its tensions and we can match or beat them in most areas including high level visits (of which there is more to come this Autumn) and both the energy and commercial relationships.

"However at the end of the day all of this is likely to be only of incidental importance as the Qataris will back whichever 2018 option best helps them win 2022. So, as you know, my advice has been for the FA to engage better with the Qatari FA and, ideally, come up with a deal to offer support for Qatar's 2022 bid in return for Qatari support for England 2018."

Now does any of this matter? It's three months on from the vote. England got one vote in addition to their own member, lost to Russia and Qatar shocked the football world by landing the 2022 tournament.

But what all this correspondence shows is the lengths England were prepared to go to try and win the World Cup, revealing the high level discussions which were going on in the background.

They also raise fresh questions about FIfa's bidding process and lack of transparency.

More importantly - and perhaps embarrssingly - the documents show that, whatever you think of the tactics involved in these big sporting bids, England were ultimately incapable of doing the backroom deals required.

To sum up, here's one former senior member of the bid team:

"We knew exactly what we had to do," he told me. "We weren't stupid. We could see what was going on elsewhere. But this just shows the diplomatic treacle you had to walk through to try and get anything done and why, ultimately we failed to win."