Will cricket World Cup venues be ready on time?

With memories of the chaos surrounding India's preparations for the Commonwealth Games still fresh in the mind, the country is facing more international embarrassment, this time over its plans for the cricket World Cup.

An inspection team from the International Cricket Council is due to fly to India and Sri Lanka next week to examine progress at a number of venues which have fallen way behind schedule.

The World Cup kicks off on 19 February but, Eden Gardens in Calcutta, venue for England's group game against India on 27 February, and Mumbai's Wankhede Stadium, where the final will be played on 2 April, are not finished.

It's worth remembering, of course, that every major sporting tournament faces questions about its readiness just before it starts. They always start on time and the problems tend to be forgotten afterwards.

As with last year's Delhi Commonwealth Games, the Indian authorities are sure to throw manpower at the stadiums in an effort to have them ready on time.

But if the ICC is unhappy with what it sees next week then it is prepared to take games away from those venues. Chennai could step in and stage any games which can't be played in those venues under renovation. 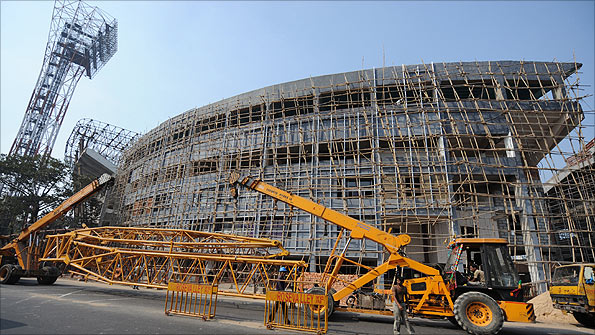 According to reports in India, Eden Gardens, the spiritual home of Indian cricket, is the biggest worry. A new roof has not been finished, many seats have not yet been fitted and a wall outside the venue collapsed.

An ICC inspection report leaked to the Indian newspaper the Deccan Herald last month highlighted Wankhede stadium and Eden Gardens as not certain to meet a 31 January deadline.

The ICC also has concerns over three venues in Sri Lanka - Colombo, Pallakelle and Hambanota - and is anxious about the way ticket sales have been handled by tournament organisers.

The ICC will be desperate for a well attended and passionate World Cup, after the 2007 tournament in the West Indies was criticised for being devoid of Caribbean charm and many matches were played in half-empty stadiums.

World Twenty20 champions England begin their campaign against Netherlands on 22 February in Nagpur. But their game against India in Calcutta could be affected by the uncertainty over Eden Gardens.

India's reputation was badly damaged by the last minute rush to be ready for the Commonwealth Games in October.

The fall out is still being felt with an Indian Central Bureau of Investigation into senior figures from the organising committee, including the chairman Suresh Kalmadi, who has been asked to explain a series of financial irregularities.

India might be one of the coming global powers and the financial driving force behind world cricket.

But, despite reassuring the ICC everything will be finished on time, by leaving it so late for the cricket World Cup they are risking more international humiliation.