Doha
The Fifa president Sepp Blatter was in relaxed mood as he gave a briefing to journalists in his hotel suite.

In Qatar for the start of the Asian Cup - a dress rehearsal for the bigger event in 11 years time - Blatter was in fact so relaxed that he gave the most definitive statement yet on the timing of the World Cup in 2022, saying he expected it to be in winter and not summer.

Ever since Qatar shocked the football world by winning the vote last month, there has been a drip, drip, drip of speculation that the tournament would be moved from its traditional summer slot.

It might be a long way off but those two former footballing greats Michel Platini and Franz Beckenbauer were the first members of Fifa's executive committee to raise the possibility, suggesting the punishing 50 degree heat in the summer might make it dangerous for the players. 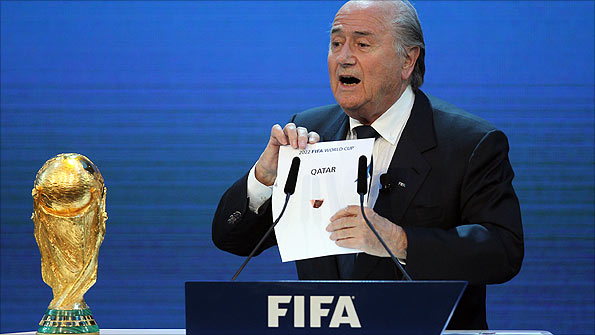 Blatter backed that up a couple of weeks after the Zurich vote when he suggested it might be preferable to move the timing of the World Cup, a view shared by his general secretary Jerome Valcke.

But in saying he "expects" it to be changed is the clearest indication yet that the process of moving the 2022 World Cup is well and truly under way.

Just to be clear, here's exactly what Blatter told reporters:

Asked whether he expected the World Cup to be played in winter, he replied, "Yes", before adding later:

"I expect it (to be in winter) because when you play football you have to protect the actors."

Now, many people around the world, particularly in those countries most aggrieved at losing the contest for 2022 (Australia and America) will look at Blatter's remarks and ask, quite justifiably, how can this be fair?

Every nation bidding for 2018 and 2022 put in campaigns based on summer World Cups. Qatar itself went to great lengths to convince executive committee members that its plan for air conditioned stadiums would eliminate the problem of the heat in June and July.

To just change the rules after the vote will only lead to renewed criticism of Fifa and its process for choosing World Cup hosts. No question, it will leave a nasty taste in those countries which missed out.

But there is nothing in Fifa's rules to prevent a host changing the time of year when a World Cup is played. It is only tradition which has dictated this.

And the Fifa executive commitee actually has the power to change any aspect of the World Cup after the decision is made.

Fifa will also make the point that if it wants to take the game to new territories and to develop football as a truly global sport then other parts of the world may have to make compromises.

However, while Blatter may expect it to be in winter, it's not quite as simple as him issuing a Presidential dictat. Qatar must make an official request to Fifa's executive commitee which must then vote on making the switch.

Qatar has not yet formed an organising committee. So far the country has said nothing about the prospect of a winter World Cup. The successful bid team have a meeting with Fifa officials at the end of the month which could lead to a request being made but it is very early days.

FIfa then has an execuitive committee meeting in Zurich in March where it is likely to be discussed although both Blatter and the Fifa general secretary Jerome Valcke made it clear there were curently no plans to formally address it.

But there can be no doubt that Blatter's comments show that it is now only a matter of time before the change is made.

As a couple of brief postscripts Blatter was also interesting on the reasons for England's humiliation in last month's 2018 vote in Zurich. He suggested there could be resentment inside Fifa at the "privileges" British football enjoys.

That's a clear reference to the automatic right the four home nations have on the Fifa executive committee to a vice presidency, a right which British football has enjoyed since 1946.

It's also a reference to the 50% share of the voting rights the four home nations enjoy on the International Football Association Board, the game's law making body.

Blatter said these privileges needed to be handled intelligently, the implication being England 2018 perhaps hadn't always done that. They were polite, they did a good presentation and so on, he said. But there was clearly "reticence" and "resentment", he added, inside Fifa at Britain's privileges.

Even more interesting was Blatter's upbeat mood after the shock removal on Thursday of one of his long term rivals for the presidency of Fifa, the Korean Chung Mong Joon.

Dr Chung was voted off the Fifa executive committee and lost his vice presidency after 16 years as the Asian Football Confederation congress voted to elect Prince Ali Bin Al Hussein, the son of the late King of Jordan.

At the age of 35, Prince Ali becomes the youngest member of the Fifa executive committee but at the same time will ensure there is little chance of change at the very top of the organisation.

Removing Dr Chung takes out one of Blatter's long term opponents and makes it virtually impossible for him to stand against him in May's presidential elections, where the Swiss is bidding for a fourth term.

Significantly the man who helped co-ordinate Prince Ali's successful campaign, Sheikh Ahmad Al Fahad Al Sabah, head of the Kuwait Football Federation and the Olympic Council of Asia, said that the 25 Asian nations which backed him in his election against Chung (who polled just 20 votes) will also back Blatter.

That means that another of his presidential rivals, the Qatari vice president Mohamed bin Hammam, will not be able to count on the full support of Asian football if he were to launch a bid.

Blatter would not get drawn directly on questions about his position being strengthened but asked us to draw our own conclusions.

And the only conclusion one can draw is that Blatter is almost certain to be re-elected for another four years in May.