With a series of big names distancing themselves from the post and the favourite, David Dein, still weighing up whether to apply, the search for a new Football Association chairman is not becoming any clearer.

Sir Keith Mills, Martin Broughton, Lord Mervyn Davies and Sir Terry Leahy have all declined advances to talk to the FA about the position, which has been vacant since Lord David Triesman resigned in May.

Dein, who until two weeks ago was the international president of England's failed World Cup 2018 bid, has become the favoured candidate in a narrowing field.

But despite spending the last week taking soundings from senior figures in football and government - including a breakfast meeting with Culture Secretary Jeremy Hunt on Tuesday - he still has reservations about taking the job on.

One of the reasons for that could be the FA's decision not to give the new chairman - at this stage - the ultimate say over how the England team is run.

That is currently the responsibility of the Premier League and Club England chairman Sir David Richards and although the FA is prepared to change the set-up depending on who it appoints, it is extraordinary that they would even consider trying to recruit a big-hitting chairman without making it clear from the outset that they will be able to control the most important and high-profile role the organisation performs.

This is all the more surprising when one considers the biggest job in the first 12-18 months of the chairman's tenure will be to appoint a replacement for the outgoing manager, Fabio Capello.

To be fair to Richards, he has told the FA's professional game board in recent weeks he is prepared to stand down from his role as Club England chairman. And an FA spokesman insisted today the new manager would be signed off by the main board, overseen by the new chairman. 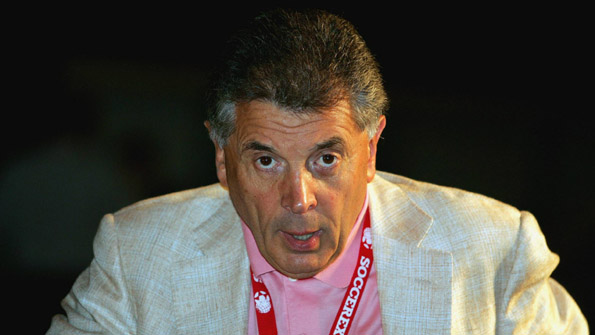 Dein is a leading contender to be the new chairman of the FA. Photo: Getty Images

But interestingly ministers are already expressing concerns over the potential conflict of interest between Richards's dual role as Premier League and Club England chairman.

And the Premier League will also come under pressure in the next few months to replace Richards with a new independent chairman. This is likely to be a key feature of the parliamentary select committee inquiry into football governance and any subsequent government review.

But the lack of clarity on the England issue is unlikely to be the only reason for Dein's hesitancy.

The former Arsenal vice chairman's age is also considered an issue. He is 67, meaning he would have less than three years before he would have to stand down under the FA's age limit for board members of 70.

One other candidate sounded out about the post is the former Premier League and Liverpool chief executive Rick Parry.

Parry, who left Liverpool after falling out with former co-owner Tom Hicks, was approached but is not thought to be on the final shortlist - drawn up by a meeting of the special nominations committee headed by Bolton chairman Phil Gartside on Monday.

The FA remains determined to press on with plans to put two or three names to the board meeting next Wednesday.

The World Cup 2018 vote humiliation is not directly related to the FA's governance problems but it has provided the catalyst for another period of introspection. A parliamentary select committee will look into the way the game is run in the new year with the government ready to set up its own review.

But despite all this the FA feels it can't afford to wait.

It has been without a full-time chairman for more than seven months.

Plus the decision must be approved by the FA council which next meets in January. Miss next week's meeting of the FA board and that won't be possible until March, delaying the process even further.

It may well be that the FA has lined up the sort of candidate with the football and business pedigree required, but get it wrong and it could increase the pressure on a body already facing a period of intense scrutiny.