The atmosphere was one of anger but also despair and bewilderment.

As the England 2018 chief executive Andy Anson gave the dreaded morning after the night before media conference at the Steigenberger Hotel it was clear he still couldn't quite believe what had happened at Thursday's Fifa World Cup vote.

To lose was one thing. But to be eliminated with only two votes was quite another - especially when one of those votes came from Englishman Geoff Thompson.

At least five executive committee members had said they would vote for England in the first round, many of them looking Prince William or Prime Minister David Cameron in the eye and telling them they were on board.

England 2018 believe four members of the executive committee would vote for them in the first round - especially after holding talks with Prince William or David Cameron.

The bid team believe them to be: Jack Warner of Trinidad and Tobago, Korea's Chung Jong Moon, Marios Lefkaritis of Cyprus and Ivory Coast's Jacques Anouma.

A fifth, Chuck Blazer of the United States , is understood to have had his vote promised to England by Warner.

Anson refused to use the word betrayal, but it was written all over his face as he said there was no point in bidding again unless the process was changed.

"When you have the best technical bid, fantastic inspection visits, the best economic report, and, from what people told us, the best presentation, it's quite hard to stomach that all that seemed to count for absolutely nothing," said the England 2018 chief.

Anson also said he had been told that Fifa president Sepp Blatter had spoken to executive committee members of the "evil of the media" just before the vote.

"I think that was unhelpful - the last thing those guys hear before they go and tick the box is the evil of the media," added Anson. "That is not helpful and actually inaccurate.

"I was told by someone who was in the room that that's the last thing they were told by Blatter. There was a final sum up before they voted and I think it was at the beginning of that. That's not helpful to our cause." 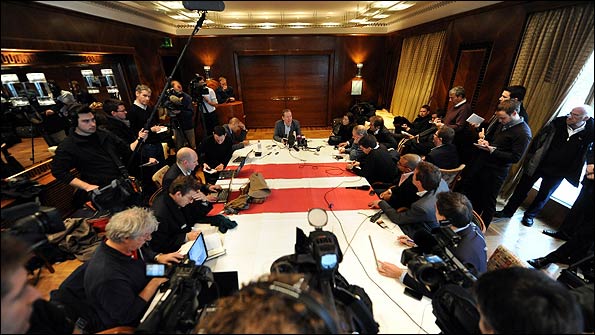 With so much anger already aimed at the British media over the Sunday Times allegations which resulted in two members being banned and Monday's BBC Panorama programme, this was a devastating blow.

It reflected once again Blatter's power. Many were writing the Fifa chief off before this vote, suggesting his power was on the wane.

But he has shown that by securing the 2018 vote for Russia he is still very much in the ascendancy although Qatar's 2022 victory suggests Blatter cut a deal with his would be successor Mohamed Bin Hammam, the president of the Asian Football Confederation.

If Blatter's intention had been to remind the executive committee members of his wish to deliver on his promise to Russia then it worked.

I spoke briefly to Japanese executive committee member Junji Ogura, who confirmed that the media played its part - although he added it hadn't affected him.

Ogura had done a deal with Holland and Belgium and despite rating England's bid highly had to vote for the Low Countries' bid to give his Japanese bid for 2022 a chance of victory. He was one of the few to admit that to Thompson and is seen as an honourable man by England's bid team.

Confederation of African Football president Issa Hayatou, one of the three men named in the Panorama programme on Monday, also voted for England.

Once the recriminations die down the focus will switch to longer lasting change.

Fifa will now be urged to widen the vote and make it transparent.

There will also be questions over why the technical aspects of each bid seemed to be disregarded by members.

England 2018 deputy chairman Brian Mawhinney said there was a rumour that just three of the 22 voters read the bid books.

Fifa's desire to take football to new territories must be seen as laudable but the process by which these decisions are made is likely to come under enormous scrutiny - especially by those vanquished countries.

Whatever changes come in will be of little comfort to England, with 2030 the next chance for them to host the tournament.