The mystery surrounding Pakistan wicketkeeper Zulqarnain Haider's decision to flee his team's base in Dubai on Monday poses more questions than answers.

Why did he come to London without telling team officials? Why was Heathrow Airport his chosen destination? And what happened to him after he landed in the United Kingdom?

Was he running scared from a bookmaker who threatened him after he hit the winning runs in Friday's one-day international against South Africa?

Or was it no more than a flounce, a reaction to being fined for breaking a team curfew?

At this stage, all we have to go on is Haider's cryptic Facebook message and a quote from his brother Raza, who suggested, after talking to his sibling on the telephone, that he was "upset", as if he had "some sort of pressure on him".

What we do know is that the International Cricket Council (ICC) is deeply concerned over the wicketkeeper's safety and wants to speak to him urgently. 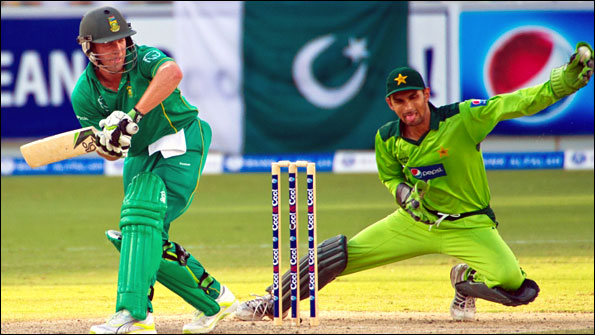 Haider is staying in the UK on a one-month visa. Photo: AP

Just as worryingly, whatever made Haider flee Dubai was serious enough to warrant his family in Lahore being placed under police protection.

After a year of damaging scandals involving Pakistan cricket, this latest episode is likely to raise more doubts over the game's integrity.

The hope for the ICC and its anti-corruption unit is that, if Haider has received threats from shady figures in Dubai acting for illegal gambling syndicates, he could be key to opening up a corruption conspiracy long suspected but proving near impossible to stand up.

It is surely no coincidence Dubai is the setting for the latest scene in Pakistan's psychodrama. During a trip to India in October, I spoke to people with connections to bookmakers, with many claiming Dubai was the nerve centre for an industry worth billions of pounds.

The three Pakistan players at the centre of the recent spot-fixing allegations - Mohammed Asif, Mohammed Amir and Salman Butt - are still waiting to find out if they will face police charges in Britain after a newspaper claimed they arranged to bowl deliberate no balls during the Lord's Test match in August.

A second file was sent from the Metropolitan Police to the Crown Prosecution Service on Friday but it is believed there is unlikely to be any movement on the case before Christmas. It is thought police inquiries are being held up by a separate customs investigation focused on the fixer at the centre of the affair, Mazhar Majeed.

The ICC is unable to act until it is clear what is happening with those investigations. In the meantime, the three players remain suspended. And until the ICC is able to act, it is impossible to know how deep the problem in Pakistan cricket goes.

Haider may provide a breakthrough for investigators but for now there is just deep concern for his safety.

Zulqarnain Haider is set to become international cricket's first refugee after claiming asylum in the UK.

The Pakistan wicketkeeper has told Pakistan's Geo television network: "I understand there is rule in Britain that if you are on right and if you are not a criminal then they always protect you."

It is understood Haider presented himself to the UK Border Agency at Heathrow Airport on Monday afternoon.

In so doing Haider has, for now at least, eased concerns for his safety after he fled Dubai saying he had received threats following Pakistan's victory in a one-day match against South Africa on Friday.

His family remain under police guard in Lahore but in claiming asylum Haider has at least guaranteed himself a measure of security.

He now faces a a process that could take up to six months before it is clear whether he will be granted refugee status. The UK Border Agency must assess whether his claims are credible.

Police and anti-corruption officials will now be desperate to interview Haider about why he went on the run. It is clear from a message posted on his twitter account on 24 October that he was already trying to help the ICC's anti-corruption unit.

They will hope that Haider's evidence can help provide a real insight into the suspected connections between illegal gambling syndicates and the Pakistan dressing room.