After 24 hours of confusion the BBC now understands that the Pakistan wicketkeeper Zulqarnain Haider has claimed asylum in the UK.

He now has the right to stay here while his application is processed - something which could take up to six months.

It also became clear on Wednesday morning that investigators from the International Cricket Council's anti-corruption unit have interviewed Haider following his arrival in London on Monday.

My understanding is that the ICC investigators spoke to him at his hotel near Heathrow Airport late on Tuesday night.

Although it is not thought to be related, the meeting came just hours after the ICC's chief executive Haroon Lorgat, speaking at the governing body's headquarters in Dubai, appealed to the player to come forward with any information he might have relating to possible match-fixing.

So, having gone from sought-after whistleblower to unreliable witness in the space of a day, it now seems Haider is being treated seriously again.

Having spent Tuesday at the hotel where Haider is holed up, it was, at times, extremely hard to take the situation seriously.

At one stage police officers appeared to stage the player's exit from the hotel with a carefully choreographed manoeuvre involving three police vehicles, climaxing with a seemingly empty police van speeding past camera crews. Was he in there? Wasn't he? Who knows.

A spokesman in the Metropolitan Police press office denied any officers were at the hotel interviewing Haider even though I approached two plain clothes officers who confirmed they were from the Met but, to be fair, would not confirm who they were there to interview.

The press officer said the only reason any police were at the hotel at all was because management were worried about the press pack which had gathered in the lobby. That was despite the fact that officers had already arrived when just three or four colleagues from the BBC were there in the morning, well in advance of the rest of the media.

Even more intriguingly I spoke to Haider twice earlier in the day. We arranged to do an interview and on both occasions he seemed fairly relaxed. He had already spoken with Pakistan network Geo TV and seemed to be prepared to talk again to the BBC.

By mid-morning, however, something had changed and he went to ground. 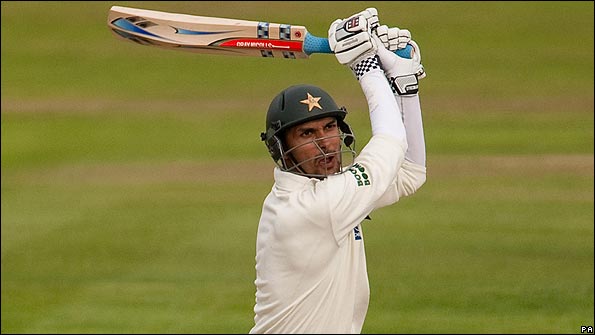 Trying to draw any conclusions from his flight to London and his subsequent contradictory comments is extremely hard.

But cynics might ask if he was really worried for his safety and that of his family, why would he give any interviews to the media?

Why would he check into a hotel near Heathrow airport under his own name? It took just one call by a BBC journalist to identify which hotel he was staying at - although within a few minutes of putting calls through to his room, the hotel's staff ludicrously claimed he wasn't staying there after all.

And why, if he was really anxious to talk to the ICC anti-corruption unit - and he has spoken favourably about the work they are doing on his Facebook page in the last few weeks - didn't he simply go and see them at their HQ in Dubai, right next door to where he was playing for Pakistan?

None of this adds up - and maybe it shouldn't when we are dealing with a man who is acting irrationally amid concerns for his life.

But as the Pakistan Cricket Board's Nadeen Sarwar pointed out on Wednesday morning, every player is aware of the procedure in the event that they receive an approach from a third party seeking to influence the outcome of cricket matches.

In another new development, the PCB has now suspended the runaway wicketkeeper's contract for violating its terms and conditions.

A statement added that the PCB was still trying to get in touch with Haider but attempts to contact him have so far been unsuccessful.

If Haider genuinely believes other members of the team and or officials are corrupt then his reluctance to talk to them is understandable.

And we must remember that any evidence he may offer which will shed further light on what's been going on inside the Pakistan dressing-room will be welcome for a game fearful for its own reputation.

But at the moment we are all still in the dark.