The meeting is a clear sign that Cameron means business and will be followed by a series of key meetings with other members of the Fifa executive committee, which will decide on Thursday who hosts the 2018 World Cup.

At the same time, Prince William and David Beckham are also due to arrive in the Swiss city to lend their support to a campaign that believes it has been hurt by BBC Panorama revelations on four of the executives.

On Tuesday morning, the BBC's executive editor for current affairs, Clive Edwards, responded to claims from the England 2018 camp that the broadcaster should be "embarrassed" by the programme by revealing that the BBC had presented its evidence of a secret list of bribes paid to Fifa officials on 10 November. 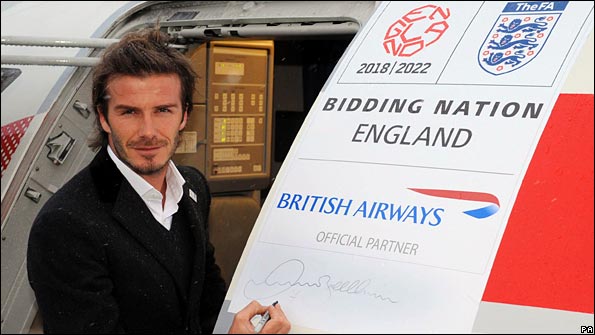 Beckham prepares to board a plane for Zurich. Photo: PA

Edwards said Fifa failed to take any action and repeated the BBC's position that, despite the last-minute scheduling of the programme, it was in the public interest.

But one cannot overplay the level of frustration felt by members of England's bid team, who believe they have been let down by the corporation at exactly the moment it should have been getting fully behind them.

One senior member of the England camp grabbed me by the arm on Monday night in the lobby of the Baur au Lac hotel, where much of the frenzied lobbying and deal making is going on, and said: "The BBC should hang its head in shame at what it's done."

On one level, it is easy to understand all this frustration. The England 2018 team believe they have the best bid, that the country deserves its chance to host the World Cup for the first time since 1966 and that the people are fully behind it.

But what cannot be escaped is the fact that the process for deciding which country hosts a World Cup is not a transparent and open process. And, as Panorama's programme demonstrated, the people making such an important decision, worth billions and billions of pounds, have serious questions to answer over their probity and suitability to do so.

Should we all just look the other way when evidence is presented which suggests £66m worth of bribes were paid out to sports officials, including three current members of the Fifa executive committee?

The International Olympic Committee does not think so. On Tuesday, it announced its ethics commission would be looking into the claims against Issa Hayatou, the head of African football, who is also a member of the IOC.

Fifa, meanwhile, has issued a statement saying Panorama's revelations "date back many years ago and were investigated by the relevant authorities in Switzerland". It added that "the investigation and the case are definitely closed".

Against this backdrop, Cameron, Beckham and Prince William will attempt to turn on the charm and deflect attention from Panorama on to the stadiums and money-making potential an England bid offers.

On Tuesday, a Fifa report carried out by consultants McKinsey revealed England scored 100% and came top with the United States in an analysis of the economic benefits each of the 2018 and 2022 bidders offer as potential hosts.

So, as the 'three lions' of England's bid, as chief executive Andy Anson called them on Monday, begin their networking, what are the key questions that the campaign must answer in the next two days?

First, they need to know what Jack Warner is going to do. Warner controls at least two of the three votes from Concacaf (the north, central and Caribbean football confederation). He is crucial to England's chances of getting the five or six votes they need to get through the first round. Without him, England cannot build momentum. If Warner reacts badly to Panorama's ticket-touting claims, then England are in real trouble.

Secondly, they need to gauge the reaction from Hayatou, whom they hoped would vote for England. Having already been bruised by the fallout from the Sunday Times investigation, he is unlikely now to be well disposed to England.

Finally, England's team need to know how many executive committee members will actually vote. At the moment, Reynald Temarii, the member for Tahiti who was banned for a year in connection with the Sunday Times expose, cannot take part in the decision.

But he is considering dropping his appeal, allowing him to be replaced immediately by another member from the Oceania confederation, David Chung, who, it is believed, would back England. There is still a lack of clarity on this from Fifa.

Despite all these questions and England's insistence it can win, it is clear Cameron, Beckham and Prince William still have their work cut out.