How did it get this bad for Liverpool?

Whatever judgment Mr Justice Floyd delivers this morning, Liverpool's day in the High Court yesterday exposed in painstaking detail the complete breakdown in trust between the club's owners, their bankers and the men brought in to try to rescue the sorry mess.

After almost five hours of submissions by a series of lawyers whose weekly wage packets might make Fernando Torres blush, many questions were left unanswered.

But as barrister after barrister took it in turns to debate the finer points of corporate governance side letters, mandatory interlocutory injunctions and holdings company board sub-committees, there was one question above all others which kept nagging away at the back of the mind. How was it allowed to get so bad?

This particular case concerns the specific point of whether Tom Hicks and George Gillett, Liverpool's deeply unpopular American owners, breached the terms of a loan extension with the Royal Bank of Scotland in April when they blocked the sale of the club for £300m to Boston Red Sox owner John W Henry last week.

Amazingly, in a witness statement submitted to the court, Hicks admits they did breach the RBS agreement when they sacked Liverpool directors Ian Ayre and Christian Purslow. So that's an open and shut case, right? 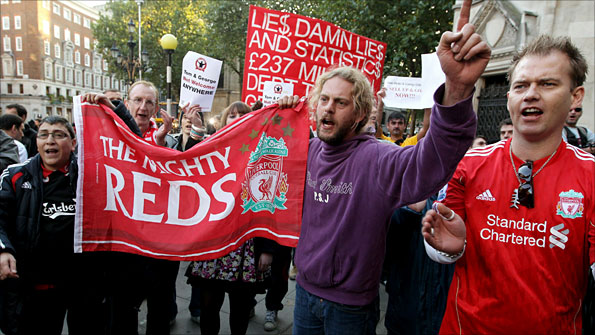 The fight for Liverpool's future will be decided in the courts. Picture: Getty Images

If only. What Hicks and Gillett's lawyer Paul Girolami instead attempted to argue was that Hicks and Gillett only did this because Liverpool chairman Martin Broughton and RBS had already breached that agreement by keeping them in the dark during the sale process.

The owners say Broughton and the board should have given more serious consideration to alternative bids for the club and that they only found about Red Sox owners New England Sports Ventures (NESV) when negotiations were well advanced.

In his remarkable statement, seen by the BBC, Hicks even goes so far as to claim the so-called English directors on Liverpool's club and holdings company boards (Broughton, Purslow and Ayre) had their own secretive "home team" phone line for key takeover discussions - a phone line Hicks and Gillett say they were not invited to use.

By being shut out, Hicks says he had no choice but to reconstitute the board - appointing Hicks Holdings colleague Lori McCutcheon and son Mack Hicks - even though he knew it would breach the terms of the RBS loan extension.

Hicks states: "It was necessary in order to ensure the matter was properly dealt with for us to reconstitute the board... In having done so we acknowledge that that was contrary to the corporate governance side letter."

Whatever Hicks and Gillett now say about their reasons for the breach, that is the apparent crux of the case. And the admission should render all the other interesting new details offered up yesterday as fascinating but ultimately irrelevant.

- The labyrinthine company structure created by Hicks and Gillett, consisting firstly of the club, Liverpool (LAFC). It was revealed that RBS is owed £97m by this company which breaks down as a £25m general facility, £52m for players and stadium investment and a £20m revolving facility. Above the club there is Kop Holdings Ltd which owes RBS the £200m main facility. Then there is Kop Football Holdings Ltd. This has security over the assets of Kop Holdings and LAFC. Above that is Kop Football Cayman Ltd and then Kop Football LLP, an American company registered in Delaware. It is this company Hicks and Gillett own 50/50.

- A threat from John Henry's NESV that if the sale to them does not go ahead they will seek damages from Hicks and Gillett worth "tens of millions of pounds". It also emerged that while the deadline for repayment of RBS's loan is this Friday, 15 October, there is a long stop date of 1 November for the deal to be finalised.

- The emergence of a new increased offer from Peter Lim valuing the club at £320m with £40m for new players.

- Claims from Hicks that Mill Financial - a US hedge fund - was prepared to pay somewhere between £375m and £400m to buy the club but was shut out of negotiations.

Now, both offers may well be real alternatives - but that is not really the point. The issue is whether Martin Broughton has the right to sell the club or not. If he has - and this will in essence be addressed by today's RBS ruling - then he has done a binding deal with NESV.

For those Liverpool fans who wore their colours to court, yesterday may have offered more entertainment than their team has of late. At one stage it hardly seemed a fair contest as Girolami, for Hicks and Gillett, found himself seriously outnumbered by lawyers for RBS, Broughton, Liverpool and NESV.

But he gave as good as he got, even if his more outlandish claims caused his rivals to shake their heads in disbelief.

In the end it was Lord Grabiner QC, one of the most eminent barristers on the commercial circuit, who stole the show with his mispronounciation of Gillett's name (Jillett) - a mistake he dismissively corrected later on - and his withering reference to Tom Hicks Jr as "Hicks minor".

These drew laughs from an audience in need of some light relief but he also delivered some killer lines, including the accusation that Hicks's delaying tactics were "slippery behaviour to say the very least".

It was left to Richard Snowden QC, for RBS, to remind us why we were all utlimately in court. RBS, a bank partly owned by us, remember, is owed a lot of money and would like it back - preferably by this Friday.

If Mr Justice Floyd rules in favour of RBS this morning, that would not only bring them (and us) closer to being reunited with that money it would also effectively provide the so-called declaratory judgment Broughton needs to complete the sale to NESV.

That will give Liverpool supporters hope that an end to this tortuous battle for control of Liverpool is in sight.

But if they lose on Wednesday, Hicks and Gillett are almost certain to appeal. And as anyone who has followed this story closely knows - a simple, clean ending was never likely.

Mr Justice Floyd's judgment is as emphatic as Broughton and the club's bankers Royal Bank of Scotland could have hoped for.

On the application from RBS to reconstitute the board after Hicks and Gillett had changed it last week in an effort to block the sale to New England Sports Ventures, the judge ruled there was no arguable case.

And on a separate application from Hicks and Gillett that they only breached the agreement with RBS because the bank, Broughton and the so-called English directors had already breached it by shutting them out of sales negotiations, the judge was equally dismissive.

In summary, this means Hicks and Gillett breached the terms of the £237m loan with RBS by changing the composition of the board and the bank is therefore entitled to order the board to be reconstituted. Or put more simply, Purslow and Ayre are back on the board.

Mr Justice Floyd went on to say that it was now up to Broughton, the directors of the club and their holding companies to decide whether the sale to NESV went ahead, although he gave Hicks and Gillett until 2000 BST on Wednesday to participate in any board meeting to decide the next step in the sale.

Broughton and his lawyers will now try to persuade Hicks and Gillett to particpate in a telephone conference to determine whether the original £300m deal with NESV still holds.

NESV claim they have a binding agreement that runs until 1 November but advisers for a rival bid from Singapore businessman Peter Lim, which was increased to £320m, plus 40m for players, on Tuesday, will argue their offer should be reconsidered by the board.

Hicks and Gillett were told by Mr Justice Floyd that he did not feel it appropriate to grant them an appeal but it remains likely they will go to the Court of Appeal on Wednesday.

There is also the issue of a possible trial next Thursday. The judge made it clear that his rulings were not the declaratory judgment Broughton is seeking on the validity of the deal with NESV.

Clearly there will be no need for a trial if Hicks and Gillett, who claim they now accept the club must be sold, agree a deal at Wednesday's board meeting. And Lord Grabiner, QC for Liverpool's holding companies, told me he did not expect there to be one.

Perhaps the most telling part of Mr Justice Floyd's judgment came when he spoke of the substantial damage he would have caused to the football club had he ruled in favour of Hicks and Gillett. Amazingly, this was only the second time during almost six hours of High Court proceedings that the club at the centre of this dispute was mentioned.

"If I granted an injunction the damage to the club... would be substantial," said Mr Justice Floyd. "The damage would be enormously difficult to quantify. How does one quantify the effect on the fortunes of the club or the underlying value of the asset."

These remarks help to explain why a large crowd of Liverpool fans gathered outside the High Court to greet a jubilant Broughton and Purslow as they emerged. They shook the two men by the hand and chanted anti-Hicks and Gillett songs as Broughton declared that justice had been done.

Broughton and members of his team then attempted to escape the scrum by running off down the Strand to start the next phase of this extraordinary story - to complete a deal together with NESV that could put the club back on track.