Hicks will not go quietly

It seems there is another dramatic twist in the extraordinary battle to buy Liverpool.

With club chairman Martin Broughton and the independent board of directors expecting a Dallas judge to lift the restraining order blocking the sale of the club to New England Sports Ventures, it looked like they were winning the fight for control of the Reds.

But the real reason for the Texas court action - described by one lawyer in the High Court on Thursday as so fanciful it read like a novel - was to buy Liverpool co-owner Tom Hicks enough time to do a last gasp deal with Mill Financial.

Mill already owns 50% of the Premier League club after assuming control of George Gillett's stake in August. Now Hicks, who is close to Mill, is trying to sell the other half to the American hedge fund, paving the way for it to pay off the £237m owed by Hicks and Gillett to the Royal Bank of Scotland. That money is due to RBS by the end of Friday.

Should Hicks succeed, an already complicated story will become even more bewildering. 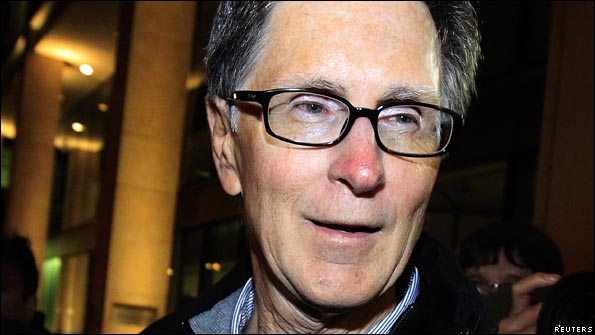 John W Henry is determined to win the battle for Liverpool. Photo: Reuters

NESV chief John W Henry has already tweeted he will fight what he described as the "last desperate attempt" by Hicks and Gillett to "continue their entrenched regime".

Henry still has a binding agreement with the Liverpool board to buy the club and will take legal action here in the United Kingdom if the deal with Mill Financial goes through.

There is one major stumbling block facing Hicks as he looks to retain his hold on Liverpool. Any prospective sale to Mill will have to be voted for by Broughton and English directors Christian Purslow and Ian Ayre. Given they outnumber the American co-owners, it seems difficult to see how Hicks can come out on top.

But it is impossible to predict what happens next with this story.

Update 1236 BST - There's one remarkable fact which is almost being overlooked in the latest developments in the Liverpool ownership saga.

George Gillett's half of Liverpool Football Club has - thanks to the levels of debt piled up - ended up in the hands of an American Hedge Fund (Mill Financial) of which very little is known about.

Did the Premier League know about it? Would it have passed their new 'fit and proper' person's test?

Also, it's worth noting that the only people who can repay the debt (more than £200m) to RBS are owners Tom Hicks and Gillett. Not a third party. It's like someone else paying off your mortgage for you.

So - in other words - for Hicks to get the money from Mill Financial - which is attempting to do - there needs to be a transfer of shares.

And the feeling from New England Sports Ventures (NESV), the Liverpool board and RBS is that any transfer of shares needs a vote of the UK board - as the asset here is ultimately controlled by the board which Martin Broughton chairs.

That board has already voted 3-2 in favour of a sale to NESV (owners of the Boston Red Sox). That would make a sale of Hicks' shares to Mill Financial highly unlikely.

But let's think about this another way, now the restraining order in the Texas court has been lifted, NESV technically can complete their deal but RBS still need to be paid off.

Again they can't be paid off by a third party - it needs to be Hicks and Gillett - so they would have to accept the money from NESV and John W Henry for it to work.

Whatever happens, and it's certainly complicated, this looks almost certainly to be heading for the courts again.