For the first time since 1986, the first day of a Test match at The Oval is not sold out.

With England already 2-0 up in the four-match series, there are 5,000 seats available for Wednesday and 2,000 for Thursday.

Many will say it is a local issue and blame a one-sided series at the end of a sporting summer dominated by football's World Cup.

They will also point to ticket prices, which, critics claim, are now too high. That is undoubtedly part of the problem and might explain why the second Test at Edgbaston was not a sell-out, even though half the ground was closed for redevelopment.

But prices are set high because the grounds which stage Test matches have to recoup the millions of pounds they now pay the England and Wales Cricket Board (ECB) for the privilege of staging Tests. 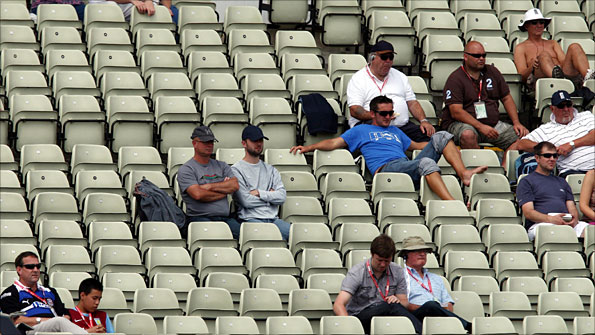 There were plenty of empty seats for the second Test at Edgbaston. Photo: Press Association

According to a report by Deloitte, commissoned by the nine grounds which stage international matches in England and Wales, the combined cost to those grounds of bidding and staging games will have risen from £5.4m in 2006 to £17.5m next year.

Having also invested £150m on improving facilities over the last decade, the income is too important for their survival to risk missing out. To prove the point, last year the Ashes and the West Indies matches generated almost £50m in revenue.

By giving more counties the chance to stage Test matches, the ECB has guaranteed more income for the whole of the sport in this country.

It has also led to more matches - and that risks devaluing the product. As Paul Sheldon, the chief executive of Surrey puts it, cricket is in danger of killing the goose which laid the golden egg.

But is the sight of empty seats at English Test grounds evidence of a far wider global problem for the game, as the old order struggles to contend with the forces of modernisation?

The rise of Twenty20 cricket and the growing financial influence of the Indian Premier League have demonstrated there is a huge appetite and growing market for the game - especially in the subcontinent.

But the new form of the game has not only enriched the world's best players, turning their priorities upside down in the process, it has exposed frailties at the heart of Test cricket.

The answer, according to former England captain Michael Vaughan, is to introduce a new two-tier league format for Test cricket, with the best five teams in the world playing each other and the rest battling it out in a second division.

That would help improve the competitiveness at the top and would help reintroduce sport's magic ingredient - uncertainty.

It would also go against the International Cricket Council's aim to raise the standard of the sport in all Test-playing countries.

After more than 130 years of history, Test cricket is unlikely to vanish any time soon.
And the prospect of another Ashes series down under this winter will soon turn this cluttered summer into a distant memory.

But the challenge for the most conservative of sports is to modernise while preserving its great sense of tradition.