Deflated after their listless performance against Algeria, England's players were given Saturday morning off to relax or take in the sights of Cape Town.

Outside the team's exclusive Vineyard Hotel, a group of camera crews and photographers waited to capture those players brave enough to venture out.

Others, like Wayne Rooney, remained holed up inside. After his frustrated outburst at the many England supporters inside the stadium who expressed their anger at England's display, the Manchester United striker was rather more camera shy the morning after.

England manager Fabio Capello was the first to leave after breakfast, taking a car just after 0900 local time. He has a lot to reflect on after seeing his meticulous plans for this World Cup go so wrong. 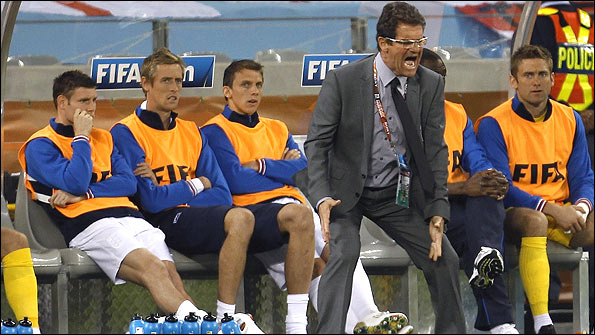 Capello was furious with his side's performance against Algeria. Photo: AFP

Having exuded such confidence during qualifying and such certainty in his own methods, the Italian - a winner of nine league titles in Italy and Spain - is giving off the air of a man in personal crisis in what is his first World Cup as a coach.

His body language as he came off the pitch at half-time last night spoke of utter befuddlement at how a group of players with such large reputations could be shrunk in the face of supposedly weaker African opposition.

His press conference display was hardly more encouraging as he spoke of his bemusement at his team's form and pointedly refused to rule out quitting if England are eliminated after Wednesday's game against Slovenia.

Although he cannot be blamed for the paucity of world-class players at his disposal (get ready for that debate next week if the results go against England), the pressure is on in a way that will be different and possibly more intense, than anything he experienced in La Liga or Serie A. He has never had to deal with such huge national expectation.

England return to their Rustenburg training camp later on Saturday. Sensing the anger of fans back home and here in South Africa there is a mood at the top of the Football Association to see Capello front up and face the media on Sunday. This would be unusual as the manager normally only speaks the day before matches.

The FA knows this is a key moment in its costly Capello project. There is a feeling at the top of the organisation that it has spared no expense in giving Capello and his players absolutely everything they asked for in terms of preparation and if they do go home early there will be serious questions asked about why a £5m-a-year manager and his vast coaching staff could not take England forward.

And given the disappointing way England have started this World Cup there will undoubtedly be a few jitters among FA board members at the last-minute decision to remove the two-year break clause in Capello's contract just before the team left for South Africa.

Some at the FA believe Capello would probably quit anyway if England did fail to get out of Group C. But there is no evidence from the manager's past that he would walk away lightly from such a lucrative deal.

But before we reach the end game in this now all too familiar drama, England can still qualify and even win the group if they produce a performance to match expectations on Wednesday.

And to end on a more optimistic note - this is exactly the same situation England found themselves in at Italia '90 when two 1-1 draws left Sir Bobby Robson's team needing a win against Egypt to go through. They did, and they reached the semi-finals. Robson only achieved that after changing his methods following talks with his key players.

The question is: can Capello change before it is too late?