Capello set to stay in charge

Despite England's humiliating World Cup exit at the hands of Germany on Sunday, it now looks increasingly likely that Fabio Capello will be given the chance to rebuild the team and restore his own tarnished reputation.

Asking him to wait two weeks while the Football Association weighed up whether it wanted to keep him was hardly the vote of confidence he was looking for in the immediate aftermath of the defeat in Bloemfontein.

But it is understood Capello is desperate to stay and make good the damage done to English football in South Africa. He wants the chance to prove he is the manager the FA told us it had hired.

So what will the FA do?

The early signals coming from the decision makers on the FA board suggest that they will ultimately decide to back Capello.

Phil Gartside, the Bolton chairman, became the first director to break cover. telling my colleague Dan Roan that he wanted Capello to stay and blaming the media for trying to force him out. 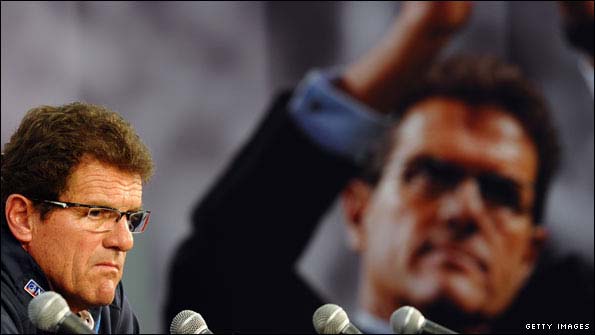 Gartside is a close ally of Sir David Richards, who wears many powerful hats in football including FA vice-chairman and chairman of the Premier League. His latest incarnation as chairman of the new Club England operation and the lack of an FA chairman following the departure in May of Lord David Triesman means Richards is effectively Capello's boss.

He has now been charged with the task of canvassing opinions before making a recommendation to a meeting of the board on 15 July. The board will then ultimately decide what to do.

But Richards, who returned home with the team on Tuesday, is also understood to have reached the conclusion that Capello should stay.

Those board members less convinced are likely to wait until they have had a full briefing on what went wrong in South Africa before deciding which way to jump.

And even if their instinct is to sack Capello and find a new manager to rebuild the England team, there are plenty of reasons not to.

The first is the cost. On the day England flew to South Africa, the FA removed a two-week break clause in Capello's four-year contract which would have allowed officials to remove the Italian cheaply if things went wrong.

Yes, Inter Milan were sniffing around but the FA should have stood firm and called Capello's bluff.

Taking out the break clause has left the FA liable to pay £10m for the remaining two years on his contract plus at least another £2m if it wants to sack Capello, his assistant manager Franco Baldini and the rest of his Italian backroom staff.

Some board members have told me they are unhappy about the way the contract was renegotiated without the full board's approval. According to an FA spokesman, the removal of the break clause was handled by Richards and signed off by the acting chairman Roger Burden, who stepped up following Lord Triesman's sudden departure.

One said that he still has not seen any paperwork or details relating to the break clause being removed. Alarmingly, he added that he was not even aware there was a break clause until he read in the newspapers that it had been taken out.

The Club England set-up is also a source of tension, with some inside the FA concerned that Richards and the professional game board now has too much power over the fate of the England team.

One source claimed there was a misapprehension about Club England, saying it was not a separate company to the FA with its own board and was no more than a new name for the FA's international committee. The source added that big decisions, like hiring and firing the England manager, remain the preserve of the board.

But the fact is these are relatively small considerations now and, far more importantly, the FA is not sure it can afford to sack Capello even if it wanted to.

The financial burden of Wembley, which incurs £20m of interest repayments on loans taken out to pay for the £798m stadium, puts serious pressure on the FA's accounts even though the most recent available showed it had turnover of £206m in 2008. 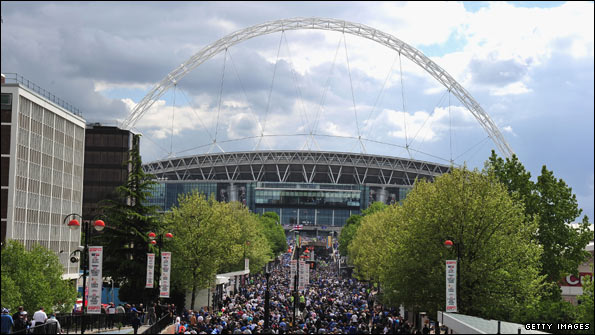 That income could be set to fall significantly when the FA's television rights deal with ITV runs out in two years. ITV paid £275m for the rights in 2007 but has already written the value of the contract down by £50m. ESPN also had to step in when the secondary deal with bust broadcaster Setanta collapsed.

The FA's main sponsorship deal with Nationwide, worth £20m over four years, has not been renewed. Although the building society wants to remain involved, the FA is holding out for more money.

Filling Wembley, which lost £23m in 2008, and selling sponsorship deals and TV rights will not be made any easier following England's dismal showing here.

Blowing £10m-£12m on paying off Capello before the cost of finding a new manager is taken into account does not make good business sense.

The second reason why Capello may be saved is that the early reaction back home suggests he is not shouldering the full responsibility. He made mistakes - and he admits that - but the players and the English football system are seen as far more culpable at this stage in the inquest.

Capello has had some harsh press over the last two days but he is not yet at the point of national ridicule reached by Sven-Goran Eriksson and Steve McClaren, who became caricatured as the money-grabbing Swedish lothario and the wally with the brolly.

There remains a level of respect inside the FA for Capello's achievements prior to the England job. He hasn't become a bad manager overnight, observed one board member. The gloss has come off, no doubt, but there remains hope that it can be restored.

The third and final reason for keeping Capello is that there is no real alternative. Roy Hodgson - the one genuine English candidate - is seemingly on his way to Liverpool. And despite his achievements at Fulham and elsewhere, does he really stand comparison with Capello?

Sacking a manager is a two-stage process and images of Brian Barwick's pursuit of Luiz Felipe Scolari are still fresh in the memory. The thought of another drawn out recruitment process stretching long into the summer will fill the FA with dread.

It is hardly the sort of reason he will want to hear - "Sorry Mr Capello, but Jose Mourinho was busy, would you mind carrying on?" - but it is the reality of the situation.

And as long as Capello is genuinely happy about that - and the message from his camp is that he seems to be - then it looks like he will be given the chance to finish the job the nation thought he had started.