Although England were comprehensively beaten 4-1 by Germany in Bloemfontein, that will not stop the raging sense of injustice over the 'goal' that never was.

Who knows how the game may have ended if England had gone in level at half-time? Germany always looked capable of scoring against England's creaking defence but the momentum would have undoubtedly been with Fabio Capello's team.

Watching from the stands, Fifa president Sepp Blatter will have no doubt been reflecting on the decision taken by football's rulers in March to put plans for goal-line technology on hold.

Blatter has always opposed the introduction of technology, saying refereeing mistakes are part of the game and made by humans.

But surely football can no longer withstand the pressure to act following mistakes like the one made here by Uruguayan referee Jorge Larrionda and his assistant.

Replays showed the ball was at least two feet over the line before German goalkeeper Manuel Neuer retrieved it. It was a shocking decision. 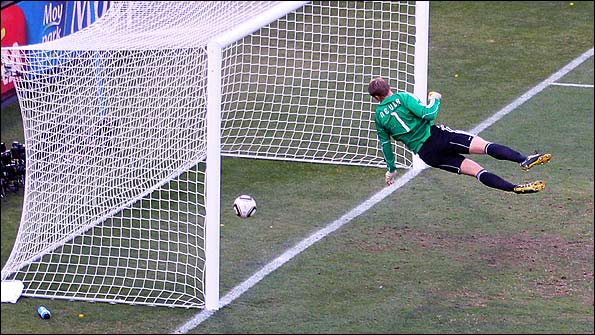 The incident will increase pressure on Fifa to introduce goal-line technology - photo: Getty

Over the next few days the debate will rage about why football has failed to follow the example of other sports like cricket and rugby where, in most cases, the authority of the referee and the umpire has been strengthened by the use of video replays.

But ultimately, Capello and England's players will know that the controversy will only mask the alarming way they capitulated against a vibrant, exciting German team. Boys against men, said Germany coach Joachim Loew before this game. But Germany's kids taught their elders a very sobering lesson here. Golden generation? Olden more like.

Having turned the corner with the win over Slovenia, Capello and England went into this last-16 match with renewed confidence. The heat was supposed to be off.

But the manner of England's defeat - their heaviest in World Cup history - means ultimately they have gone backwards under Capello.

Had they produced a fighting display then the judgment on the Italian may not have been so harsh. But now the inquest will be long and severe and he must be called to account for the way England performed during the tournament.

When Capello was negotiating his £5m-a-year contract he asked only to be paid a bonus if England reached the final. Former Football Association chief executive Brian Barwick, the man who hired him, set him the target of reaching the semi-finals at least.

For a serial winner like Capello, being eliminated at the second-round stage in such emphatic fashion will feel like a humiliating failure.

But ultimately it will be the players who should be held responsible for the disappointing way they performed in South Africa. One win over Slovenia and just three goals makes such confident predictions before the tournament now seem very foolish.