Will 2012 mascots be lucky for London?

For something which is ultimately just a bit of fun, organisers of the London 2012 Games are taking the launch of their mascots for the Olympics and Paralympics incredibly seriously.

Most people will not judge the events on the quality of the fluffy toys you can buy in one of the many Olympic merchandising stores between now and 27 July, 2012. What will be far more important will be how many medals Team GB wins, the overall London experience during the Games, the stadiums and ticket prices.

However, the mascot has become significant for London for a number of reasons.

The first is the opportunity it presents to lay to rest the fiasco of the logo. 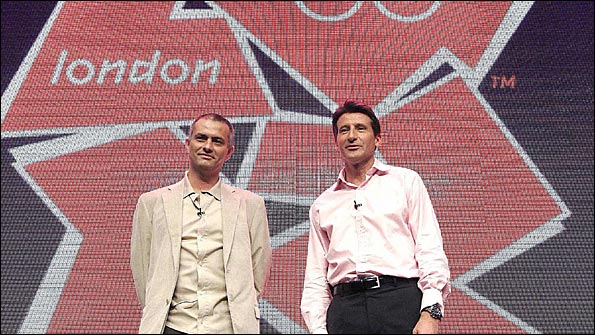 Even now, people are still baffled by the £400,000, graffiti-style design that was launched amid much outcry in 2007. Since then, London 2012 bosses have insisted the logo, created by brand agency Wolff Ollins, has become a hit, pointing to the flexible way it has been used by sponsors.

They also claim they have learned the lesson from the logo launch, where lawyers prevented them from showing the design in all its various formats for fear of piracy, as they attempt to avoid another negative public backlash.

That's why Olympic organisers are so anxious to reveal the story behind the mascots, which are formed from two drops of steel used to make the Olympic Stadium in Stratford.

They have hired leading children's writer Michael Morpurgo, author of the hugely successful War Horse novel that has now been adapted for stage, to construct a back story for the characters.

Given the reaction to the logo, it would have been tempting for London to play it safe and go for the sort of cuddly animal usually associated with major sports events (Berlino the Bear at the 2009 World Athletics Championships in Berlin, for example). 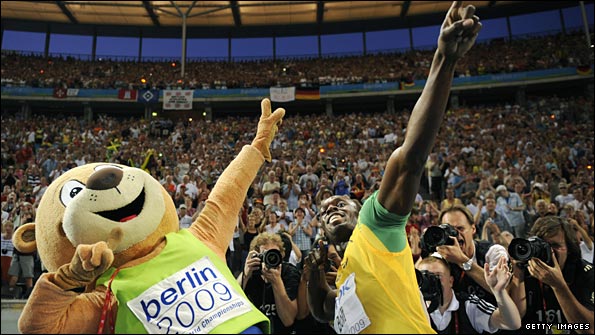 Berlino the Bear was a hit with athletes and spectators alike. Photo: Getty Images

But as London Organising Committee (Locog) chairman Lord Coe has already told the BBC, the mascot is a crucial part of the overall ambition to use these Games to reconnect children with sport - and Locog is prepared to take risks to achieve that.

If successful, it would not be the first time a left-field approach has paid off. In Barcelona in 1992, Cobi the cubist dog proved a huge hit for avant-garde artist Javier Mariscal. Interestingly, Michael Payne, the respected former head of marketing for the International Olympic Committee, initially vetoed the design, thinking it would never catch on.

If London's mascots take off, they can become an important part of Locog's commercial strategy. The logo and mascots are the two key drivers behind the capital's merchandising and licensing operation.

London 2012 will make money from selling goods carrying the logo or the mascot design as well as from companies who pay them 6 to 7% in royalties for the right to use them on their products.

In total, London 2012 aim to raise about £70m in this way. It is not a huge amount when one considers their £2bn budget and the £620m they have raised from sponsors already, but it is not insignificant.

One of the questions Locog will surely face is whether all the money from their merchandising operation should go to help pay for the bill for staging the Olympics. Should £1 from every mascot sold, for example, go to a London 2012 charity or to help fund our team at the Games?

But the mascot is more than just a money-making device. It is another symbol of the type of Olympics London will stage and a useful tool to remind people that the Games are getting closer.

Get it right and it will become part of an overall feel-good factor around the Games. Get it wrong and it could join the logo and the budget as another embarrassing setback.

Most people will probably react with bewilderment when they see London 2012's mascots Mandeville and Wenlock for the first time.

But after seeing the one-eyed alien-like characters in animated form and hearing the back story by former children's laureate Michael Morpurgo, they may well be won over.

Surprisingly perhaps, the reaction at this afternoon's launch at St Paul's primary school in Whitechapel, East London, was, on the whole, positive. A room of cynical hacks is not always the best place to judge whether something is going to be a hit or not but there was a far more instant and negative reaction to the logo three years ago. 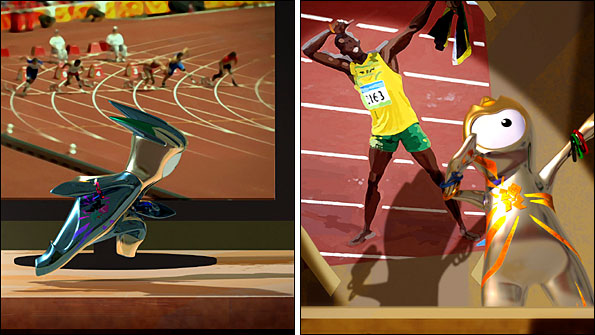 And ultimately, as Locog chief executive Paul Deighton said, middle-aged blokes in suits are not really best placed to judge the impact of a concept aimed at their kids. On that score the reaction from the 100 or so children who watched the film with us in the assembly hall was overwhelmingly enthusiastic.

The names received universal approval. They are drawn from the small town in Shropshire which hosted the Much Wenlock Games and which inspired Baron Pierre de Coubertin to found the modern Olympics and Stoke Mandeville, birthplace of the Paralympics. The idea here is to connect the futuristic creatures to Britain's rich Olympic past.

And whatever you think of the Pokemon style forms, Locog are confident they will be embraced by web-literate kids who will follow them and engage with them on social media networks like facebook and twitter. London 2012 also hope their two year journey to the Games will encourage them to try Olympic sports.

But their only real measure of success will be if they make money for Locog who confirmed today that no proceeds from the sale of replicas or goods containing their image would go to charity or any other Olympic causes such as helping to fund Team GB.

Locog say they could make up to £15m from the mascots - a small fraction of the overall £2bn budget, but no small sum either.

What do you think of them?

Take a look at Olympic mascots through the ages.