Revealed: How Goldman Sachs drew up financial rescue for Liverpool

One of the world's greatest football clubs owned by a group of investors put together by the world's most powerful investment bank.

It sounds far fetched doesn't it? Except, until six weeks ago, it was one of the options being looked at by Liverpool's beleaguered owners Tom Hicks and George Gillett.

According to senior sources I have spoken to over the last day or so, Goldman Sachs held detailed discussions about fronting a refinancing of the club back at the end of February.

A spokeswoman for the American banking giant denied they were ever considering a takeover bid and insisted the project never got to a "serious level", but banking sources have confirmed that Goldman Sachs held "exploratory discussions with a view to a possible investment" in Liverpool.

Exact details of that investment remain unclear but it is thought representatives of the bank were working on a deal that valued the club at around £500m.

Talks were held over several weeks and two Goldman Sachs representatives even attended Liverpool's 1-0 victory over Unirea in the Europa League on 18 February, although they did not sit in the directors' box.

The bulk of the money for the takeover was to come from loans - either provided by Goldman Sachs directly or a syndicate of other banks - with a smaller percentage of the capital coming from at least two private overseas investors. Goldman Sachs insist they did not instigate the idea and were responding to an interest from wealthy individuals they advise. 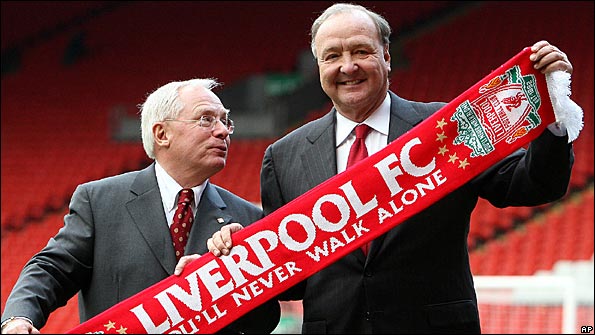 Are Gillett and Hicks asking too much for Liverpool? Photo: AP

In addition to buying the stakes of Hicks and Gillett, the deal would have refinanced the owners' £237m loan with Royal Bank of Scotland, raised new loans to pay for the clubs' stalled new stadium project at Stanley Park and provided a fresh injection of transfer funds for manager Rafa Benitez.

Although the bank worked up what was described by one source as "a viable business model", which was primarily based on the vast increase in revenue associated with the move to a new purpose-built, 60,000-seater stadium, Goldman Sachs eventually decided to drop the plan.

There were concerns over the valuation of the club, which they believed to be too high, and the negative publicity attached to a deal involving one of English football's most revered institutions and a bank that has come to symbolise the worst excesses of the banking sector.

You may wonder why anyone should be interested in a deal that didn't come off. All sorts of ideas are floated in football by all sorts of financial advisers and City institutions all the time.

And for regular watchers of the Liverpool ownership saga, this will go down as just another false dawn for a club which is now in serious danger of sliding out of the Premier League's top four thanks, in no small part, to the ongoing boardroom instability.

But it is significant on two counts.

Firstly, Goldman Sachs is arguably the biggest and most successful bank in the world. Besides the Red Knights project at Liverpool's rivals Manchester United - which is more a personal crusade by the bank's head of global economic research Jim O'Neill - these masters of the universe have never previously shown any interest in getting involved in the Premier League.

Secondly, it is revealing that a deal put together by a bank of that stature - and after so many failed attempts to resolve the financial problems at the club - still fell down because the price Hicks and Gillett were asking was too high.

Now, with time running out for Hicks and Gillett to pay off £100m of their £237m debt with RBS in July, the owners have been forced to take drastic action.

In the next few days, they will appoint British Airways chief Martin Broughton as their new chairman. He will work with a new investment bank, Barclays Capital, to lead the search for a new buyer.

In light of this development, RBS have extended the repayment date for their loan by a further six months. And that will give Broughton the breathing space he needs to ensure the next time a serious player like Goldman Sachs shows an interest, they don't decide to just walk away.

Update 1600 BST: Interesting this - the American news agency Associated Press filed a report which says the Goldman Sachs proposal - outlined in my blog - involved the owners of two US sports teams.

The report doesn't name the owners involved but does report that the plan included Goldman Sachs taking a share in the club.

It adds that the consortium was made up of other British and American banks as well as an Asian real estate developer.