English football is searching for a new leader after Football Association chief executive Ian Watmore became the latest victim of the game's curious appetite for self-destruction.

A series of disagreements with senior figures on the FA board - most notably the Premier League chairman Sir David Richards - convinced him that for all the talk of wanting to change, the FA remains a dysfunctional body, crippled by competing agendas and historic vendettas.

His departure after just nine months in the job is all the more damaging as the former civil servant was making good progress with arguably the most influential figure in the sport, the Premier League chief executive Richard Scudamore, after his breakdown in relations with the FA chairman Lord David Triesman.

The exact nature of his disagreements with Richards are still unclear - although one source suggested it could be related to costs and staffing levels at the FA's Wembley headquarters.

For his part Richards is known to be bemused at his role in Watmore's sudden exit. He acknowledges there were differences of opinion but he views these as the rough and tumble of football politics.

Whatever the truth of it, Watmore clearly came to view Richards as the obstacle in his path to reform. And for a man used to making quick decisions in the City or Whitehall this was too great a frustration. He resigned his post on Friday. 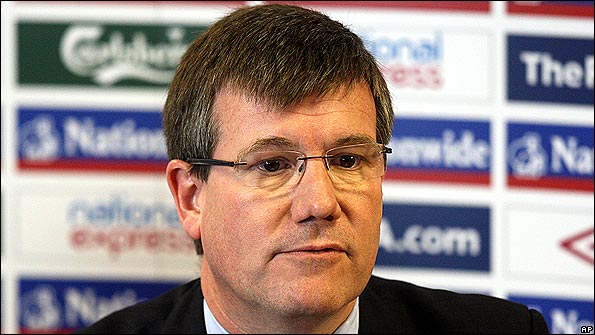 Lord Triesman, who said on Monday he deeply regretted Watmore's decision, had hoped he would persuade him to stay over the weekend.

But on Saturday morning an e-mail was leaked to a national newspaper of a briefing given to the board and other senior FA figures on the appointment of new marketing and communications director Julian Eccles. The briefing gave guidance on how to answer media queries on the former Department of Culture special adviser, who, like Triesman and Watmore, might be viewed as another political appointment.

Watmore is understood to have been furious at the leak - seeing it as an attempt to humiliate him and create tension with Triesman. He fired off an angry e-mail to every member of the FA board dismissing talk of a split and promising to punish the person who leaked it.

The BBC has now obtained details of the e-mail, which Watmore sent at 1710 GMT on Saturday.

Watmore writes: "I don't know which sad person thought to brief yesterday but we know it had to be from this list as you are the only people who received it.

"I have three things to say: There's not a cigarette paper between me and the chairman on any issue and he is a man of ethics, character and courage, rare in my experience of any walk of life let alone football.

"If I ever find the person who leaked the briefing then I will ensure that that person's reputation is damaged beyond repair. This is the last time I share any information in advance."

The tone of the e-mail - highly confrontational and extremely unusual for any chief executive in addressing his board - drew a swift and angry response from Bolton chairman and FA board member Phil Gartside who called for a meeting to discuss Watmore's position. In the end it was academic. Watmore had already decided to go.

Such petty squabbling and chaos at the FA does the game no good. With only 79 days to go to the World Cup this is a distraction English football could do without - although the FA insisted his departure would have no impact on manager Fabio Capello's plans for South Africa.

The repercussions for England's 2018 World Cup bid could be more serious. Watmore may have had no direct role on the campaign, but England's rivals and the rest of the football world will be enjoying this latest round of friendly fire.

Perhaps most importantly Watmore's departure provides politicians gearing up for the general election with the perfect excuse to call for a vote-winning crackdown on the people who run the people's game.

Prime Minister Gordon Brown is known to be alarmed at the levels of debt in the Premier League and the lack of financial regulation. He has spoken of his desire to see the sport return to its community roots.

But until the FA finds a leader who can heal the organisation's own bitter divisions, how can the FA be expected to deliver a vision for the future of the sport?