The Somerset cider apple that took 25 years to grow 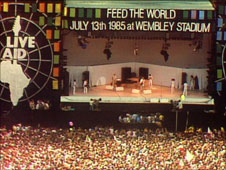 The USSR chose a new leader, one Mikhail Gorbachev.

And in Long Ashton, outside Bristol, a young research pomologist began work on some new cider apples. 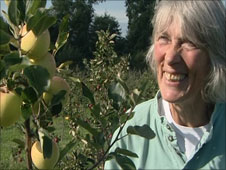 When I met Liz at her trial orchard near Sandford, North Somerst, I am overwhelmed with the sheer patience of the woman. How can you stick at something so long? Why does it matter so much? And with over 350 varieties of cider apple already, why do we need four more?

Listening to her, I learned about the craft of an ancient industry. About attention to detail, and most of all, what cider-makers mean when they tell ministers they need "long term stability".

The orchard might be backlit by some pleasant autumn sun, but there's nothing romantic about this work. Lizzie and Angela, two of the new varieties, produce a crop about a month ahead of traditional cider apples. Most cider makers are starting to harvest around now, the beginning of October, and their presses will run flat out until December (ish). So a crop that can be put through early is a moneyspinner.

And why does it take 25 years to develop a new hybrid? I'll let Liz explain that one.
"We had to make sure they hadn't got any pests, we were looking for something easy for the growers to handle, a tree that would crop every year with nice large fruit to it."

Modern cider orchards contain lots of smaller trees, planted closer together than traditional orchards. Instead of huge spreading trees, with apples on the sunny side ripening ahead of those in the lee of the tree, growers prefer plants about nine foot tall. Lizzie and Angela will be even closer together, allowing mechanical harvesting similar to techniques used in modern vineyards.

So behind the soft focus shots of rosy apples and the promise of cider, this story is really about technical innovation. It could be a new car coming out of Honda in Swindon, or a fancy new wing design from Airbus. It just happens to be an apple.

But there's politics in these apples too. Cider makers are still locked in a battle with the treasury, defending their duty which is around half that levied on beer. Why? Because unlike beer, cider is a long term business. 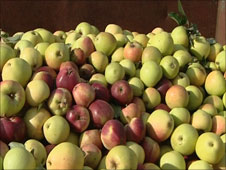 Martin Thatcher, whose land carries the trial orchards, shows me round his huge commercial cider mill. A tractor tips seven tonnes of apples from a trailer into a huge fruit pit. From there, the apple's journey is automated all the way to the bottle. So how long until we see a bottle of "Lizzie"?

"After the tests, probably another five years before we get a commercial orchard ready to pick. It will be ten years before these apples start making me any money."

From 2004-9 cider tax was held level. During this time, there was huge investment and huge expansion. Thatchers grew around 30% each year, recession or no recession. Then Alastair Darling announced the infamous 10% Cider Tax, and everything wobbled.

The coalition, of course, has revoked this, but uncertainty remains. Should Mr Thatcher plant up acres of Lizzie and Angela? If the taxes are to remain low, of course he should. But he needs that stability for at least a decade.

Cider is not the only industry that needs stability from government. But when you see an apple that has taken 25 years to grow, and won't make any money for another decade, you understand what they mean by long tem investment.

Hello, I’m Dave Harvey – the BBC’s Business Correspondent in the West. If you’re making hay in the markets or combine harvesting; scratting cider apples or crunching tricky numbers – this is your blog too.

You can stay up to date with West Country Cash via these feeds.