As I approached the door to the Lennon suite at the Hard Days Night Hotel in Liverpool the air was thick with guitar strumming occasionally punctuated by the unmistakable tones of one of the Gallagher brothers.

I knocked on the door and listened to the music getting closer... it opened "Aright kid. Getin eor. I've seen you on tele man". "I'm also aware of your work," I responded.

The suite's main room had a giant white piano at one end and an enormous black leather sofa at the other in front of a picture of the Fab 4. "They inspire me man," Liam said as he mentioned his band - Beady Eye - had been playing in Nottingham the night before.

"I missed Citeh man but I heard they were bobbins". His team had lost three-nil at Liverpool and Liam wasn't happy. "I can't work Mancini out man. We need Mourinho... he'd be mega".

We chatted while the crew set up for our Football Focus interview. His agent, Steve, reminded me that this was the first football interview Liam had done. "I normally let our kid do the talking," interjected the guitar strummer.

I'd interviewed Noel and the rest of Oasis when they were at the peak of their powers in 2000. I remember arriving at the record company HQ in London and being introduced to the band - everyone except Liam. "His head's gone man. He's not coming," said Noel.

I'm not sure whose head has gone this time but it's safe to say the brothers are currently not seeing eye to eye. He did mention his sibling briefly in the six minutes we ran on Saturday and you can see the full interview here.

We've had plenty of comments and emails about the interview since Saturday - the vast majority of them being positive. Some asked why we would even want to speak to him but I think he's one of those people who you listen to even if you know what he says will make you angry.

He certainly plays up to the image of a rockstar but he was much wittier than I expected. You don't have to be called Sebastian (as he suggested in the interview) to be offended by some of his language but he has a good sense of humour and a sharp tongue.

Some people suggested I looked a little scared during the interview which I find a bizarre. I like interviewing people who make you work for the answers and a bit of confrontation goes a long way to making something watchable. I also maintain that there is nothing wrong with the occasional tucked shirt! Having said that, I do take the point of the guy who tweeted me to say that if you're going to interview a style guru, with the hottest clothing line on the high street, you might want to iron your shirt!

Mark Woodward, the producer, did have to spend quite a bit of time editing out the choice language and there were some things Liam said - and did - that we couldn't put out even on a post-watershed version of Focus.

That said, I thought his opinions on City, Mancini, United, Rooney and football in general were well worth the airtime and, even if you're Gary Neville's biggest fan, his take on the former Manchester United defender brought a little smile to most faces.

Once the interview was over Liam had another dig at my shirt before saying he might bump into me at Wembley on Saturday. We didn't see each other at the Manchester derby but I'm sure he enjoyed himself.

Before we left I asked him for a picture for the blog. "Don't do that rock & roll face," I said "otherwise I'll look like the school prefect sitting next to the cool kid." "You do your face, I'll do mine," he replied. Sadly he did produce the rock & roll face leaving me to look
like a slightly over-medicated buffoon. 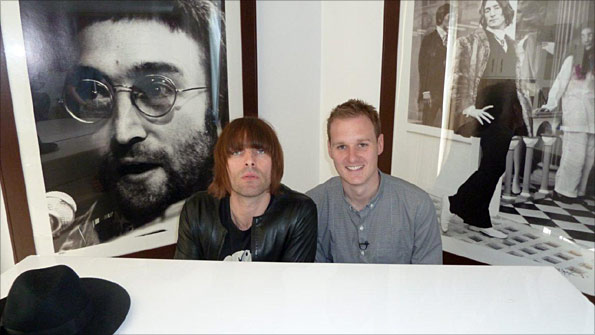 Say cheese... Smiling for the camera is not obligatory for rock stars

Mr Gallagher features again on the show this week, with some rather interesting Premier League Predictions. He also has some style advice for the man he's talking on, so definitely worth a watch at our earlier time of 1145 BST.

I was also mightily impressed with Danny Higginbotham on the sofa last Saturday and I'm sure he enjoyed his weekend at Wembley just as much as the bloke with the guitar.

This week we are live in Cardiff once again for the build up to Cardiff v QPR game. I'm actually doing Focus and then staying on to do the live Match of the Day. I need to check there is enough time inbetween programmes for me to destroy some cake.

If you have any questions about the Gallagher interview, any observations about the show or general comments or queries then chuck them down and I'll get back to you.