Waiting for Eric in the Big Apple

I received the following tweet on Saturday: "My gran has just asked why Football Focus are interested in what Zak Dingle thinks."

Eric Cantona's hat and beard combination was obviously enough of a disguise to confuse a few viewers but the interview with the Manchester United legend and now director of football at New York Cosmos caused plenty of interest and controversy nonetheless.

The official website of the Cosmos crashed during the show and by the end of Saturday our Cantona piece was the ninth most tweeted video in the world!

If you missed the show - or you watched it and wanted more - here is the full edit.

We have had hundreds of positive responses to the interview but it would be remiss of me not to mention that it was not enjoyed by everyone.

Cantona clearly splits opinion and, as I mentioned on Saturday, there are some Crystal Palace fans who link his kung-fu kick in January 1995 to the death of Palace supporter Paul Nixon at the FA Cup semi-final between Manchester United and the London club in April of the same year.

We did consult with Crystal Palace fans before the interview went out but understandably we still had calls from people concerned that we were giving undue publicity to Cantona and his actions. With strong, emotive subjects such as this we always try to provide a balanced account and let viewers make their own individual judgement.

When Cantona raised the subject of the kung-fu kick in the interview and described it as the highlight of his career, I pushed him on the incident and insisted that he must be joking. I also suggested that he should not be encouraging that sort of behaviour. He agreed, concluding that his actions at Selhurst Park were a "mistake".

Clearly, that will not be enough for some Crystal Palace fans, who are understandably sensitive to anything that comes out of Cantona's mouth. I would be interested to know your thoughts after watching the piece but I also wanted to provide some background to the interview itself...

I was in New York for about 18 hours in total, so there was not much time for sightseeing. We spent our first few hours there filming a few links for the opening of the show before making our way to the arranged meeting point in Soho. That did not go according to plan. For a few hours, we were quite literally "Looking for Eric", spending 90 minutes waiting for him in a dimly lit hotel corridor. 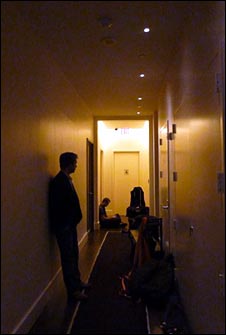 When the door to a hotel room eventually opened, we were introduced to Cantona, who was eating an apple, a big apple. The Frenchman then left for 15 minutes while producer Chris Grubb and cameraman Giles Harvey prepared the room for the interview.

I used the time wisely to hoover up some of the very snazzy grub that was on a huge table by huge windows. Normally I have a serious flan aversion but there was a cheeky fruit number that went down particularly well.

Cantona returned, finished off the apple and sat down for our interview. Just before we started, I asked him if he was wearing the hat for the interview. He gave me a Gallic stare, paused and said: "Of course."

I have spoken to him on a few occasions in the past but he seemed far more relaxed this time - and slightly mischievous. I felt like he really made me work hard for the answers and was always trying to take control of the interview. Normally, I have a good idea how people will react but most of his responses came as a surprise.

Cantona knows exactly what he is doing. He knows his job is to get as much publicity for the New York Cosmos as possible, so when he spoke about the kung-fu kick and being a "prisoner of his memories" there was a telling look on his face that said "that's your story there, young man".

There was one point where he stood up and started taking his microphone off. I asked him what he was doing and he said it felt "like a good point to finish". I laughed and asked him to sit down because I had some more questions for him. Thankfully, he agreed.

Once we had really finished, he smiled, stood up, shook hands with everyone and left the room. One of his entourage came back and said that "the biggest compliment I can pay you is that I think he enjoyed that".

I went back for one last slice of flan before we packed up and headed to the airport. I bumped into Cantona again in the lobby, where he was eating yet another apple. I think I might have stumbled upon the source of his footballing powers.

Cantona does seem genuinely passionate about the job in New York and plans to move his family out there next April. I am not convinced he will achieve his plan of making the Cosmos the best team in the world but it certainly will not be dull with him at the helm, that's for sure.

If you have any questions or comments about the blog, the interview or the show then feel free to put them below. If you want to follow the build-up to this week's Focus the best thing to do is track me down at twitter.com/danwalkerbbc