Bonjour comrades and merriments of the season to one and all! In time honoured tradition, I thought I'd give you a little insight into last Saturday's show from Villa Park.

I'll be honest, I was a bit worried ahead of the programme because Villa were on a dire run of form and manager Gerard Houllier was getting grief from the fans for what he said and did when his side side lost 3-0 to Liverpool at Anfield on Monday night. Thankfully, the club were happy to play ball and gave us great access to the stadium.

My great Midlands adventure started on Wednesday, when I travelled up to film the opening, which you can watch again by taking a look at the online version here...

The producer for the shoot was Welsh legend Dave 'Mad Dog' Purchase. Dave has a reputation as a brilliant film-maker but doesn't work like most humans. I half expected to turn up at Aston University's sports ground to find a hot air balloon, a flock of geese and some plastic explosives. I discovered Dave with 30 jam doughnuts. His plan was to use the food as a bargaining chip to get the university's rugby and football teams out of bed before midday and down on the snow-covered pitch.

Villa were formed back in 1874, when members of a local church cricket team wanted something to do in the winter. They settled on a football team and their first game was against a rugby side, a contest that devoted one half to each sport. We planned to recreate that moment for the Football Focus cameras.

They were all top lads and shivered for a good 30 minutes while we did our fancy telly stuff. I have to say, though, that the rugby team's defensive formation was a little wayward during the football. They seemed to position everyone in the six-yard box and rely purely on intimidation, which worked, rather worryingly. 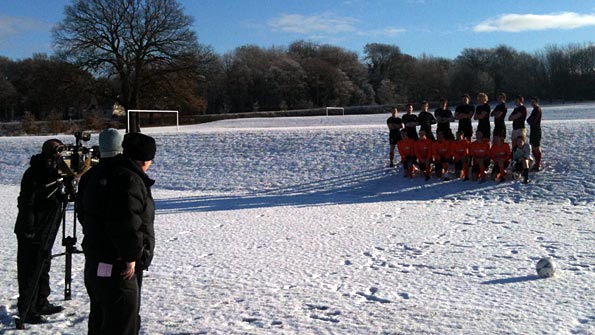 Once we waved goodbye to the doughnut-eaters, the rest of the shoot was relatively straightforward. We went to the church where it all began for Villa and then popped down to the ground to film various little links to chuck in here and there.

Producer Dave is seriously old-school when he composes a shot, even crouching on occasions to pull out the finger picture-frame. It's a bit like working with Francis Ford Coppola. Sadly, we had to cut the bit where I hacked a water-buffalo with a machete on the stairs of the Holte End. I'm kidding, animal lovers!

When we go on the road, we try to take the time to publicise the show as much as possible. Last week, we went into overdrive. We promoted it during BBC Two's live game at QPR on Friday night and on BBC Breakfast on Saturday morning. I also appeared on BBC WM's breakfast show and Midlands Today, while Mark Lawrenson did the local BBC Friday football phone-in and Martin Keown popped up in the Birmingham Post.

My only regret was boldly predicting the results of the Villa v West Brom and Wolves v Birmingham games on Midlands Today. Lawro texted me immediately to suggest I was an idiot. He was right... I got them both wrong.

We had one slight hiccup on Saturday morning. I was desperate for the toilet 15 minutes before we went on air. The only one close enough belonged to Houllier. Thankfully, the steward was kind enough to let me use it... I don't think I could have survived until 1pm.

The show itself went smoothly and I thought Dion Dublin and Cyrille Regis were great guests. John Motson put some tough questions to Villa chief executive Paul Faulkner and the "Football Focus does Question Time" section went down well. In the future, we might try a show in front of a live audience. If you would be up for that, let me know.

This week, we return to the sanctity of the studio, where Lawro and Lee Dixon will be joined by Dennis Wise. I'm sure one or two of you will have a question for him. Garth Crooks has been to see Joe Hart this week and I'm speaking to Alan Pardew. There is also one other signifcant interview we hope comes off. Finally, we'll have a special report from the Brighton and Notts County game, which takes place on Friday night, and look at the plans to change the face of Scottish football.

Last week, I said there would be no more random football teams on here but I will sign off for 2010 with a Festive XI from Twitter (see below). And don't forget to add your questions for Wise and any other comments you might have below. As always, you can follow the show at twitter.com/danwalkerbbc. Merry Christmas!