Lord Sugar on Sir Alex and the Special One

The football office here at the BBC is an eerie place this week. The vast majority of staff are working on the Commonwealth Games a few floors down at Television Centre so I am tempted to practice my off-spin in the large gap between the desks without the fear of my unreliable wrong 'un ending up in someone's face.

Anyway, preparations for this week's Football Focus show are bubbling away very nicely. We will be live from the home of Sheffield Wednesday on Saturday but I wanted to take this opportunity to mention the great response to the piece we broadcast on St Pauli last week. We have received loads of e-mails and tweets about the team from Hamburg, who have already been adopted as many people's second club.

For those that may not know, St Pauli have been around since 1899 but it was only in the 1980s that they developed their cult following. Students - and those whose political views leaned left - started moving into the area where the club was based and began attending matches as a way of expressing their strength of feeling for a "different" way of thinking. Crowds quickly grew from less than 2,000 to 20,000 by the end of the 1990s.

St Pauli also took a stand against fascist football hooligans, banning any nationalist symbols from the stadium, while supporters adopted the skull and crossbones as their unofficial emblem. The current coach, Holger Stanislawski, wears a hoody and jeans in the dugout! As I said on Focus on Saturday, I cannot imagine Sir Alex Ferguson or Arsene Wenger choosing such attire but Ian Holloway could probably get away with it.

If you missed the piece on the club you can see Damian Johnson's report below. The piece on St Pauli is 18mins 10 secs in...

From the number of comments we received about Damian's piece, I think it is fair to say there is a significant number of fans who wish their club was like St Pauli - and with the likes of Bayern Munich, Bayer Leverkusen and Werder Bremen still to visit the Millerntor Stadium this season, I think one or two trips to Hamburg might be planned.

From a club that are pretty sure of themselves to a man who feels exactly the same way. I know Lord Sugar has been on a country wide publicity tour, taking in every radio station and television show known to man, but he was still worth a seat on the sofa last week.

Yes, the man has a book and a new series of The Apprentice to publicise but he has some forthright views on almost anything - as Lee Dixon found out.

Mr Dixon is into his cycling and recently returned from a trip over the Pyrenees - something he told Lord Sugar. The master of the boardroom started telling Lee which bike he should be using, which gears he should fit and what the best riding position was. Lord Sugar is a man who knows his onions and doesn't mind talking about them. 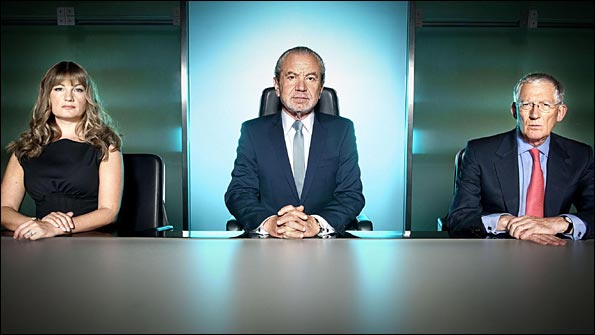 Lord Sugar has just fired his first victim in the new series of The Apprentice.

He strolled onto the sofa halfway through the show and immediately started producing the goods. First, it was Spurs and then it was Jose Mourinho. Just before we went on air, I told Lord Sugar over a chocolate croissant that we had an interview with Mourinho on the show and he said: "Make sure you ask me about him... I've got something to say."

When I asked him whether he was a fan of the 'Special One' he replied: "'Special One'? Get him down to Leyton Orient and we'll see how special he really is!"

Mark Lawrenson and Lee were particularly unimpressed with his idea that Sir Alex could and should be the next England boss but, as Lord Sugar pointed out, he knows him well and he genuinely thinks it could work.

When I used to work in Manchester, one of my jobs was going to see Sir Alex twice a week for interviews. There are one or two future blogs in that but I asked him about the England role every time it came up and the proud Scot always laughed my questions off and said he was not interested in the job and never would be.

I don't know what you think but I can never see it happening. But Lord Sugar was insistent - and he doesn't exactly have a record of getting things wrong, does he?

Anyway, back to Sheffield Wednesday, who have suffered their fair share of ills over the last few year as a result of a series of bad decisions. This Saturday, we will hopefully give you a real insight into the trouble they are in.

Remember where they were in 1993? When Chris Waddle and Mark Bright scored the goals that gave the Owls victory over Sheffield United in the FA Cup semi-final, they were fourth in the Premier League and also through to the final of the League Cup.

Last week, they were served with another winding-up order and the bank who owns them is willing to write off £25m of debt if someone buys the club for £5m.

If you have got any comments or questions about St Pauli, Lord Sugar or Sheffield Wednesday, just let me know. And if you want to follow the build-up to the show, the best place to do it is at twitter.com/danwalkerbbc.