"Sorry it's so early but what do you know about Rooney?" was the text that greeted me at 0630 BST on Monday.

Thankfully, I had already been up since 0200 and my wife and I had been on the labour ward since 0515. Child number three eventually arrived at the perfect Richie Benaud time of 0222 so goings on in Wayne's world were the last thing on my mind.

The answer to the question is that I don't know much more about Rooney than has already hit the front and back pages of the papers. I interviewed the England striker three times last season and I must admit to being slightly surprised at what has happened over the last few days, given the content of those interviews.

Last November, I asked him if he would be tempted to leave Old Trafford when Ferguson eventually stood down.

"I love the club and am really happy," replied Rooney. "So, whether he goes or not, the very thought of leaving the club has never entered my mind."

Eleven months is a long time in football.

I was interested to see how Sir Alex Ferguson reacted to Rooney's decision to quit Old Trafford. Those of you who read this blog on a regular basis will know that I spent about three years of my life interviewing him twice a week and attending every one of his news conferences. I have seen him at his most cantankerous but Tuesday was the closest I have seen him looking genuinely hurt. He also disclosed more than he has done before.

Ferguson does not normally do his dirty washing in public. I remember him pummelling journalists for revealing details about Ruud Van Nistlerooy's knee injury and angrily refusing to be drawn on the reasons for Jaap Stam's departure. I was even banned myself for asking him about reports from Madrid that Real had done a deal to sign David Beckham.

That is not the only reason Tuesday's disclosure came as a surprise. Ferguson's press conferences are often cagey affairs, especially before a Champions League game. Unlike the club's own press conferences, European ones are hosted by Uefa. That means everyone gets to go - even the BBC!

Whenever there is a big issue to discuss, the room is full of cautious journalists all wondering who will ask the contentious question and how prickly the response will be. Opportunities to probe Ferguson on subjects from Beckham to prawn sandwiches have been met with anything from a polite "no comment" from the press officer to a proper head-chewing from the boss himself.

That said, there are certain occasions when the Scot, like all savvy managers, will use the media to further a cause or get his message out there. He did it to great effect in response to Rafael Benitez's rant in January 2009 and on several other occasions where the cold hand that normally meets the press becomes a slightly more hearty handshake.

There was an element of that on Tuesday but also a rare vulnerability from Ferguson. He looked betrayed and a little baffled as he talked about the trophies Rooney has won with United and the pastoral care that has been given to the player. It was a masterstroke of man management, even if the man might not be under his management for much longer.

To use a tennis analogy, Ferguson served a kicker to Rooney, wrong-footing the striker and forcing him into unfamiliar territory outside the normal boundaries of the court.

So what of Rooney then? Well, I asked him about his future twice last season and he laughed it off on both occasions. It was not quite "once a Blue always a Blue" but it was as strong a statement of loyalty as you get to hear from a modern-day footballer. Afterwards, I was ticked off by his representative for even suggesting he might move.

My mind goes back to the interview we did at Old Trafford with Rooney and his favourite band. Stereophonics frontman Kelly Jones is a close friend of the England player but also a big Leeds United fan. Just before the interview began, Jones offered the striker the chance to turn out at Elland Road. "I am sure Ken Bates could sort something out," said Jones. Rooney laughed and replied: "I am never leaving this place, mate." 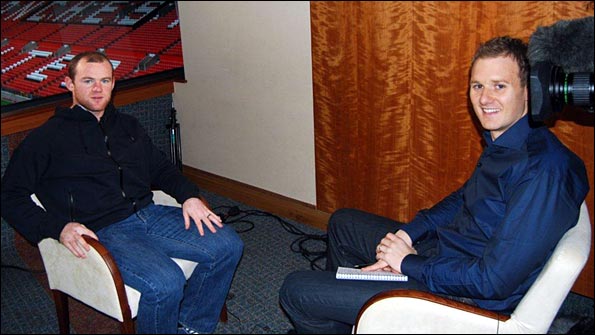 Sitting down to talk football with Wayne Rooney

Now the player claims it is a lack of ambition rather than a lack of cash that is the root of the problem. So where does the blame lie? Is Rooney just another greedy footballer? Is it the fault of a controlling manager? Or is it time to point the finger at the owners, the Glazer family?

The fans group which wrote an open letter to Rooney on Tuesday were firmly behind the manager and pleaded with the player to be honest with them. They also highlighted all those players who have left Old Trafford for greener grass and struggled to find it.

Whether he moves - and the possible destination for the 24-year-old - will keep us busy for a while. We might have to wait for the real reasons for his transfer. He will probably reveal all in his 17th autobiography! The whole situation proves once again that football is full of surprises.

The Rooney fallout will feature on Football Focus this Saturday. We will also hear from two players who have dealt with transfer speculation in recent months. James Milner talks about his move to Manchester City, while we also have a word with Cesc Fabregas, who was courted by Barcelona in the summer, ahead of Sunday's game between City and Arsenal.

In the studio, we will be joined by QPR goal machine Jamie Mackie, the Championship's top scorer. Watch from 1215 BST on BBC 1.