Cruyff does a turn for Focus

"I know you were in Los Angeles last week but how does Johan Cruyff in Amsterdam sound?" said Football Focus editor Mark Cole last week.

Johan Cruyff always sounds good. Just as we had done with Jurgen Klinsmann, we were interviewing Dutch legend Cruyff for Gary Lineker's documentary this coming Sunday but sneaking in a few questions for Focus.

I spoke to Cruyff back in April when he became honorary president of Barcelona - a role he held for all of two months before Joan Laporta's replacement gave him the heave-ho.

This time we were meeting at the Olympic Stadium in Amsterdam, venue for the 1928 Games, where Cruyff was having an annual day for his foundation and trying to get 1,500 children with disabilities involved in sport. 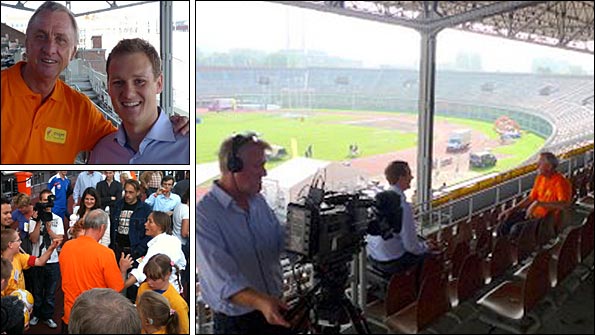 I met cameraman Martin Bobbin at Heathrow at 4.45am, conquering an oaty yoghurty thing before heading out on the 6am flight to Schiphol airport.

We arrived at the plane to be told that fog in Amsterdam was going to delay us for at least an hour but there would be treats to keep us entertained! I don't know if you've ever flown for a certain Dutch airline but the stewardesses all wear the sort of powder-blue trousers that even Ian Poulter would relegate to the back of the wardrobe.

Anyway, they were just about to approach us with iced buns and selected nibbles when the pilot intervened.

"Good news," he announced. "The fog has lifted in Amsterdam and we have a landing slot but only if we leave now. Cabin crews to your take-off positions please."

We got to the Olympic Stadium at 10am and had plenty of time to set up the shot we needed in the old wooden seats just behind the ones for the Dutch royal family. In the Netherlands, Cruyff is pronounced either Krayfe or Krife but I stuck to Cruyff for fear of sounding like the one bloke in the pub who talks about the "Bernabay-oo" and the "Camp Now". You may be right, chief, but you sound like a gibbon.

From the far side of the stadium, I spotted a fella in a bright orange shirt who was steadily making his way through the sea of handshakes towards our interview position. Cruyff may be 63 but he walks a bit like a dancer - in a nice way.

I never saw him play but he sneaks into my all-time top three footballers, just behind Maradona at two and Zinedine Zidane at the top of the shop. The two games the Frenchman starred in against Spain and Portugal at Euro 2000 remain two of the best individual performances I have ever seen and I think Zidane will stay in the gold medal position for some time.

Anyway, Cruyff was a true gent and spoke with real understanding about the problems with English football, the issue of foreigners and why Bert Van Marwijk's side offended him at the World Cup both as a Dutchman and as a footballer.

Cruyff's point is that no-one will remember the good stuff the Netherlands played in South Africa because of what they did in the final. They still talk about the football his side produced in the 70s because it was "unforgettable".

After 10 minutes, I got a jab in the back from his representative but ploughed on for another five before the second jab was accompanied by a hearty cough and a wide-eyed glare. We thanked Cruyff and watched him as he swam through his adoring public. 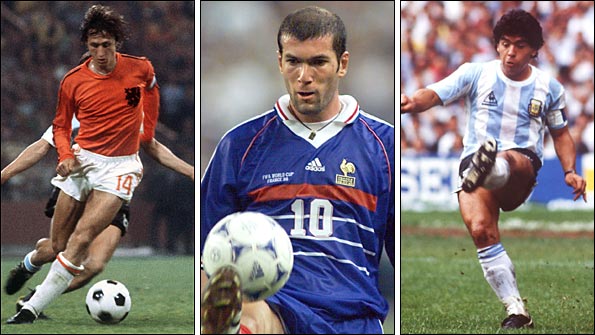 Johan Cruyff, Zinedine Zidane and Maradona - my favourite footballers ever.

Cruyff has flirted with controversy at various points in his career but he is held in high regard in the Netherlands. There are pictures and statues of him all over the Dutch capital. Before we left the city, we went across town to the Amsterdam Arena to film the various Cruyff shrines that adorn stairwells and corridors throughout the stadium.

Bizarrely, I was stopped outside by two girls. They asked for my autograph and a picture. I think I looked a little confused and one of them said: "You are Kurt aren't you?" "Kurt?" I responded. "Ya, Kurt from the TV!" It turns out there's a bloke on Dutch TV called Kurt who sings a bit and looks a bit like me. Sadly, I had to let them down and my attempts to sell the merits of Football Focus fell on deaf ears.

We got a taxi back to Schiphol, nailed a chocolate croissant and headed home. You will be able to see the interview with Cruyff in a couple of weeks on Focus but he will also be featuring in a BBC Two documentary on Sunday entitled Can England Win The Next World Cup? (2130 BST).

Before I sign off, I should tell you about a cracking show we have coming up this week. We'll hear from Jose Mourinho and Gary Lineker, while Lord Sugar will also be spending some time on the sofa.

John Obi Mikel and Emmanuel Eboue will preview the game between Arsenal and Chelsea, while Asamoah Gyan and John Mensah will give us the inside track at Sunderland. We'll also have a special report on German side St Pauli, the self-styled coolest team in world football.

See you on Saturday for that. In the meantime, if you've got any questions for Lord Sugar or you'd like to send me your choices for the top three footballers ever - with or without Cruyff - then fire away.

The best place to follow the build-up to the show is on twitter. You can find me at twitter.com/danwalkerbbc