The BBC bus is making its way across South Africa and our journey is going very well. We've had a few issues but managed to get everywhere we need to be at the right time.

We started in Cape Town last week and so far have been to the southernmost point of Africa, seen the world's first post box in Mossel Bay, watched some big units in Addo Elephant Park and felt the chill wind in Port Elizabeth.

The bus gets driven around by Roger while the rest of us travel in two little vans. I was in one of those when we got a call about a tyre blowout on our generator while we were on our way to Mossel Bay. We all had to turn back, leaving security guard John and editor Rob to guard the generator for two hours in the rain while searched for new rubber. 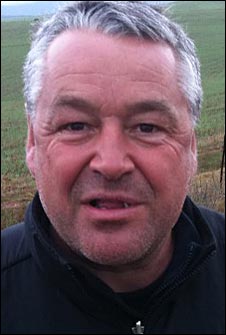 The bus has also suffered some bird damage, with some sort of feathery friend going straight through the windscreen. The ever impressive Roger fixed it with some wood before it was replaced properly. The only man more resourceful then Roger is Micky, our rigger. He can fix anything and is our very own version of MacGyver. He also looks like a combination of Ray Winstone and Sinbad from Brookside.

I have been to many incredible sporting events during my career but it was pretty amazing to be up close and personal with some massive elephants at the Addo Elephant Park.

We were told by our guide, Darlington, who, despite the name, supports Manchester United, that there was very little chance of seeing anything because it was so cold. But we managed to lock horns with five elephants, plenty of zebras and some creatures that looked like antelopes. Maybe they were antelopes.

You should have seen the face of producer Stevie Lyle when he was told there were lions in the park. He spends much of his time in South Africa worrying about shark attacks so the prospect of being lion lunch was enough to bring about a mild panic attack. He sat in the middle of the truck hoping that if there was a hungry maneater around it would use one of the guys nearer the edge as a starter.

We have also seen our first game of the World Cup - Ivory Coast's goalless draw with Portugal. The Ivorian fans were truly amazing. Their football association paid for 100 of them to come to South Africa to support the team - and it is easy to see why. They are only supporters capable of drowning out the vuvuzelas!

Visualise three conductors and an army of singers who bang two pieces of wood together with immaculate timing. Throw in some crazy moves and a bloke in a massive padded suite called 'Papa Elephant' and the result is impressive.

My job after the match was to do what they call the 'flash' interviews. These take place with the players as they walk off the pitch. They do a 'super flash' with the host broadcaster first and then come down the tunnel.

Each broadcasting team puts their interview requests to the press officers from and hopes for the best. We asked for Didier Drogba, Sven-Goran Eriksson, Carlos Queiroz and Cristiano Ronaldo. We ended up getting the first three, but Ronaldo didn't fancy it.

You get around 90 seconds with each interviewee. After the third question, someone from Fifa usually gives you a poke in the back to let you know it is time to wrap the interview up. If you ask another question, the Fifa person gives you grief because the players have up to four flash interviews and sometimes a press conference as well.

Queiroz was quite keen on talking about Drogba's broken arm and questioning whether Fifa should have allowed him to play at all. Eriksson dismissed that view and started every answer with his trademark "well".

We even managed to grab a word with Eusebio. You will be able to see him talking about the four goals he scored in the quarter-final against North Korea in 1966 next week.

The only downside to being in a stadium city on match day is that all the restaurants are packed. I opted for a trip to the garage given the queues, some an hour long.

The wine gums and muffin were allied to a new culinary sensation for me... the Piemans Pieburger. I asked what was in it and was told a "combination of pie and burger". Stupid question really. It had an interesting taste but is one of the few disappointments of our trip so far.

If there is anything you would like to know about the bus, then please get in touch. You can chart our daily progress by following me on twitter at twitter.com/danwalkerbbc