Farewell to Focus but the footy goes on

So that's it. There are still a few cup finals and play-off games to look forward to but we have had the last Football Focus of the 2009/10 season.

For those of you expecting a passionate manly embrace at the end of Saturday's show, I'm afraid it was only a power handshake with Lawro and Lee Dixon followed by fish pie. Can there be a better way to say goodbye?

A few days on, I am sitting in my living room eating a Curly Wurly. There is also a piece of apple strudel in the fridge that is calling me. I always write better when there is food involved.

We have got through a lot over the past 10 months. I've had some rather fruity criticism on here (mostly for talking about Curly Wurlys and apple strudels) but I have to say that I have really enjoyed the interaction over the course of the season. The Focus team certainly appreciates some of the nice things that you have said about the programme.

The show itself has changed a lot since last August. We started with a new editor, new director, new presenter and plenty of fresh ideas. We have gone on the road eight times, attempted a few new bits and bobs in the studio and tried to give you an insight into how things work behind the scenes.

That was my plan with this blog as well - to open a few televisual doors that would otherwise be slammed in your face. Right from the start it was meant to be a bit of light-hearted fun looking at everything from how we got an exclusive interview to the best filling for a jacket potato. 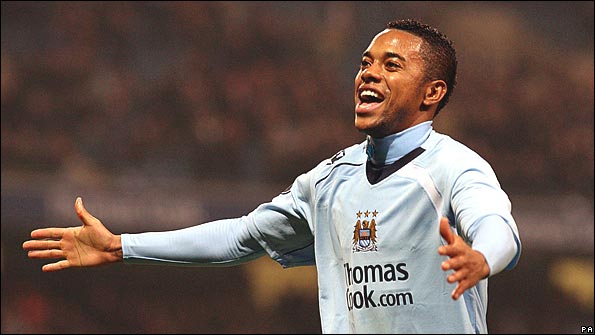 Robinho was not as permanent a resident as planned at Eastlands

We heard Robinho tell us he was going to stay at Manchester City for five years (he left five weeks later) and we learned that Prince Charles was a Burnley fan (sort of). I told you about a shambolic meeting with Jordan (the model not Simon) and we came together to discuss the merits of revisiting a chocolate bar from one's youth (Toffee Crisp).

You shared your attempts to win over friends to the beautiful game (most of them useless) and we embarked on a scheme to find the 20 nicest men in sport (and then I got hammered for not including any women). Wayne Rooney popped up a few times and I scored an overhead kick while training with Kevin Davies - something that inspired a list of our greatest sporting achievements.

We went to the Nou Camp and bumped into Johan Cruyff and Sir Bobby Charlton, discovered the delights of press box food and listed the top five Christmas nuts (the humble cashew came out on top).

On the serious side, Emmanuel Adebayor spoke at length about the reality of staring death in the face while (most recently) you shared your harrowing memories of the Bradford fire after our live programme from Valley Parade.

It has been the best 10 months of my career so far and I have really enjoyed working with our pundits and the numerous guests to have taken their seat on the sofa.

While consuming my fish pie last Saturday, Lawro reminded me of the most random moment of the season when Dixon decided to shout "Saha!" in the middle of the programme. I seem to remember the outburst came after a discussion about a game between Manchester United and Everton. I had just started introducing the next item when Dixon shouted "Saha!" at the top of his voice.

He explained that he had forgotten to mention the striker during the chat and, rather than do what most humans do and keep quiet, decided to put it right. It might have interrupted the flow of the programme but I really hope Dixon throws in a few more random footballers next season. "Ian Woan" would go down particularly well but I cannot see it happening.

Apart from the shouting, we have some grand plans for next season's Focus. Hopefully the show's boundaries will be stretched a little more and this blog will return when the season kicks off again in August (if they still want me to do it, that is).

There might be some blog-based fun from South Africa over the course of the World Cup as well so make sure you keep an eye out for that. I will be on a double-decker bus for most of the tournament, travelling around the country to gather as much football-related stuff as humanly possible.

So South Africa will be upon us soon and for the next few weeks I will be involved in planning meetings and briefings. I might even manage a trip to the golf course.

But before the World Cup takes over I want to take this opportunity to thank you for all your comments, questions and ideas over the season. It means a lot that many of you enjoy this blog. For those who aren't so happy, please feel free to come on and unleash the rage.

So let's finish off in style with a random prediction for something that will happen between now and August. Dixon reckons Arsenal will buy a £20m-plus player, while Lawro has tipped Chile to do great things at the World Cup. Anyone whose predictions come true enters a draw to win a Wham bar and an apple strudel!

If you want to know what I'm up to between now and the World Cup you can follow me on Twitter at twitter.com/danwalkerbbc

I love you all, apart from Joel in Swindon who sent me an e-mail saying I had a head like a brazil nut!