Messi, Cruyff and my trip to Barca

Regular readers of this blog will know I went to Barcelona last week to interview the president Joan Laporta for Football Focus, which you can watch by clicking the link.

Sadly, the second leg of the journey to Milan did not come off. No matter, the visit to Catalonia was incredible. We got our meeting with El Presidente - eventually - but along the way we also encountered Lionel Messi, half the Barcelona squad, Eusebio, Sir Bobby Charlton and Johan Cruyff.

This is part one of the story of our trip - part two will follow next week.

Producer Andy Fraser, camera wizard Jonathan Gout and I all left for Barcelona (via Madrid) last Tuesday morning. Both my travel companions are interesting characters. Fraser looks like Paul Scholes, Nicky Butt and Robbie Fowler all at the same time while Gout is a martial arts expert who once almost killed me with his index finger! 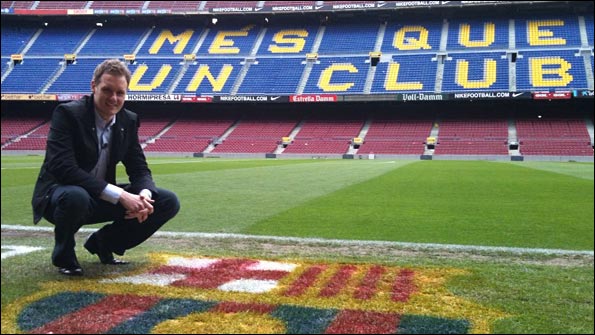 Getting a feel for the Nou Camp

The plan was to get accredited for the Barcelona v Arsenal game and then start filming the following morning. When we arrived in Spain, we learnt that the game was hideously oversubscribed and there was no room at the Catalan inn.

Rather than kick up a fuss, we decided to watch the game with some locals in a little bar off Las Ramblas. When Nicklas Bendtner scored, several pieces of chorizo were thrown at the telly. Once Messi started doing silly things to the Arsenal defence, the locals became far friendlier.

The owner was so happy I think he forgot to charge us for one our our 17 plates of patatas bravas. He had two dogs that strolled around the joint - one called Messi, the other Cruyff. Messi got a treat every time his namesake scored a goal... he looked considerably fatter than Cruyff!

On the way to breakfast the following morning, I had one of those conversations that only ever takes place in a foreign country after getting into the lift with an old Spanish guy holding a paper.

"Messi, ohhhh!" he said, pointing to the front cover. Aware of my linguistic limitations, I responded in kind with "Messi, ohhh". I thought that would be it but he took it up a notch... "Messi, Messi" he said smiling.

I smiled back, lifted my shoulders into the universally acknowledged "how do you stop him?" position, and hit him with my own double "Messi".

He seemed to find this hilarious and kicked an invisible ball with his left foot before announcing the inevitable "Messi, Messi, Messi". Just when I thought this could go on for the rest of my life, the lift went "ping" and the doors opened.

Fraser, Gout and I headed for the Barca training ground. Gerard Pique was holding a news conference to launch his autobiography while there was also talk of an interview with Yaya Toure.

When we got there, the club's press officer took us to one side to explain that Pep Guardiola had cancelled all interviews because he didn't want players talking about their next game - El Clasico against Real Madrid. Our faces dropped until he told us that our one-on-one with Toure would go ahead but in a quiet corner away from the rest of the press. We were ushered into a little room overlooking the training pitches.

Practising were Messi and Xavi - the night after the destruction of Arsenal. Standing four feet away from them was an upside down stool. Try to visualise this if you can: they had to chip the ball into the legs - first with the right foot and then the left - before they could shoot at the keeper. Despite the temptation... neither took a shot at goal until they had landed two balls in the stool.

It was a fascinating exercise to watch them do it time and time again and a real insight into the attention to detail that has made Guardiola's team so good to watch.

Toure turned up 30 minutes later and was a true gentleman. He reminded us that the boss would kill him if he mentioned the Madrid match so we talked at length about Barca, Messi, his own career and, of course, his brother, Manchester City defender Kolo.

You can watch the interview here, as well as a behind-the-scenes piece from the Nou Camp...

We thanked Toure for his time and were told that Pique's press conference was about to start and to expect one or two surprises! As we made our way to the room, we were followed by a guy who looked a lot like Thierry Henry... it was Thierry Henry!

Behind him was Carles Puyol, Andres Iniesta and Victor Valdes, then came Zlatan Ibrahimovic, Bojan Krkic and Messi. Soon the entire squad and coaching staff were in attendance, cheering Pique along.

I had been told the Barcelona team spirit was something special. This was clear evidence that it was. The players sat there for 30 minutes, laughing and joking, before giving Pique a standing ovation when his conference was over.

I remember turning to Gout as the players were leaving and saying "this is bonkers", but the press conference we attended the following day made that one look positively dull. If you want to read about that, as well as a tale of cancelled flights and a bizarre interview with Charlton and Cruyff, you'll have to come back next week.

Barcelona is a wonderful and peculiar club. Lots of people seem to think it's a framework for others to follow but history and local politics have provided a special bond in Catalonia - a bond that is centred upon the Nou Camp. Support comes not only for the brand of football but for what Barcelona represents. I am not sure it could, or would, work anywhere else. As always, your comments and thoughts are most welcome.