Hello everyone. I hope you enjoyed the programme on Saturday as we went on the road for the sixth time this season. Wembley was a little different to the other stadiums we have been to so far. You need two coloured wristbands and a high-visibility jacket before you can even make it to the toilets let alone the pitch.

I have got a bit of behind-the-scenes action for you later but I wanted to start with something I am getting increasingly worried about. I had a phone call this week from the Match of the Day podcast team who wanted to get my views on England's three problems positions: goalkeeper, left-back and Wayne Rooney's strike partner - if he needs one.

I don't think we need to worry too much about left-back if Ashley Cole is fit and Rooney could play up-front with Scooby-Doo and still shine. It's the keeper that concerns me. I know Capello went with Bobby Green against Egypt but my worry is that David James will be number one in South Africa. He's a fantastic keeper, but I can't help feeling history is going to repeat itself. Older stoppers have scuppered England's chances twice before.

In 1990, a 40-year-old Peter Shilton was unable to pounce high enough to prevent Andreas Brehme's deflected free-kick going over his head. Then in 2002, a 38-year-old David Seaman, who has been impregnable in Euro 96, suffered from the same lack of agility when Ronaldinho curled one in from 700 yards.

James turns 40 in August! I know we are not blessed with an outstanding candidate but I would go with Joe Hart or Paul Robinson as my number one. Hart is in incredible form and Robinson finally seems to have banished the bobbly Croatian pitch from his memory. 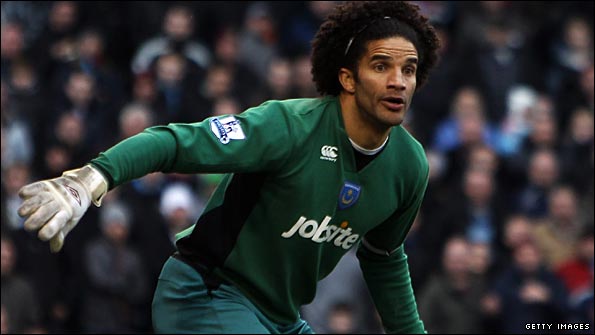 David James - will he be England's number one in South Africa

Don't get me wrong, James is a solid option, he's a great interviewee and his current haircut borders on the inspirational. But do we really want the enduring image from another World Cup to be the England goalkeeper sitting on the goal-line, shaking his head, while some bloke wheels away thinking "how on earth did I score from there?"

Anyway, rant over. Back to Wembley. We spent almost seven hours there on Friday, filming the opening, the first half of Friday Focus and some other bits and bobs.

The highlight of the day was fish, chips and mushy peas from the staff canteen. For pudding, I fancied something a little exotic and was drawn to a Toffee Crisp. The first bite took me straight back to my childhood. All I needed was a bag of Refreshers, a poster of Glenn Hoddle and a DVD of the Red Hand Gang and it could have been the late 1980s!

The Toffee Crisp has jumped from chocolate obscurity right back into my top five bars, vying for top spot along with the Twirl, Crunchie, Double Decker and Creme Egg - not technically a bar, and much smaller than the olden days, but still a winner.

The following morning we were back at Wembley at 0930 GMT. The bacon sandwich - picked up by Mr Lawrenson from a greasy spoon around the corner - was brilliant. The torrential rain that lasted throughout the morning was not so wondrous.

I don't know what the meteorological term is for rain that comes back at you off the floor but the "bounce factor" had my suit trousers drenched from the knee down within about 60 seconds. Thankfully, the downpour stopped at midday and the sun came out at Wembley about two minutes before the show started.

Dwight Yorke had only arrived in London from the Caribbean on the Friday and looked decidedly miffed by the British weather before the sun burst through and lifted the temperature to a heady 14 degrees... just 26 short of Trinidad!

Anyway, you should have seen Yorke's face when he saw that Wayne Bridge had refused to shake John Terry's hand at Stamford Bridge. Yorke had spoken to his old boss Sir Alex Ferguson that morning and bet him £5 they would. "The gaffa gets everything right," was Yorke's response.

After the show Yorke asked Lawro if he wanted to join him and Brian Lara on a night out in London. Lawro decided to go for the slightly less showbiz option, taking a taxi back to TV centre with me!

We got there in time to watch the rest of the Chelsea match with Alan Shearer and Alan Hansen. "Who did that impression of Al?" said Shearer, referring to the impersonation of Mr Hansen at the end of the Focus. "I bet that was Pete," said the other Al. He was referring to producer/director Pete 'Nicest Man in TV' Andrews, who has been mentioned a couple of times on this blog before.

He was right. Pete once won a Hansen-off at a World Cup judged by the man himself. Hansen gave him 8 out of 10, but I think he's closer to a 9.

If you fancy a look around the BBC studio at Wembley - and another chance to judge Pete's Hansen for yourself - then take a look at the latest behind-the-scenes video.

We have another Focus 5 this week so feel free to send your suggestions in for suitable topics of discussion. The art of tackling - in the wake of the Ryan Shawcross-Aaron Ramsey incident - caused a heated debate between Martin Keown and Garth Crooks in the Focus meeting this week so that might make the cut.

Your thoughts on last Saturday's programme, England goalkeepers, Toffee Crisps and great nights out that you've turned down (keep them clean) will also be gratefully received.