Prince Charles, Alastair Campbell and me

Greetings, brothers and sisters. This blog is all about last week's trip to Burnley, which started off in one of the worst hire cars in history.

The cuboid beast had a sizeable dent in the driver's side and the door didn't actually fit. Once I hit the big 70mph (and no more, officer), the wind was howling through the wagon and I had to have the radio on full blast just to hear it.

The heady combination of honey-roasted cashew nuts and custard creams kept me going until I got to the M6 toll, at which point I stumbled across a late-night radio debate about deaf cats that got me through Staffordshire.

The following morning didn't start particularly well. We were due at the ground for the visit of HRH Prince Charles at 9am. Producer Pete 'Nicest man in television' Andrews and I met for a power breakfast at 7.30am.

The waiter arrived with a fully fried number but as he passed it to me I inexplicably threw it on the floor. I blame the excitement of seeing a black pudding. The bloke rolled his eyes and returned to the sanctity of the kitchen to probably do something terrible to breakfast number two! I still ate it.

We made for the ground and filmed the arrival of the future King of England. As he left, his final words - to a man bedecked in claret and blue - were, "Is one at home tomorrow?" He needs to work on the football lingo. 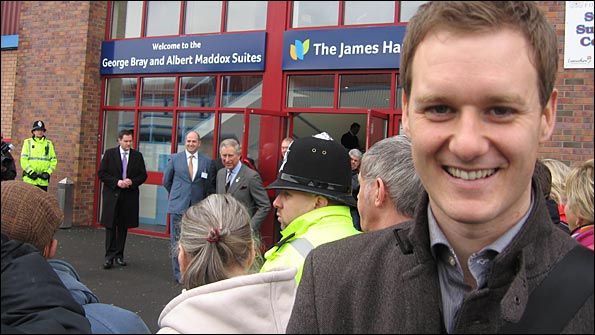 Me and Prince Charles - he's in the background

Lawro turned up about 3pm to film Friday Focus. It wasn't long before he was fielding the first phone call asking for his views about John Terry's demotion as England captain. For the next two hours, I took on the role of Lawro's secretary. You can tell a sports story is big when BBC Radio 4 want a piece of it - theirs was one of six interviews he did between 3.30pm and 5.45pm.

Back at the hotel, I had a good chat with Burnley manager Brian Laws before dinner. What a nice fella he is! He was staying at the same place and told some great stories from his playing days. He also bemoaned the lack of personalities in the modern dressing room.

The rest of the Focus crew turned up about 8pm and I retired to room 704 at about 11.30pm to write out the all important cheat sheet for Saturday's show. The next morning we were up bright and early - there were no breakfast disasters - and the show went off without any major hitches after we got to Turf Moor.

The programme buzzed by as usual, and for the second week running we had to rip up the running order on Friday and talk Terry at the top. Laws told us he got married in the trophy room, Matthew Upson said relegation hasn't crossed his mind and Alberto Acquilani claimed his English is better than Jamie Carragher's!

After the show, we went to thank the Burnley chairman for giving us free reign at his club. The conversation went like this...

Barry Kilby: "Thanks for that, really enjoyed the programme. Hopefully you'll bring us some luck today. Can't believe you went on about the sausages (with reference to the butchers where the bangers are named after players)."
Me: "It's funny you should say that because I got an email from Alastair Campbell yesterday telling me he didn't want to see any chimney stacks on Focus... he didn't mention sausages!"
Barry Kilby: "Be careful what you say... he's behind you!"
Sure enough there he was eating a Yorkshire pudding]
Alastair Campbell: "Hi Dan, I watched the first part of it in a service station. Well done for avoiding the chimneys."
Me: [Not entirely sure what I said next because I was ogling his Yorkshire pudding].
Alastair Campbell: "I've just had a text message from Tony Blair saying 'Are you watching Focus? It's all about Burnley.'"

Apparently, the former PM is an avid viewer ever since he appeared on the programme a few seasons ago claiming that Arjan De Zeeuw was his favourite player.

By this stage, I had started drooling and thankfully Barry extended an invitation to join him for dinner. It may well have been because Jimmy Anderson was there, but I was happy to hold on to his cricketing coat-tails. We conquered the roast dinner and then Jimmy produced a request that caught us all off guard when it was time for pudding...

"Can I just have a bowl of custard, please?" he asked. When I enquired about his slightly odd choice, he replied: "I just love the stuff." Sometimes he takes a pot out of the fridge, sticks it in the microwave for 30 seconds and nails it. I have a deep admiration for custard, but I don't think I would ever go that far.

Just before we went out to watch the game, someone came over and in slightly hushed tones said: "The chairman has spotted that you aren't wearing ties." We took it to mean: "Get these on you clowns, you're messing up the joint." I was happy to oblige because everyone at Burnley had been so welcoming and helpful.

The game was a great watch and I had a perfect view of Brian giving one of the finest displays of fist-pumping ever seen on the touchline. When Daniel Fox made it 2-0 with a free-kick, the Burnley boss treated us to three in a row and. Just when we thought he'd finished, he threw in the biggest one of the lot. Tremendous.

Just before we left, I managed to squeeze in a little behind-the-scenes action for you over by the press room/interview area. I hope it hits the spot. Get those comments in.