I have some revelations to make this week. Don't worry, it doesn't involve me wearing an ill-fitting shirt and looking down the cameras every time I say sorry. While Tiger Woods was apologising to his sponsors last Friday, I was in Manchester talking to Emmanuel Adebayor.

A captivating interview with a footballer is quite rare. Normally you can't see beyond the fog of clichés and there is precious little to stir the soul. When the Togo captain stepped into the room last week, things were very different.

I don't know what you think of the Manchester City striker but here is a bloke who texted his mum to tell her he was going to die on that coach in Cabinda. I think it was Samuel Johnson who said "nothing concentrates the mind like the prospect of death". Adebayor may not have been shot on 8 January but two people on that bus died and the mental scars he carries run deep.

I was actually on holiday last week. The day before I went on leave I was told about the prospect of a chat with Adebayor. Various BBC departments had been trying to speak to Adebayor since he returned to Premier League football, but it was decided that Focus would do the interview for the entire corporation. 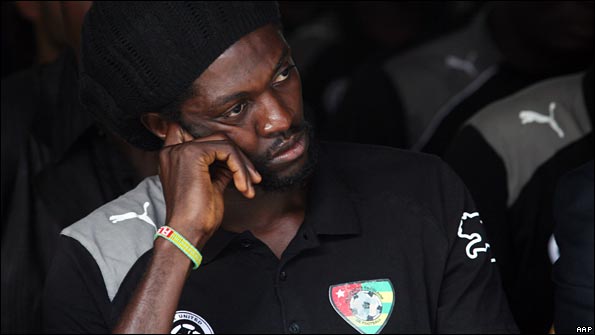 An interview with Adebayor was a big prize for the BBC

My wife, family and I had disappeared to deepest, darkest Derbyshire for a break with some mates last week. So, after tackling the Heights of Abraham on Thursday, I left for Manchester early on Friday morning after a pain au chocolat/banana breakfast.

There was a brief stop at services to pick up sweets and my sugar high almost persuaded me that giving four men dressed as nuns for charity a lift to Carlisle was a good idea before I considered what my bosses would say if I ended up missing my date with Adebayor as a result.

I knew there was quite a lot riding on this interview. In the morning I'd had a phone call from BBC World Service to make sure I was going to ask a certain question on their behalf, while a satellite truck had been positioned outside the ground to send the interview back to Television Centre for use by the News channel, Radio 5 live, the BBC Sport website and the News at Ten.

We set up in the chairman's lounge - a spectacularly snazzy room that only needed a giant fish tank to complete the Bond villain checklist.

Adebayor was due to meet us at 1600 GMT after completing a signing session at the club shop. At 1615, press officer Simon turned up to inform us that the session had overrun slightly, before disappearing to perform one of the greatest jobs available... moving Adebayor's brand new Bentley from one side of the stadium to the other.

As a Christian myself, I found it fascinating to hear how Adebayor's faith in God was strengthened by what he went through. It certainly wasn't a usual interview, we were 15 minutes in before City's forthcoming game against Liverpool came up!

When it was over - and while the tape made its way to the satellite truck - I told Adebayor that Zlatan Ibrahimovic was also on the programme and mentioned there was a healthy debate currently going on my blog about the Swede's "quality" (or lack of it).

Adebayor assured me that "Ibra" was a great player but spoke about the extra level of class needed to shine in the Champions League and international football. He explained how he felt "totally lost" when he first played against the big boys and that it took him 18 months to score in the Champions League. When he finally broke his duck, he said it was like no other feeling on earth!

I asked if he had ever been star-struck by another footballer. A wide grin came across his face. "Messi," he said with a deep joy. "I went out to see Thierry Henry in Barcelona," he continued. "He told me someone else was coming to dinner and all of sudden Messi walked in. He looked so small, so insignificant, and yet to me he was the world's greatest player. For a moment, I wasn't even able to speak."

I explained I felt the same way when I saw the Chuckle Brothers outside Crawley Leisure Centre in the early 1990s but when he looked at me blankly I knew I had gone too far.

As we shook hands as I made to leave, I remember thinking "he's just a normal bloke". Ten seconds later I watched him drive off in his Bentley while I was strolling towards my P-reg Saxo!

Within a few minutes of starting the drive home, I was listening to the interview on 5 live. Within an hour, I was back at Knutsford purchasing another bag of Percy Pigs.

I was very impressed with Adebayor. It would be good to know what you made of it.

Just a reminder, the whole of Focus comes live from Wembley this Saturday on Carling Cup final weekend. Let me know if there's a part of the new stadium you would like to see and I shall do my best to deliver the goods.