Martin, me and the Focus 5

Martin Keown went to Arsenal's training ground to interview Sol Campbell last week but had to hang around for a while as Sol was having a massage.

When he finally got back to BBC Telelvision Centre, Martin and I made our way to the studio to record Friday Focus.

We sat down on the steps at the front of the set and, while the cameraman was setting up, Keown - mid tuna sandwich - had something he needed to say...

Martin: "I read your blog this week Dan. [chomp] Do you write that yourself?"
Dan: "Yeah."
Martin: "We need to do some work on that, don't we?"
Dan: "What do you mean?"
Martin: "What was all that rubbish about sandwiches? [chomp]
Dan: "I'm just trying to make it a little different. Plus, everyone loves a sandwich don't they?"
Martin: "I don't [really big chomp]. We can make it a lot better."

On Tuesday, he collared me after our weekly programme meeting and gave me his five steps to blog success:

I told him we've been doing that all season, but he just gave me the eyes. I felt a little bit like Ruud Van Nistlerooy after he missed that penalty at Old Trafford in 2003. 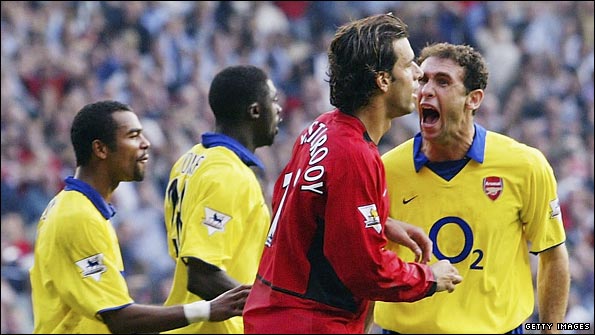 Martin Keown has a 'conversation' with Ruud van Nistelrooy

He didn't jump all over me with his arms in the air, but I had been well and truly 'Keowned'. Those of you who regularly read this blog will hopefully know that I welcome a bit of feedback, so when I told Martin this week's subject matter (which ticked number three on his list of five top blogging tips) his reaction was: "That's more like it, Dan. Keep working along those lines and you might get somewhere."

One of the things we're keen to do on Focus this season is try out new ways of doing things. If I was a business manager, I would probably use the phrase "blue-sky thinking". But if those words ever pass my lips, you have permission to spear me in the face.

Anyway, we've had some interesting guests on the sofa, the likes of Phil Brown, Robbie Savage, Gary Megson (the week he was sacked) and Gareth Southgate. I really enjoyed chatting to John Hartson on Saturday. Top bloke from the minute he arrived in the building and an incredible story of survival against all the odds.

We got hundreds of emails and tweets for John. When I showed them to him at the end of the programme, he was genuinely touched. He told me he'd love to come back on the show before the end of the season.

Perhaps the biggest change we've made this season is going out on the road. Editor Mark Cole and I made the trip to Burnley last week to prepare for our next out-and-about show on 6 February. That's when West Ham are in town. Preparations are coming together nicely. We've even found a butcher who names his sausages after members of the Burnley squad! Brian 'The Beast' Jensen is about twice the size of all the others.

Anyway, this week we're trying something that we have not done before. Ladies and gentlemen, I give you... 'The Focus 5'! For the final five minutes of the show, Lawro, Dixon, Keown and one of the Score pundits to join us for a quick-fire debate about all things football. 5 topics, 5 minutes, 5 people. Now you know why it's called 'The Focus 5'.

It might work and become a regular feature, or it might be a shambolic affair that never sees the studio lights again. You'll have a role to play, too, because the 'new' thing about this initiative is that we are not picking the subject matter. You are.

So if you have spent any part of the last few years complaining about what's on the programme or thought we missed a trick by not covering something, this is your chance to wield your editorial pencil. You can send your suggestions as a comment below or you can bung them on my Twitter page.

Obviously, we choose the five questions, but this could be the opportunity you've been waiting for. Hopefully, this satifies Mr Keown's blog cravings.