As @RyanBabel, @Carlton9Cole, @WayneRooney, and @jack_wilshere know all too well, the trouble with high-profile tweeting is that comments forged in the heat of the moment can, when viewed in the cold light of day, appear rash and unwise. Even a 'DM' can come back to bite you, as @RioFerdy5 discovered last week.

Humiliation, condemnation and even a hefty FA fine can swiftly follow.

But spare a thought for @theboyler. His injudicious tweeting cost him his job, and set in motion a chain of events that have now become one of the most emotive issues in the sport and even the subject of a Facebook campaign.

Dave Boyle was, until the weekend, Chief Executive of Supporters Direct (SD), the organisation born out of the policy commitments of the previous Government, and which encourages fan ownership, helping supporters to establish trusts like the one which now owns 20% of Swansea City.

Boyle had worked on many campaigns since joining SD in 2000, including the founding of AFC Wimbledon.

Following the phoenix club's hugely symbolic promotion to the Football League, Boyle got carried away and, in heady celebration, tweeted some obscene and offensive remarks, directed at MK Dons Chairman Peter Winkelman, a central figure in the original Wimbledon club's relocation to Buckinghamshire, along with a lawyer who had been involved with the decision to allow the move. 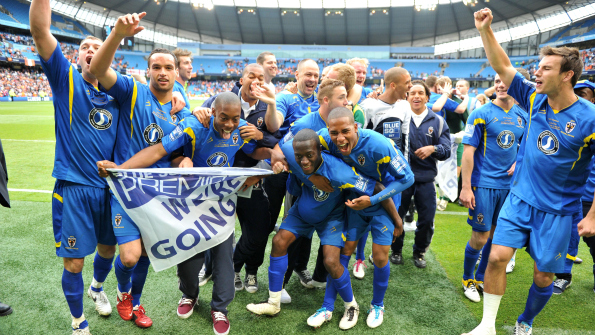 Supporters Direct and Dave Boyle worked closely with AFC Wimbledon to assist the club in getting promotion to the Football League. Photo: PA

Then matters got more serious. The Premier League-financed Football Stadia Improvement Fund (FSIF) on which SD depends, felt that Boyle had not been disciplined adequately, and concluded it "no longer had confidence in its (SD's) leadership and judgement". Boyle resigned, but funding of £1.2m was then withdrawn, putting SD's very existence in jeopardy.

So how much does SD matter, and should we care about its plight?

As this excellent blog by my colleague Matt Slater proves, the fan-ownership movement in football (and more recently rugby league) has had its fair share of ups and downs. But what is certain is that over the last decade, SD has helped establish nearly 200 supporters' trusts and has close to 300,000 members, forging a democratic model for mutual fan involvement. In doing so, it has managed to accumulate an enormous amount of knowledge and expertise which supporters groups can tap into when it comes to the often overwhelming task of saving their club from crisis and potential extinction. How to quickly establish a trust as a legal entity, raise funds, find a decent insolvency practitioner, deal with creditors. SD had the answers, and developed a model that proved invaluable to countless fans from as far afield as Chesterfield and Chester to AFC Wimbledon and Wrexham.

SD's supporters insist that not only is the organisation essential, it represents good value, with just 9 staff, 2 offices and a total annual budget of £800K. SD match-funds the start-up costs of new trusts up to £1k and pays the registration fees trusts must pay to become industrial and provident societies. It recently arranged a volume deal with a Manchester firm to do this, a good example of how their collective knowledge and bargaining power helps.

Quite apart from the advisory and financial role it carries out, at a time when the sport continues to find financial prudence difficult to achieve, SD's ethos of living within one's means appears as relevant as ever.

Supporters of SD stress that its campaigning work is far from over, with the goal of proper supporter representation on every board still a long way off. SD, they stress, must keep making the case for sustainability at a time when there have been more than 50 insolvencies in professional football in the last 20 years.

Others however, believe that SD's work is now done, and that the sport can survive without it. After all, the FSIF says that funding is still available to individual trusts, who can apply directly on a case-by-case basis rather than through the conduit of SD. This could be satisfactory for an established body like the Arsenal Supporters' Trust, led by highly-qualified and well-connected finance and media professionals. Perhaps less so at somewhere like Southend or Telford where SD's guidance has proved crucial. SD would also argue that such a system would encourage trusts to toe the Premier League's line.

Some have suggested that SD, as the one true voice of fans, was becoming a thorn in the side of the Premier League, whose leadership gleefully and callously exploited the opportunity that Boyle handed them to remove a talented critic, and put the organisation firmly in its place. Despite its official neutrality on the issue of ownership models, few would deny that the capitalist outlook of the international billionaire investors and sugar-daddies that own most Premier League clubs are at odds with the community-based philosophy that SD promotes. Some would add that the League's concerns over SD's governance is a little rich given their handling of crises at Portsmouth and West Ham in recent times.

For years Boyle was granted the license enjoyed by a student politician, tolerated by those who disagreed with him but who felt unthreatened. But with the DCMS inquiry into football governance expected to strongly back SD's demand for greater fan power, and the recent success of clubs with prominent trusts like Chester, AFC Wimbledon, Telford, FC United and Swansea City boosting SD's cause yet further, did Boyle and his colleagues get too influential, too popular with the media and politicians? In short, did the Premier League feel that the organisation it financed had got too big for its boots?

The League strongly deny this, pointing out that they have generously funded SD when no one else wanted to, praising its "commendable" work, and stressing that the decision to withdraw funding was taken in conjunction with other FSIF Board members. Spokesman Dan Johnson told the Guardian, "No one at the Premier League or in the broader football authorities is anti the Trust movement. The FSIF funding pot remains intact for the broader Trust movement - whether that includes SD or not going forward depends on meetings yet to be had."

Others will argue that the funding SD receives is little more than 'guilt money', and that the Premier League deserves little credit for buying goodwill, the very least the Premier League, with its annual revenues of £2bn, should do. But there is little doubt that many find it surprising that SD was so compromised by depending on the Premier League for its money, and should have found alternative, more independent sources of finance. Has its leadership brought all this on themselves, they ask, by being so vocal in their criticism of the way football is run, and biting the hand that fed them.

For what it's worth, my understanding is that talks between SD, the Premier League and the FSIF have every chance of reaching an agreement in the coming days, and funding could well be restored, saving SD and the jobs of those who work there. Certainly is not in the Premier League's interests to be accused of spitefully bringing down such a well-regarded body as SD just weeks before the Government makes recommendations on how the game should be run.

Those of a more cynical disposition may argue that this was the Premier League's intention all along, enabling them to gain the moral high ground at the perfect time while reminding their opponents exactly who is boss. Others will simply see the reinstatement of funding and the salvaging of an important organisation as a victory for common sense.