Why Rooney changed his mind

Wayne Rooney's remarkable decision to change his mind and stay at Manchester United hung on a phone call with co-owner Joel Glazer.

The discussion, which took place on Thursday afternoon, was reminiscent of a conversation John Terry had with Roman Abramovich when the Chelsea captain was talked out of leaving for Manchester City last year and it saw Rooney finally receive the assurances he required over future investment in the club's squad.

The phone call between star player and owner could be the most important element of a traumatic week for Sir Alex Ferguson, if it does indeed usher in a renewed period of spending by the club despite its £720m debts. 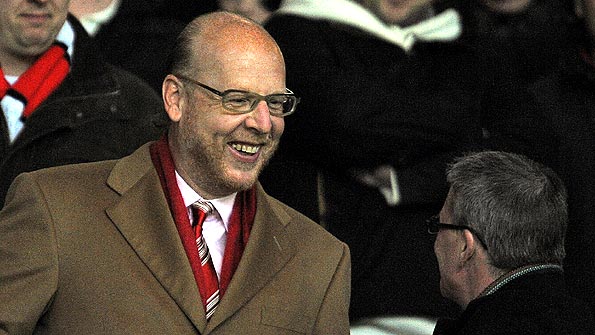 United co-owner Joel Glazer, and his brother Avi, have come in for a lot of criticism Photo: Getty

The first seeds of a U-turn were sown earlier that day, when Rooney spoke to Ferguson at Carrington, United's training complex. Prior to that, events the previous night had given the player pause for thought.

On Wednesday evening, Rooney had overshadowed the Champions League match against Bursaspor by confirming in a staggering statement his desire to leave United.

It publicly disputed his manager's version of events, and effectively accused the club of stagnation. Sources close to Rooney suggested there was no going back, and the statement seemed to confirm it.

However, fierce anti-Rooney banners in the stands during the game, the sinister visit of a gang of hooded members of the Manchester Education Committee group of hardcore fans to his Prestbury mansion, and an ominous death threat scrawled over the facade of a local Nike store had made Rooney think hard about his stance, and the consequences of a mega-money move to arch-rivals Manchester City.

For the first time since contract talks had stalled in August, Rooney was prepared to at least look at what United would offer him to stay.

At 1145 BST on Thursday, having persuaded Rooney to reconsider and talk directly to the most senior member of the Glazer family once Florida had woken up, Ferguson drove out of the Carrington training ground past the ranks of camera crews and journalists camped outside.

Rooney went home via a discreet back entrance to the training ground and asked his agent, Paul Stretford, to attend meetings at Old Trafford with Ferguson and chief executive David Gill. A conference call with Joel and Bryan Glazer was set up to inform them of events.

Ferguson stayed at Old Trafford for little more than an hour before leaving Gill and Stretford to thrash out the deal.

Negotiations did not take long because Gill had prepared the deal back in August.

This, however, was the first time Stretford and Rooney had given the club a chance to put a contract on the table. Win bonuses and other variables mean the five-year contract is worth between £150,000 and £180,000 a week.

Rooney then spoke directly to co-Chairman Joel Glazer, who told him United would remain in the market for the world's best players despite the departures of Carlos Tevez and Cristiano Ronaldo last year.

Having had the conversation, Rooney told Stretford of his desire to change his mind.

With solicitors from Manchester-based firm Brabners Chaffe Street working on the legal aspect of contract overnight, a holding statement was issued by the club at 1900.

The deal was finalised on Friday morning, with United confirming the news at 12.37 before Rooney signed the contract at Old Trafford and told the fans of his astonishing change of heart via MUTV.

The precise details of Rooney's chat with Glazer and the promises he was given by the American owner will remain a mystery, but having appeared to hold the club to ransom in such an apparently ruthless fashion, all but written off his team-mates, and accused his manager of getting his facts wrong, Rooney could now struggle to repair the damage done to his reputation, a reputation already stained by allegations of lurid off-field antics, and a dramatic loss of form.

Rooney had a point when he voiced concerns over United's ability to compete with richer, less indebted rivals. But by performing his volte face so swiftly, he leaves himself wide open to accusations of greed and brinkmanship.

United's image could also be in serious danger of being affected by the saga. Many feel their willingness to bend to Rooney's demands in a way the club has never done before for any player is unbecoming for a club of their stature.

Had Ferguson done what many expected and wanted, and shown the striker the door, he would have lost a great player and given a boon to those who believe the club, under the Glazers, is on the decline.

Rooney might joined Manchester City to the distaste of United's followers, but at least their pride and trust in the integrity of the club would have been preserved.

Many feared that if Rooney was allowed to leave, despite what he said this week, United's standing in the game would suffer. By allowing him to stay, the damage done could in fact be much worse.