It seems supporters of Liverpool have been inspired by the way Barack Obama harnessed the power of the internet to reach the White House in 2008.

By using social media sites, blogs, viral email campaigns and online video, the then US presidential candidate generated a massive network of supporters via cyberspace. Now the Anfield faithful are attempting to do something similar as the club's ownership saga reaches a crucial moment.

With the mid-October deadline looming for Royal Bank of Scotland, Liverpool's main creditor, to decide whether to take control of the club from Tom Hicks and George Gillett, fans are intensifying their campaign to oust the American owners.

By using the internet to mobilise 'fan power' and lobby financial institutions who may be in a position to help Hicks and Gillett stay in control at Anfield, supporters hope to force a sale and have a significant say in the future direction of the club. 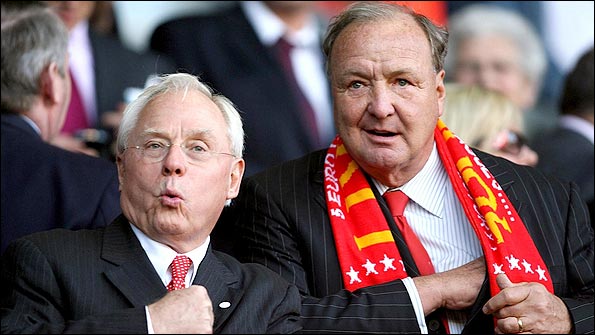 George Gillett and Tom Hicks have proved to be very unpopular with Liverpool fans. Photo: PA

Last week, as he sat on a Manhattan bench outside the offices of investment banks JP Morgan and Deutsche, Hicks was photographed by a Liverpool fan. The image was sent via Blackberry to the supporter's wife, who posted it on her Twitter account.

Thousands of miles away in Liverpool, taxi driver Alan Kayll, a leading member of the independent supporters' group Kop Faithful saw the image and quickly went to work. He drafted a letter urging the banks to refrain from lending Hicks any fresh finance and posted it, along with e-mail addresses of bank executives, on the internet. Soon hundreds of e-mails were bombarding the inboxes of senior bankers at both institutions.

Kayll denies the suggestion that this increasingly well-organised militancy may become exessive, and harm the reputation of the club. The front page of Kop Faithful's website features the logo of RBS drenched in blood, above a pledge that "We will go as far as we need to".

"We're not threatening anyone, we're simply trying to educate these bankers of the damage that Hicks and Gillett have done, not just to our club, but to our community" he says. "At Kop Faithful, our focus is the banks, preventing refinance to the existing owners and explaining to them why they should not help keep these owners in power.

"If we hear that Hicks is due for a meeting with a bank, within minutes we can mobilise via our forums and networks on Twitter and Facebook. Soon the bank's e-mail system will be inundated. We have the intelligence needed to keep ahead of the game. Liverpool fans are everywhere and, once we have the information, we can act quickly."

Hicks had just discovered that hedge fund GSO Capital Partners would not help him secure the £237m outstanding to the RBS. Once news of the Texan's negotiations with the debt restructuring firm had been leaked, Liverpool's fans had taken action.

"I have it on good authority that Stephen Schwarzman, the billionaire owner of Blackstone (which owns GSO) received 7000 e-mails, urging him to walk away from any deal," says Kayll. "I hear their computer system crashed, such was the weight of e-mails we managed to generate from fans."

The degree to which the viral campaign actually worked is difficult to assess but talks with Hicks promptly ended without agreement. Kayll is in no doubt as to the reason. "Our efforts were hugely influential," he says.

Kop Faithful are now directing their efforts towards RBS. Supporters have been invited to e-mail the bank, appealing to executives to decide against granting Hicks and Gillett a new loan extension and instead call in the debt and seize power at Anfield.

"Our worry is that RBS are earning such huge sums in penalty fees and interest payments that they will let Hicks and Gillett off the hook and give them more time," says Kayll. "We plan to exert as much pressure as possible on RBS between now and their decision in October. They are receiving 10,000 e-mails a week from Liverpool fans. If they grant another extension, I think it's the beginning of the end for Liverpool FC. It's that serious."

RBS may well still decide to refinance Hicks and Gillett, prolonging the Americans' tenure at Anfield, but Kop Faithful's campaign means the bank will now be aware that it risks provoking a boycott of the bank by Liverpool fans - and the potential loss of thousands of customers - if it does so.

Meanwhile, the newly-unified supporter group Spirit of Shankly-Share Liverpool is the focal point for the supporters' efforts. Now boasting more than 50,000 registered members worldwide, it is stepping up its aim of raising £50m to buy a minority stake in the club in partnership with any prospective new owner. 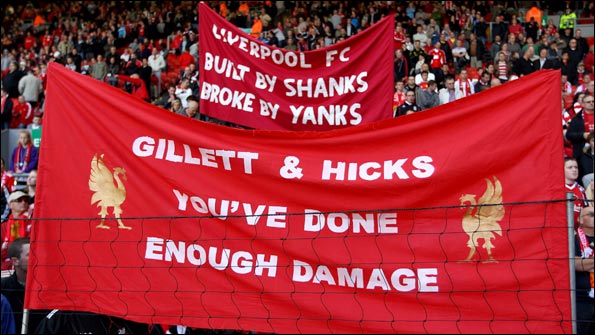 That push, the publicising of events like Saturday's sit-in after the Sunderland match and the march planned ahead of Sunday's game against Blackpool relies on online communication.

But in order to support and promote the efforts of SOS-SL, other independent fan groups like SaveLFC and Kop Faithful have sprung up. Sites and forums like The Liverpool Way, Red and White Kop, Anfield Online, The Rattle, This Is Anfield, Well Red and Anfield Road have all given normal fans a voice.

SaveLFC describes itself as "a consumer-facing, communications-focussed group aimed at promoting education and unity in favour of fit and proper ownership". It uses social media networks like Twitter and Facebook as well as its own website forum to keep its members informed of the latest ownership developments.

"We've focused on propaganda, viral content, and info-graphics to boost membership and illustrate what's happening at the club," says Roy Henderson, a 36-year old IT worker from Dundee and a leading member of SaveLFC.

"We've produced content in various media, including a video documentary. We have around 27,000 members who we're able to contact in an instant if there have been key developments."

The power of online propaganda has already been demonstrated along the M62. The Manchester United Supporters' Trust is working with Blue State Digital, the US internet campaign group whose email strategy helped Obama triumph two years ago. Tradition and heritage may be important to Liverpool's fans, but it is clear that they too are willing to embrace the latest forms of digital technology to aid their cause.

"The different groups are learning to work together and build a common platform that enables us to respond quickly with huge numbers of fans when news breaks, or when a good idea arises", says Henderson.

"It's amazing how many different people from so many different walks of life have come together. We have academics, finance experts, film directors, lawyers, writers, graphic-designers, even multi-millionaires.

"Using the internet there's now a mobilisation of Liverpool supporters, the like of which has never been seen before. Protest shirts have been designed, banner campaigns have been co-ordinated, a single has been released, online magazines have been published, media contacts have developed, and new technologies and media have mounted a successful global campaign to promote our interests.

"Many of us are well enough connected to know members of parliament and wealthy individuals personally. As such, we've seen the movement gradually become better integrated, funded, resourced and planned."

It may have taken time but it seems that, more than three years since Hicks and Gillett bought their club, Liverpool's fans are making their presence felt and momentum is gathering.

The power of the internet has already brought about the removal of one member of the Hicks family from the Liverpool boardroom. In January, Tom Hicks Jnr was forced to resign as a director after sending an abusive e-mail to Stephen Horner, a prominent member of Kop Faithful.

Liverpool's burgeoning fan movement will now hope their collective efforts in cyberspace can help bring about the departure of Hicks Snr, too.