What a difference nine weeks makes.

The last time Fabio Capello made a squad announcement (or rather we in the media did on his behalf via Twitter), it was on the eve of the World Cup and belief in the Italian was absolute.

Despite awkward, pre-tournament contract negotiations after a flirtation with Inter Milan, an embarrassing climbdown over the ill-judged player-ratings index that bore his name and uninspiring warm-up performances against Mexico and Japan, Capello was untouchable.

Bolstered by the most convincing England qualification campaign in living memory, he was widely considered to know best. Finally, England looked like genuine contenders.

Even when he took the decision to leave young, hungry match-winners like Theo Walcott and Adam Johnson at home, ignore in-form players like Scott Parker and Michael Dawson and break his own promises by taking injured players such as Gareth Barry and Ledley King to South Africa.

Capello's 23-man squad was chosen with one aim in mind: to win the World Cup. And who were we to doubt his selection?

But the days when the Italian's judgement was beyond reproach are well and truly over. After presiding over the worst-ever England defeat at a World Cup finals, Capello is extremely fortunate to be in a position to announce a new squad at all. 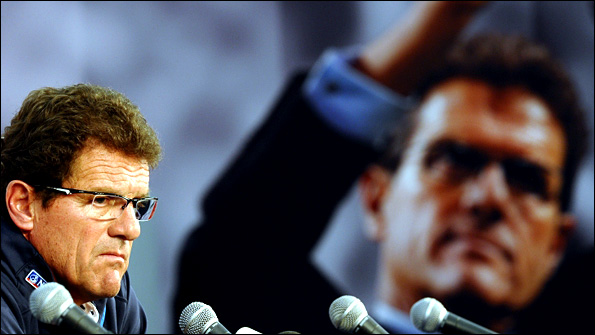 Despite David Beckham's insistence that England's players were to blame, Capello should have been sacked the morning after the debacle of Bloemfontein, not least for his intransigence over tactics and formation. Some believe the Italian was only spared because his employers were reluctant to pay the price of dismissing him and felt they had no obvious alternative to call upon.

For these reasons, the squad announced by Capello on Saturday for the friendly against Hungary at Wembley is arguably one of the most important of his career. Much more important than if this had been the victorious homecoming ceremony the FA no doubt dreamed of when arranging the fixture.

Despite cheaper ticket prices and a major FA marketing push, the match will not now be attended by thousands of England fans after the fiasco of South Africa. (Incredibly, however, of the 37 international matches in Europe this week, England's will be the best attended)

Sure, boos will be directed at those who underperformed and, like Wayne Rooney and John Terry, spoke out of turn in the summer.

The match is unwanted by many, with most Premier League managers wishing the game had never been arranged. There is no headline sponsor either after Nationwide ended their long association with the FA.

Yet, however unpopular a game it may be, it is a crucial one for the England squad. It must give a nation hope when there seems to be little, generate public interest in a sullied product and repair the tarnished reputation of the manager.

So has Capello now done enough in his selection to prove that he understands what went wrong in South Africa and is willing to take an uncharacteristically long-term perspective as he tries to develop a new generation of England players that might do better in Brazil in 2014?

In short, does this squad represent the fresh start that England and Capello so desperately need?

Some would argue that to properly usher in a new era, a headline-grabbing French-style culling was required, with at least several high-profile England stalwarts punished with exclusion.

Capello has gone as far as he felt he could and probably further than most of us expected him to. King, David James, Rob Green, Leighton Baines, Tom Huddlestone, Stephen Warnock, Matthew Upson and Shaun Wright-Phillips were obvious casualties.

Jermain Defoe, Joe Cole, Aaron Lennon and Peter Crouch can all count themselves slightly unfortunate given their limited chances at the World Cup. Nonetheless, their exclusions are welcome evidence that evolution, if not revolution, is genuinely underway. Lennon and Huddlestone will hopefully be angered by the snub and come again. Elsewhere, the usual, wearily familiar core of the England team has been retained.

Capello evidently feels that none of his world-class spine of Terry, Ashley Cole, Barry, Frank Lampard, Steven Gerrard or Rooney are expendable and must be retained to qualify for Euro 2012, along with captain Rio Ferdinand once he is fit.

Barry and Terry, in particular, are fortunate to remain after their awful displays against Germany, not to mention Terry's one-man rebellion after the draw against Algeria. But surely only Rooney will play in Brazil in 2014.

>Highlights of England's 4-1 defeat by Germany (UK users only)

None of Walcott, Johnson or Ashley Young are unknown to England fans but their recalls are evidence that Capello has learnt from the mistake of jettisoning the kind of young, fast, hungry players that did so well for Germany this summer. Gabriel Agbonlahor is unfortunate not to have joined them.

Having recovered from the broken foot that probably denied him a place in South Africa, Kieran Gibbs's first senior call-up is another symbolic and welcome step as he begins the task of becoming Cole's long-term successor at left-back.

But it is the inclusion of another of Arsenal's youngsters that will no doubt become the signature selection of Capello's squad.

Having been left out of the under-21 squad for the game against Uzbekistan, Jack Wilshere's promotion was an open secret but it will still capture the imagination of England fans who are desperate for fresh blood.

The 18-year-old cannot be expected to revive the national team's fortunes just yet. He has yet to start a game for Arsenal in the Premier League, while the London club's refusal to grant Cesc Fabregas his wish to return to Barcelona means Wilshere will find opportunities just as hard to come by in the team's midfield this season.

But having shone against Celtic in the Emirates Cup last weekend, the evidence is growing that Wilshere is the most exciting English youngster since Rooney burst on to the scene eight years ago. Arsenal boss Arsene Wenger's refusal to countenance another loan deal to Bolton is also evidence that he knows he has someone very special on his hands.

In goal, the omission of James is the right decision. He may have had a reasonable World Cup but, at 40 years of age and having retreated to the Championship, now is the right time to end his 13-year England career, regardless of his nightmare 3-0 debut defeat for Bristol City.

The 23-year-old Joe Hart should be England's goalkeeper for many years to come, Ben Foster, now at Birmingham City after wasted years as back-up at Old Trafford, still has plenty to offer, while Paul Robinson returns from three years in the international wilderness after Robert Green's meltdown in South Africa.

In defence, even if Jamie Carragher and King were willing or fully fit respectively, neither should play for England again, along with Upson.

Arsenal's interest in Phil Jagielka is proof of the quality and intelligence of the Everton defender, who, having been recalled alongside the rapidly improving Gary Cahill, must now challenge the injured Ferdinand for a place alongside Terry.

Dawson and James Milner were arguably the only two players whose reputations were enhanced in South Africa and both have vital roles to play for England over the next few years, in Dawson's case, perhaps as captain.

Darren Bent, Walcott and Johnson all did brilliantly by not being associated with the shambles, and on Wednesday all must show Capello precisely what he was missing.

It is difficult to get too excited by the recall of Wes Brown, although I find it heartening to see Capello has resisted the urge to choose Micah Richards. More interesting is the continued exclusion of Parker and Lee Cattermole, whose battling qualities England cry out for.

Michael Carrick would surely have been discarded regardless of his injury, along with the likeable but abject Emile Heskey, who thankfully spared Capello the job of dropping him by retiring.

Bobby Zamora's inclusion is fully deserved after an extraordinary season for Fulham and finally proves that Capello is willing to look beyond the elite clubs in the Premier League as he continues his search for a proper England number nine.

Carlton Cole also has the chance to compete again in this regard, although Newcastle's Andy Carroll is emerging rapidly as a contender and is pressing for selection.

Capello's brave new dawn must not stop with this overhaul. Wilshere, Cahill, Gibbs, and Johnson are merely a step in the right direction. Next, in future squads, must come the likes of Cattermole, Jack Rodwell, Dan Gosling, Phil Jones, and Ryan Shawcross.

Capello is a naturally conservative manager but this time he has no choice but to be bold, in both his team selection and tactics. No longer can he fall back on the tried and trusted 4-4-2 and the so-called 'Golden Generation'. Both are defunct and robbed of the aura of invincibility - Capello must look to the future.

Equally, he cannot be held accountable for decades of FA neglect when it comes to coaching and developing the country's young players. But despite the lack of depth, Capello has no choice now but to bring about real change.

On Monday, at a news conference marking the beginning of his second phase as England manager, Capello will finally give us his version of events and explain how this squad selection will help bring about a proper revival.

There must be no more talk of the Jabulani ball, goal-line technology, fatigue, playing with fear or altitude. The manager's English must also show proper signs of improvement.

Capello has been given a second chance and he must use it. Six weeks after his insipid post-defeat press briefing in Rustenburg, Capello must show what he is made of.

An air of revival and a sense of fun and pride are what he must instill in this new squad, this new England. Crucial Euro 2012 qualifiers against Bulgaria and Switzerland are looming. This match may be a friendly but is far from meaningless.