Steven Pienaar could be forgiven for basking in the limelight of an outstanding season that has seen him named Everton's Player of the Year and attract the interest of the biggest clubs in the Premier League.

But, as the midfielder relaxes in the end-of-season sunshine at Finch Farm, his club's multi-million pound training complex, his mind wanders to a place thousands of miles away from Merseyside.

To Johannesburg, where, in just a month from now, Pienaar will experience the defining moment of his career and perhaps his life.

At just 5ft 7in tall, he is small in stature, but Pienaar realises that, when he walks out for the World Cup's opening match, he must shoulder the weight of expectation that 30 million South Africans will place on the host nation's only world-class player.

"I'm getting more nervous now," he tells me. "You used to think it's still another year. Now it is weeks and soon it will be days. The closer you get the more tense you become. But I'm looking forward to it. I can't wait.

"For me, it's really tough because everyone expects you to do well. Of course, I want to do well every game I play. It is a lot of pressure, but it's OK. The team will always help me to cope.

"I think it will be a really special moment, not only for the players but for all South Africa and the whole continent, because it is going to be a day of history, like when Nelson Mandela came out of prison. For us, it is special because it is the first World Cup on African soil. We're going to make history."

Pienaar is looking firmly forward as the Rainbow Nation prepares to welcome the world. But come 11 June, the odd flashback is inevitable as he reflects on his own remarkable journey. Because home is just a few miles from the immense 95,000-capacity Soccer City stadium where South Africa face Mexico on 11 June.

Westbury is the notorious Johannesburg township where Pienaar grew up, survived and, through football, escaped.

"Of course, it was very tough to be raised by a single mother in a gang-infested area," he reflects. "Everyday life in a township in South Africa is gun-fighting, drive-bys, drugs going on around you, all sorts of things. But I was quite fortunate. I had a really strong mother who believed in us, wanted the best for us and made sure we always were kept away from the streets and all the bad stuff."

On Pienaar's leg is a permanent reminder of the reality of life in the ghetto. A tattoo, dedicated to the memory of a close friend he lost to gun violence.

"When I think back, I sometimes pinch myself because a lot of things could have happened while I was still in South Africa and I'm really fortunate I got the opportunity to make something of my talent and God created my path for me," he says. "I still can't believe it because it was only 10 years ago I was still in Westbury, so it's still in my head."

Having been invited to attend South Africa's School of Football Excellence, Pienaar graduated from Ajax's satellite team in Cape Town and quickly established himself with the parent club in Amsterdam. But the committed Christian is brutally frank about what would have happened to him if his sporting talent had not been noticed.

"Maybe in jail somewhere or maybe dead," he admits sadly.

Pienaar's tough upbringing make him better placed than most to judge South Africa's ability to stage a secure and safe World Cup, but he seems unconcerned.

"I think it is under control because the government is really working overtime to make sure," he says. "We know people have questioned South Africa about security, but there won't be any problems."

Pienaar left his homeland for Europe aged 18, but he is proud of his roots and is confident that the World Cup will help heal the scars of apartheid that so stubbornly remain. This a man aware of the way things used to be and the way they still are.

"Africa's got a lot of poverty," he says. "Through sport, that's the only way you can touch people. Fifa giving South Africa the World Cup is even more touching because the people can at least be happy for a while. I think Mandela said it once, sport brings people together, unites people. It did happen in 1995 so it can happen again now in 2010." 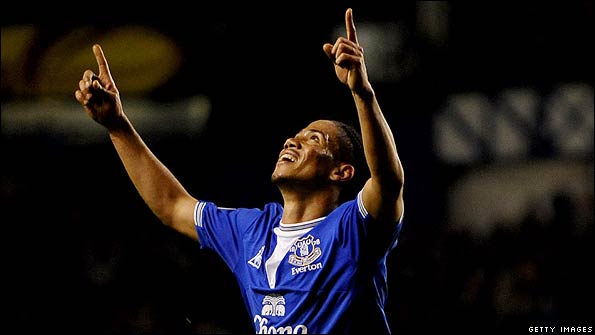 Steven Pienaar has been in excellent form with Everton

Having come from a neighbourhood that was created by the dark forces of apartheid, Pienaar is all too aware that the colour of his skin would have barred him from representing his country had he been born in a previous era.

"The World Cup will definitely improve people's lives," says Pienaar. "There's a lot of job opportunities now and I hope that the facilities will still be there for younger people to use them and make the country an even better place."

Pienaar knows there is no chance of elumating his namesake from rugby, Francois, and helping the hosts to actually win their very own World Cup. At 90th in the world, no host nation has ever been ranked so low and Bafana Bafana will seriously struggle to qualify from a group containing Mexico, Uruguay and France.

"We're ranked so low because of one thing: poor results," says Pienaar.

"But it's also a good thing because we know a lot of people don't expect anything from us, so that's for us to just go out and enjoy ourselves and make the best of it. If we don't qualify, I think people will be disappointed but it is a football crazy country, so I don't think the stadiums will be empty even if we are knocked out."

Pienaar is among that rare breed of footballer whose life experiences have given him a sense of perspective. Twenty years after the release of his hero from prison, this is a sportsman who knows what is at stake for his country this summer. Now, a decade after his own escape, the boy from Westbury is going home.