From the Alps to the top of the world

If Fabio Capello's intention was to get his squad away from it all, then he certainly chose the right place in Irdning.

England's pre-World Cup camp in the Austrian Alps is a vision of perfect isolation. Two hours' drive from the media's hotel in Graz, towering, snow-capped peaks surround the team's luxury hotel, the Schloss Pichlarn. A mile down the road is their training pitch, where, apart from a few security guards and curious locals, the players have the facilities to themselves. 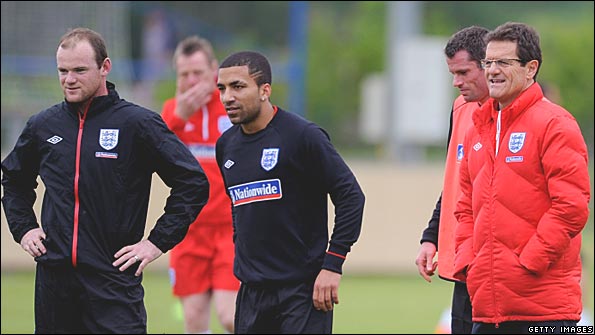 This is an opportunity to acclimatise to the thinner air England will discover in South Africa's Highveld, but also to leave behind the various controversies of recent weeks.

To move on from the Capello Index, Wembley's dodgy pitch and Football Association resignations, and focus instead on the United States, Algeria and Slovenia. Above all, to concentrate on winning the 2010 World Cup, rather than the right to host 2018.

And yet, as England granted the media access to their retreat for one day only, attention once again turned to recent events.

Midway through England's impressive training session (in which Adam Johnson and Tom Huddlestone stood out and Matthew Upson provided the only injury scare with a cut to the head), word spread that Capello may be willing, nay keen, to have his say on Lord Triesman's dramatic demise.

And so it proved as the Italian strode into the hotel's indoor tennis courts (converted to host a press conference) and waded into the story that has rocked English football.

This was the FA's first opportunity to fight back against the suggestion that their 2018 bid had been wrecked by the weekend's meltdown, and, far from avoiding the subject, Capello seemed only to willing to answer my questions on the scandal.

England, he stressed, remained the perfect place to host the World Cup, while his sadness at the nature of Lord Triesman's departure was obvious. Stung by Fifa's official inquiry into the affair, the FA is in damage-limitation mode, and Capello has now lent his support as they seek to recover.

But having had said his piece, Capello's final message was simple - it's time to get down to business. And there's a look in the players' eyes - and in the manager's, too - that tells you that this is where England's World Cup journey truly begins. Places in the final 23-man squad are up for grabs and the stakes are high.

Irdning seems a long way from Johannesburg, but it may be where the World Cup was won.