Fabio Capello was fooling nobody.

As the storm clouds gathered around Graz, England's manager left the UPC Arena and tried to convince the waiting media that he had been satisfied with England's performance against Japan; that his team had finally shown the "English spirit" he had demanded before the game, especially after half-time.

The harsh reality was that this was a lethargic display by an England side who turned up expecting to win comfortably, but who were shown up by a hungrier, fitter Japan, a team ranked 45th in the world.

Capello told me after the game that he now knows the identity of his 23-man squad, and will telephone his players on Tuesday morning to inform them if they're surplus to requirements. But this was another showing that raised more questions than answers.

England will look to the positives - that they eventually won (albeit without scoring themselves), that there were no new injuries, and that this was a merely a friendly. But they came dangerously close to a demoralising shock defeat, and Capello will realise that if England are to make an impact in South Africa, they must improve drastically. 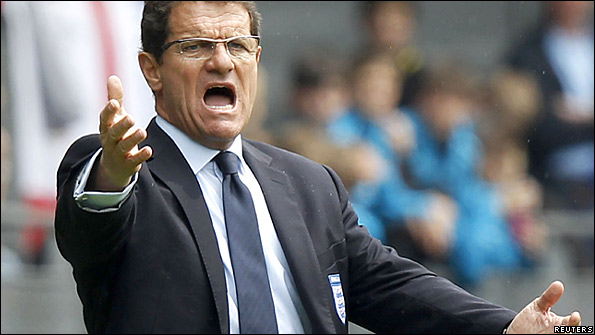 Capello will name his final 23-man squad on Tuesday

Of the fringe players desperate to stake a late claim for inclusion in the World Cup squad only Joe Cole, and perhaps Shaun Wright-Phillips succeeded. Darren Bent showed precisely why he was merely back-up to the injured Bobby Zamora in Capello's striker pecking-order, wasting a golden opportunity to impress his manager.

Tom Huddlestone is an accomplished passer of the ball but England lacked purpose and drive in midfield while he was on the pitch. In the space of a week, Milner, Carrick and now Huddlestone have all squandered their chance to take advantage of Gareth Barry's absence in central midfield, and Capello will be more inclined than ever to select him regardless of his speed of recovery from an ankle injury.

Gerrard would rather play in an advanced role but when he was introduced alongside Lampard, England improved considerably, and Capello will now conclude the Liverpool man is the best alternative in a holding role if Barry fails to make it.

After an inconsistent performance against Mexico, Theo Walcott was poor, and is now surely behind Aaron Lennon in Capello's thinking for a wide starting berth. Wright-Phillips injected typical hunger and intent once introduced, and Capello will have been impressed with Joe Cole's contribution in an area just behind Rooney.

Whoever Capello decides to take to South Africa, he must quickly work out why his side cannot seem to rediscover the scintillating form that saw them dominate their qualifying campaign. Those 4-1 and 5-1 thrashings of Croatia now seem a distant memory.

But if England continue to play as they have in their most recent two games, their World Cup adventure will be a short one.

England's match against Japan was played against a backdrop of confusion surrounding Capello's future as England manager. On Sunday the FA committed to emergency talks with the manager, aware that Inter Milan were actively pursuing the Italian as a possible replacement for Jose Mourinho, and offering him significantly more money than he is on as manager of England.

Capello is genuinely flattered by Inter's pursuit, and spoke to Sir Dave Richards, Chairman of Club England, by telephone on Monday morning from his mother's home in Italy.

I'm told the conversation was 'very positive' and that the manager 'received the assurances he wanted'. Capello now plans to sit down face to face on Wednesday before the England squad leaves for South Africa, and 'tie things up'. Richards believes Capello will honour his contract and stay, despite the interest from Inter.

The contract Capello signed with the FA is now two and a half years old, and runs until the 2012 European Championship, but a source close to the manager has told me there are 'a couple of legal things in the contract that could work better for both sides' and that 'he just wants to know who exactly he's working for' after the FA upheaval surrounding Lord Triesman's recent departure.

Capello was in the process of agreeing to remove a 'break clause' in the deal that would have enabled him to walk away after the World Cup when Triesman resigned last month. He now wants clarification with his new bosses, including new General Secretary Alex Horne who he will meet this week.

The FA insist the talks are not about money, but it appears Capello currently enjoys a very strong bargaining position, and it is ironic that the man he is talking to at the FA is now Sir Dave, Chairman of the Premier League.

The immediate threat of Capello returning to Italy seems to have been averted, but it is ironic that two days before England leave for the World Cup, Capello is in talks about a new deal; the kind of activity he has demanded his players refrain from until their business in South Africa is completed.